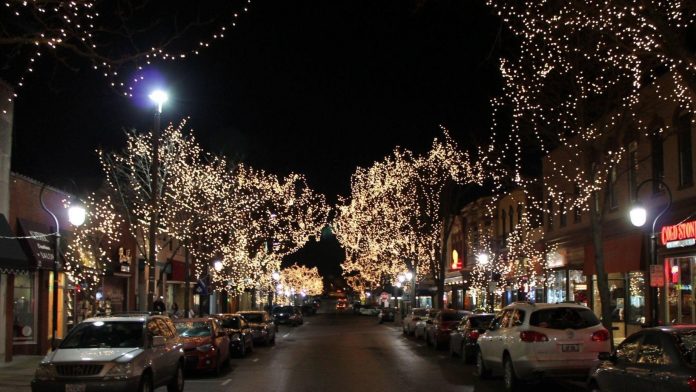 The trees lining the streets of downtown Naperville would be wrapped in new LED holiday lights and the Riverwalk’s covered bridge lit for the first time under a proposal going before the Naperville City Council this week.

Naperville already pays $195,500 to have Holiday Creations Pro Inc. illuminate some downtown rooftops, wrap streetlights with lit garland and put up street-level displays. The additional work would add $50,120 to the annual bill if approved Tuesday by the council.

The tree lighting has traditionally been done by city public works employees, and typically the lights go up in November and stay in place through mid-March. This would be the first time the trees would was outsourced to a private company.

“It’s going to look a little different from what people have seen in the past because the contractor is actually going to wrap the lights around the branches as opposed to the canopy style that has been done before,” said Kate Schultz, spokeswoman for the city of Naperville. “We’re also switching from the more traditional lights to LED holiday lights.”

“The goal of that is to connect all the lighting and activity in the core downtown with Naper Settlement,” Schultz said. Connecting the two areas creates a festive atmosphere and encourages people to enjoy the season throughout the entire area, she said.

Under the contract change, Holiday Creations would be responsible for installing and removing the lights and storing them between seasons. Switching to LED lights is a little more expensive up front, but they last longer than lights that have been used, city documents said.

“LED lights last a minimum of eight years versus traditional lights that need to be replaced every year,” Schultz said. “We know it’s (an) upfront expense and they’re going to last a little longer. And we know LED is a more energy efficient option than traditional lighting.”

Converting to LED holiday lights will cost $90,000 whereas replacing traditional lights annually over an eight-year period costs about $200,000, she said.

It’s not known how much the city would save in energy costs by switching to the new lights, Schultz said.

The white lights stay in place until the middle of March at the request of the Downtown Naperville Allliance, she said.

“They’ve asked the city to do that in the past because it’s a welcoming atmosphere until daylight savings time returns, and it adds ambiance in downtown,” she said.

Naperville is also in the early stages of considering the addition of holiday decor to Ogden Avenue, which would likely take the form of streetlight pole decorations, Schultz said.