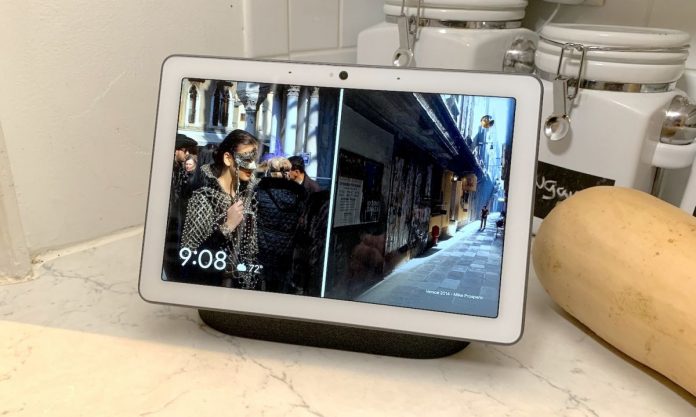 Later to the smart display market than Amazon, Google has taken a half-hearted approach to the category. Until recently, it’s let others take the lead with Google Assistant-powered smart displays. Perhaps frustrated by the fact that only Lenovo, JBL, and LG have done so, Google released the 7-inch Nest Hub last year, and is now following up with the larger Nest Hub Max ($229).

In addition to a larger 10-inch screen, the Nest Hub Max also has a camera that can be used not just to make video calls, but doubles as a security camera. It also comes with a few new tricks, including facial recognition and the ability to track you as you move around the room.

The Nest Hub Max is available online starting September 9 for $229.

The Nest Hub Max looks like a tablet perched on fabric-covered oval stand; it was tempting to try and lift the top portion off its base, which wouldn’t be a bad idea for a future device. At 9.9 x 7.2 x 4 inches, it’s a scaled-up version of the Nest Hub, which has a smaller 7-inch display.

After the bold but polarizing design of the Lenovo Smart Display and JBL’s smart display, the Max’s understated but elegant shape will fit in much better with your home’s decor. It’s certainly a more interesting design than the Amazon Echo Show, which is essentially a large wedge.

In the top center bezel is the Max’s camera; reach to the back side and you’ll find a switch that disables the camera and microphone. Flick it, and a small light to the right of the camera will turn amber, giving you a visual indicator that no one can watch or listen in.

You can purchase the Nest Hub Max in either a gray chalk or charcoal gray finish. Unless you’re looking at its rear constantly, you probably won’t notice the color; only a small portion of the fabric base can be seen from the front.

Just like the Amazon Echo Show, the Nest Hub Max has a 10-inch display with a resolution of 1280 x 800, which looked great. YouTube videos popped, and I appreciated the ambient light sensor, which automatically dimmed and brightened the screen, and even adjusted the colors based on the colors in the room. You can also manually adjust the brightness of the screen.

With two 18mm, 10W tweeters and one 75mm, 30W woofer, the Max can put out a lot of sound for its size. Even at half volume, it easily filled my kitchen with quality audio. There was plenty of booming bass–almost too much at times–but high and midrange vocals were clear and sharp.

Gesture control is a limited but handy feature. If you’re playing music or any other content on the Max, and you’re across the room but need to silence it quickly, you can raise your hand to pause playback. Another hand-raise, and you can resume. For now, this is the only gesture that the Max recognizes, and will only work if you haven’t blocked the camera. It’s a good one to start with, though, and it’s really responsive. It even worked with my 11-month-old daughter’s tiny hand.

One of the advantages Google has over Amazon is that far more people use Google for far more things–such as storing photos, creating calendar invites, and looking up directions. And, once you connect your Google profile to the Nest Hub Max, all of that information is at your fingertips.

And, using the Nest Hub Max’s Face Match technology, all that will appear without you having to do anything. Setting up Face Match was as simple as turning my head side-to-side for a few seconds in the Google Home app. After that, whenever I walked into the kitchen, the Nest Hub Max’s camera would identify me, and greet me with a cherry “Hello” or “Good Morning” on-screen. It would then show me missed messages, and commute times. The one thing that doesn’t change is the background photos. They’re fixed to the account of the person who set up the device.

Face Match, which can be set to recognize up to six people, is an opt-in service, so if you don’t like the idea of your electronics knowing who you are, you don’t have to set it up. Google also said that all of the face-recognition is done only on the device.

If you want to use the Nest Hub Max to make video calls, you’re stuck using Google Duo. (The Amazon Echo gives you the choice of using Alexa or Skype.) Yep, it’s yet another communications app from Google, which your friends and family will have to install on their phones if they want to chat with you.

If you’ve set up Google Duo on the Max with your account, calling it from your own phone is a bit of a pain. You have to open the Google Assistant app on your phone, and then say (or type) “video call [name of your Nest Hub Max].” Google is rectifying this by adding a Call Home Device to your list of contacts in the Google Duo app, as well as in the Google Home app.

The coolest part of the Nest Hub Max’s camera is that its camera, which has a 127-degree field of view, can lock onto a subject, and then digitally pan and zoom to follow them around a room. It’s a feature that was introduced on the Facebook Portal, but I’m glad to see it on a device that’s less creepy.

After setting the Max set up on my kitchen counter, I found the feature really handy when I was chatting with my wife as I prepared dinner. I could move from the refrigerator to the stove, and the camera would dutifully follow me. It’s a little slow, so if you sprint across the room, it takes a second or two to catch up. I also wish it zoomed in a bit more on my face, but for a new technology, I’ll give it some leeway.

However, you can make voice calls to any phone number in the U.S. and UK.

If you’ve connected your YouTube Music, Google Play Music, Pandora, or Spotify account to Google Home, you can stream audio from those sources to the Max. I said “Hey Google, play Bruce Springsteen,” and within a second, I heard the Boss crooning Dancing in the Dark from Spotify.

When it comes to video, the Nest Hub Max can stream YouTube out of the box, as well as HBO Now, CBS All Access, and Starz. However, while I could connect my Netflix account to the Google Home app, when I asked the Net Hub Max to play Stranger Things, it told me it could not stream content from Netflix.

Still, there’s a workaround—for most services. Because the Nest Hub Max has Chromecast built in, you can stream content from those services that support it to the Nest Hub Max. Unfortunately, Netflix is not one of them.

With the Amazon Echo Show, you can watch Prime Video, music videos from Vevo, or live TV and sports with a Hulu subscription.

You can also use the Max’ 6.5-MP camera as a Nest cam; while not as fully featured as Google’s security camera—there’s no night vision, for instance—it can serve in a pinch, in a room where you don’t want to install another camera.

During setup, I encountered an error unique to those who use an iPhone and who already have a Nest Protect smart smoke detector. As part of the setup process, a screen on the Google Home app instructs you to press the Nest Protect’s button to wake it. After, a “Next” icon should appear in the app, letting you proceed to the next step. Due to a coding error, that icon doesn’t show up, preventing you from going any further.

Google is aware of the issue, but could not specify when a fix would be implemented. In the meantime, there are two workarounds: Complete the setup using an Android device, or de-register all your Nest Protects, connect the Max’s camera to Nest, and then re-register your Nest Protects. Once Google fixes this issue, we’ll update this review.

Swipe down from the top of the Nest Hub Max’s display, and, depending on the number of smart lights, thermostats, and other smart home gadgets you have connected to Google Home, you’re greeted with an array of icons that let you control all those devices.

Here, it’s easy to switch lights on or off, dial up the temperature, and even look in on compatible security cameras and video doorbells. Sadly, none of Ring’s devices work with Google.

The Nest Hub Max also supports Thread, a IoT communications protocol for low-power smart home devices. While the Thread group includes companies such as Apple, Amazon, Lutron, LG, and more, there aren’t many products that have Thread; the Nest X Yale smart lock is one of the only devices that use it.

The Echo Show has Zigbee built in, so you can use it as a smart home hub for devices like Philips Hue lights, smart locks, and other smart home gadgets.

At $229, the Nest Hub Max is about $100 more than the Nest Hub, but with that you get a larger display, more powerful speakers, and a camera which enables a host of other features. While I wish you could make video calls using services other than Google Duo, the Nest Hub Max’s motion-tracking and facial recognition features are put to good use, and help separate it from other smart displays. I also appreciated the camera privacy switch, and I imagine others will, too.

It’s taken Google longer than Amazon to come out with a 10-inch smart display, but the Echo Show now has a more than worthy competitor in the Nest Hub Max.