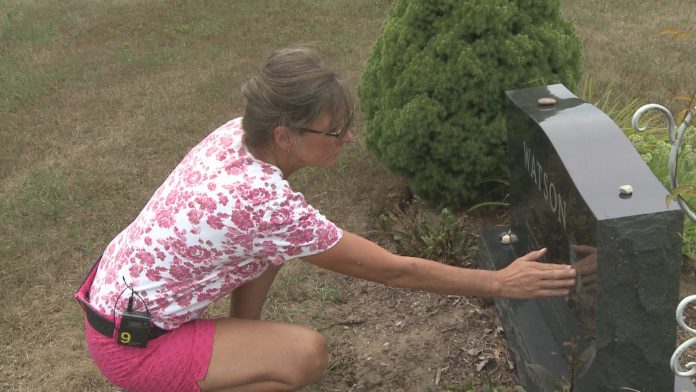 DIMONDALE, Mich. (WILX) – Figurines, toys, even solar lights are just some of the things placed at cemetery headstones to remember a loved one but one Mid-Michigan township is putting an end to that.

Social media was lighting up this week after a mother who lost her son in a tragic car accident is being told that memorabilia at her son’s headstone has got to go.

Deb Watson can explain the pain of having to bury a child.

“He was a very giving soul, we would do anything for anybody,” said Watson.

Her son is laid to rest at Dimondale cemetery.

At just 20-years-old Tyler was killed after being ejected as a passenger in a 2004 crash. A drunk driver was behind the wheel.

It happened at the intersection of Jefferson and Elm streets in Dimondale.

“It’s a nightmare that hasn’t stopped, no parent should ever have to do this,” said Watson.

Since Tyler’s death family and friends have placed different things at his headstone, even landscaped and added solar lights.

“We had put them there so when we drove by to go home, we always knew where he was at,” said Watson. “It just gave you a warm feeling to have that light shining.”

But Windsor Charter Township is cracking down, recently adding solar lights to its existing rules and regulations which were once loosely enforced.

As the cemetery expands, it’s getting in the way for maintenance staff.

Watson had no idea.

“The communication part I think is what’s hurtful, it had us distraught last night with the anniversary (of his death) coming up,” said Watson. “We were trying to get things ready for our get together that we have normally every year on the anniversary.”

Nothing has seemed to ease the pain of saying goodbye.

“You just assume that they’re going to be there and they can go in an instant,” said Watson.

But something as little as a shining light in the dark has helped with getting by.

“It’s just being able to share that in a figurine or whatever, to place it there and make you feel better,” said Watson.

Watson says she’s removed the items from her son’s headstone and is hoping to work with the township on a compromise.

Township Supervisor Marcus Braman would not do an interview with News 10 about this story.

The Windsor Charter Township board’s next meeting is scheduled for August 8.

The agenda hasn’t been posted yet, but the cemetery could come up in public comment.