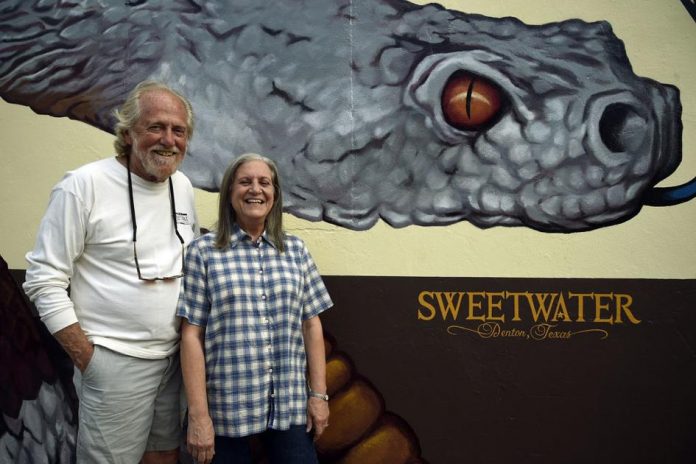 The Merediths, prime rib and live jazz are all coming back to Sweetwater Grill & Tavern.

Floors are being painted and booths are moving back into the space at 115 S. Elm St. in downtown Denton. While no opening date is set, the owners are aiming to open by the end of October.

The partnership bringing back the restaurant consists of Jimmy and Karen Meredith, the original founders and owners; Stephanie Reinke, Karen’s daughter; and her husband, Ron Reinke; and Joey Hawkins, a local restaurant owner.

“We just thought, ‘Wouldn’t it be fun to have Sweetwater again?’” said Stephanie Reinke. “It’s such a great family and community place and there’s nothing like that in Denton. Mom and Jimmy had both retired, but we knew we couldn’t do it without them because they are Sweetwater.”

The Merediths announced their retirement in 2014, and sold the business to Ryann and Rick Reid. The restaurant was rebranded in November 2016 as Agua Dulce Mexican Kitchen, and late this summer the business was sold back to the new Sweetwater cohort.

The team decided to hire a general manager this time around so the day-to-day operations don’t fall on the Merediths. Eric Vellekamp of Dallas Restaurant Group will run the restaurant and is working on new menu items and cocktails.

Old regulars shouldn’t worry, though: Most of the menu is coming back. Since the business launched a new Facebook page in July, it has been flooded with requests, ranging from meatloaf to bread pudding, Karen Meredith said.

Catering will be back too with a new mobile kitchen to bring Sweetwater to all the various festivals and events around town, Jimmy Meredith said.

“That will primarily be my focus once we get the kitchen stabilized and going,” he said. “It’s going to be good to be back in the community.”

Live jazz will once again be a staple at the restaurant on Tuesday and Thursday nights, with the original Sweetwater Jazz Quartet playing monthly.

“We want to give them a home back here, and they’re ready,” Karen Meredith said. “We have such a wealth of jazz musicians in this town, so they’re excited and we are, too. That was kind of me and Jimmy’s social life, coming to listen to jazz.”

Interior renovations are underway, and there’s more work to do on the building’s exterior. New awnings will hang over the side of the restaurant on Walnut Street to cover an extended bar top and seating.

The team is also working to find a way to incorporate green lights outside so the restaurant can “light up” green after University of North Texas athletic wins, like the tower on the university campus.

Inside, the original warm decor is being restored, with more muted wall colors and stained-glass art already hanging on the walls. They’re even restoring old furniture for the space, like the low round wooden table that was once deemed “the lawyer table,” Stephanie Reinke said.

“We’re trying to bring back the things that were most special to the community because that was lost in the transition before, so we’re trying to recapture that,” she said. “It’s what people want, and they’re asking for it.”

The group is hesitating to place an opening date on the project. Jimmy Meredith said he’s made that mistake before, and doesn’t want to work under the pressure of a strict deadline.