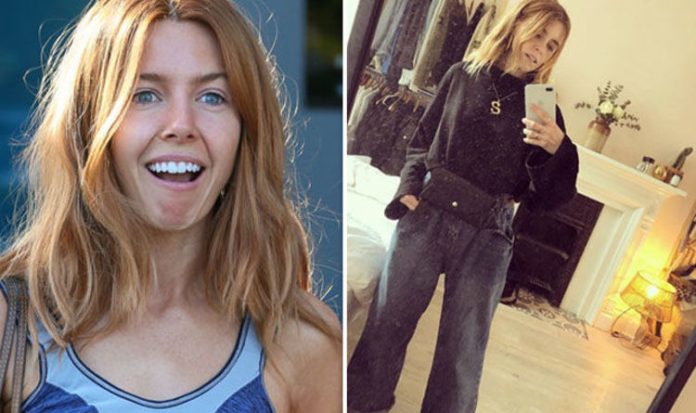 Over the years, the firm favourite has given her fans a chance to admire her inner sanctuary as she’s treated them to a glimpse into her home which she shares with boyfriend Sam Tucknott.

Stacey Dooley, 31, currently has a busy schedule as she not only is perfecting her dancing skills on Strictly Come Dancing, she is out filming documentaries and is currently on a book tour.

No wonder the filmmaker needs somewhere cosy to relax and lay her head after a hectic day.

The TV star showed off her London abode which is kitted out with a monochrome kitchen and chic decor.

The kitchen is open-plan and featured a black and white monochrome theme with a matching kettle and toaster.

The room’s black and white theme is complemented with plain wooden flooring and a shaggy rug.

The kitchen is finished with a white round table topped with a bouquet of purple flowers as the stand out centrepiece.

Stacey has certainly added her own style to her modern home as she maintained a minimalist theme throughout.

The living room sticks to the cool vibe of less is more with a brown leather sofa accessorised with cream leather cushions and a fluffy white rug.

A large bay window takes centre-stage which allows daylight to seep through the room adding brightness to the dark colour scheme.

The Essex beauty has even given a peep into her bedroom which she has kept simple yet consistent with her ongoing scheme.

The bedroom boasts a comfy low bed, a crochet lamp shade and a shaggy rug for her beloved bulldog, Bernie.

The filmmaker regularly poses in her chic fashions and she showed her fans a glimpse of where she keeps her hidden fashion gems.

The trendsetter’s open wardrobe is filled with an array of ensembles which includes her signature white T-shirts and comfy knitwear jumpers.

Stacey recently got herself into a bit of trouble after she and her professional dance partner Kevin Clifton got locked in a dance studio after rehearsals.

The pair trained in a dance studio in Brighton but were obviously unaware of the closing time as it was claimed the pair were too busy perfecting their routine.

After they lost track of the time, the dancing duo attempted to leave and found the doors were locked which forced the pair to climb out through a window.

According to The Mirror, a source revealed: “Kevin and Stacey got locked in because they rehearsed so late.”

“They thought it was funny at first but once they made a few calls to Strictly bosses, the owner of the studios couldn’t be contacted and they were trapped.

“They ended up having to climb and then crawl through a window to make their escape.”

Strictly Come Dancing continues tonight at 6.45pm on BBC One.