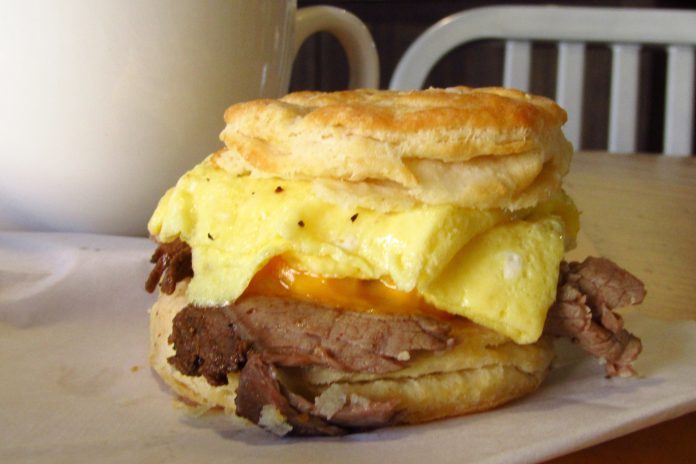 Turning a dive bar into a breakfast spot was no easy task for Seth Rubin, but after the Rustic Tavern closed at 5126 West 29th Avenue at the beginning of 2015, the biscuit maker bought the whole building and rebuilt it as Rise & Shine Biscuit Kitchen, opening at the end of that year. His new project, though, turned out to be considerably easier.

Just thirty days ago, Rubin took possession of the space at 76 South Pennsylvania Street, where Europa Coffee House closed at the end of June, and he’s already welcoming customers to the newest Rise & Shine. The breakfast and lunch cafe will hold its grand opening tomorrow, Wednesday, August 1, serving a variety of biscuit sandwiches and coffee drinks.

Rubin hails from North Carolina, where biscuits are serious business, and he’s been baking them in Denver since 2010, when he launched breakfast service inside two Basil Doc’s pizzeria locations. That lasted five years, giving him plenty of practice for his own restaurant. The Sloan’s Lake Rise & Shine has steadily gained momentum since opening; Rubin has been able to add a liquor license and dinner hours for those looking for beer and sandwiches a little later in the day.

The new location will stick with breakfast and lunch for now, serving Pablo’s coffee and offering a biscuit of the day, just like the original location. Some of those daily specials are made with beer in the recipe, so Rubin is scouting the area for craft breweries so he can keep the beer biscuits local. Of note on the daily menu is the Goldsboro sandwich, made with artisan country ham brought in from North Carolina.

Since Europa had a full kitchen as part of its 2,000 square feet, biscuits are baked on site, so they’re as fresh and fluffy as Rubin’s customers have come to expect. He’ll also soon be adding a Cheerwine soda fountain to go along with the Carolina-blue color scheme inside the cafe. Also part of the decor is a Cheerwine bench on the patio and artworks by Asheville, North Carolina, artist Ceilidh Shaffer (who was also the opening artist as part of the original Rise & Shine’s rotating gallery).

Washington Park West is as much a part of Denver’s building boom as other neighborhoods around the city. A new apartment building is on the rise just across the street, where a second location of Tommy Lee’s Uncle, plus two other restaurants, will soon join Carmine’s on Penn, the Spot and Rise & Shine on the block.

The Washington Park West outpost of Rise & Shine Biscuit Kitchen will be open daily from 7 a.m. to 2 pm. Call 303-722-1024 or visit the cafe’s website for more details, including a biscuit-of-the-day calendar.

Mark Antonation is the Westword Food & Drink Editor. He got his start by eating at and writing about every restaurant on Federal Boulevard and continues to cover the metro area’s diverse international food scene, as well as the city’s quickly changing restaurant landscape.