One of just a handful of “gaijin” chefs in the entire Niigata Prefecture, Josh Nicholls summed up the appeal of his restaurant with three simple words: “I’m an Australian.”

Nicholls is an imposing man – tall with a bit of a belly. He has forearms thicker than the average Japanese woman’s waist and hands like baseball mitts. His tall nose, light-brown hair, and round eyes, along with his Australian palate and imported booze, are a wholly unique dining experience in the city of Niigata.

“Australian food is our theme. But [Japanese people] don’t really know what to expect. They think fish and chips, but I’m serving kangaroos and crocodiles,” Nicholls said. 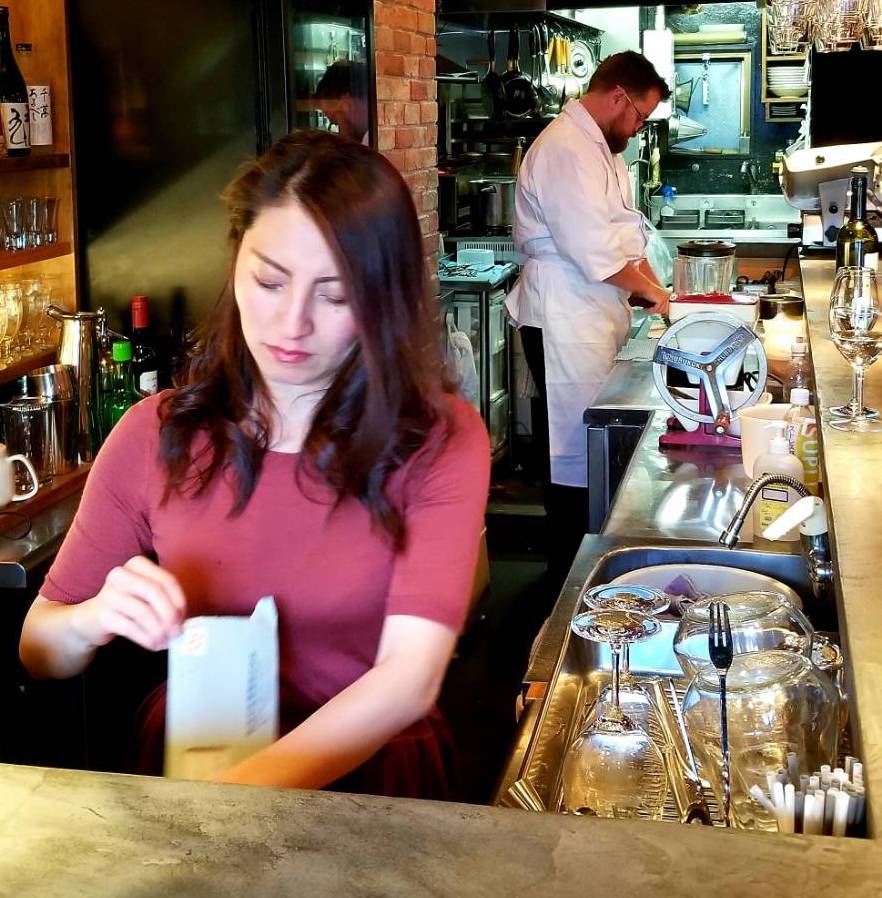 Ai and Josh Nicholls behind the counter Photo: Jennifer Lonergan

Nicholls and his wife, Ai, run the Alchemist, a trendy shoebox restaurant tucked away in the shadow of Niigata Station. The tiny rectangular shop is located down a quiet side street right by the city’s main station. It’s an oasis from the foot-trafficked bus stops, bullet-train gates, and car-pick-ups just two blocks away.

Dishes offered change by the week and sometimes by the day. Plates on offer have recently included: chickpea and eggplant stew, kangaroo prosciutto, spaghetti in pink sauce, and an assortment of homemade jelly doughnuts. There’s also usually a crocodile dish on the menu, along with other animals exotic to the Japanese such as roast turkey and bison.

Nicholls makes everything from scratch without assistant chefs. He often laments how difficult it is to search for help in his kitchen, as he has deemed most up-and-coming culinary students and chefs in the area as completely incompatible with his style of cooking. “They’re training in French and Italian [cooking], but it’s so old. It’s stuff from 20 to 30 years ago.” 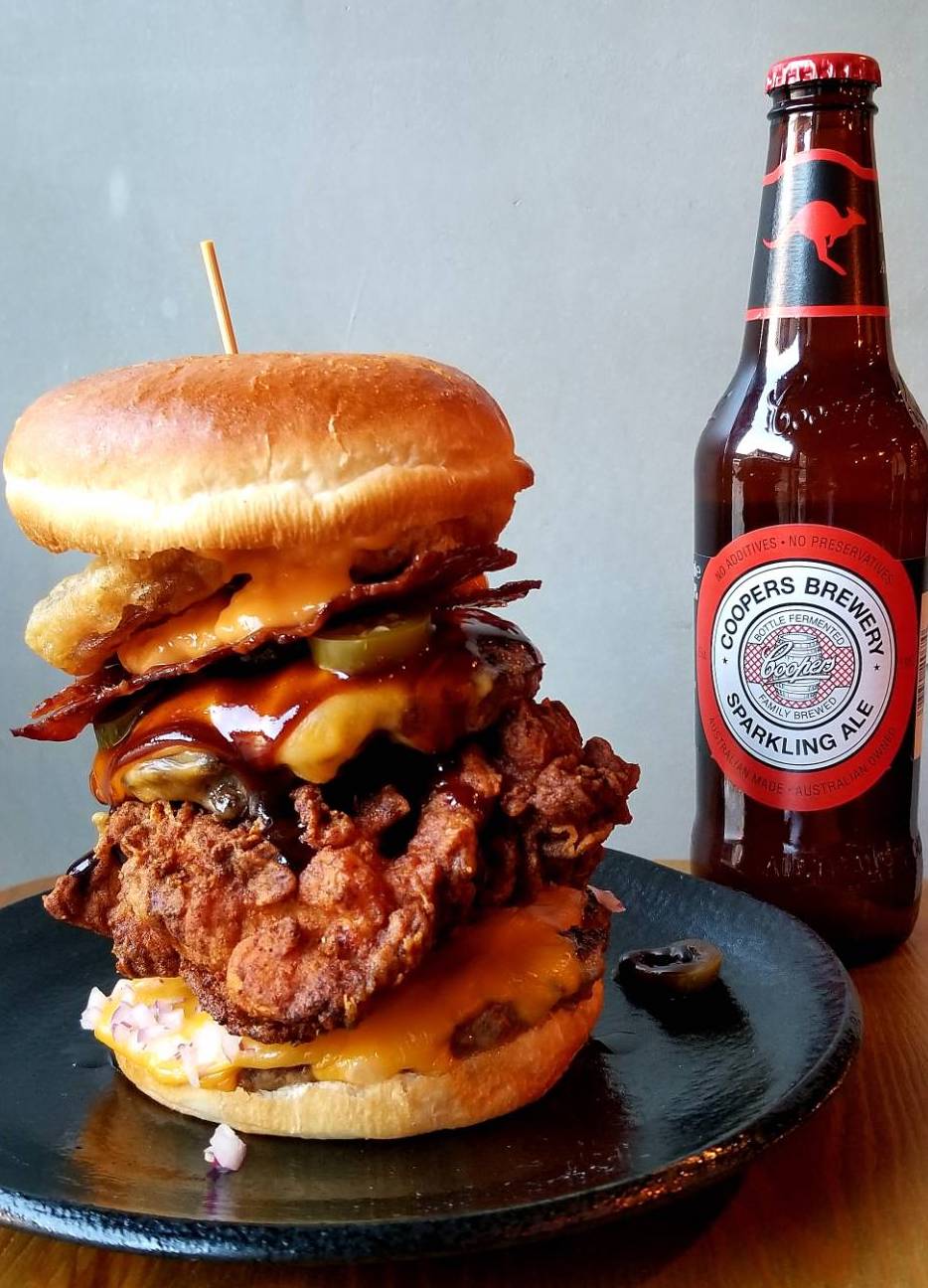 Niigata City has a population just above 800,000, though like the rest of the country, that figure is declining. While it’s no backwoods town, it simply does not have the international community of chefs that are famous in Osaka or Tokyo, the latter of which is renowned for its glut of Michelin-star restaurants.

A second hurdle: chefs wanting to work with Nicholls would also be expected to hit the English textbooks.

Nicholls speaks extremely little Japanese. Still learning the basic syllabary, he forces himself to scan a page or two of his textbook when he can grab a minute. His Japanese statements usually consist of a simple “yes” or “no,” and the occasional three-word observation.

Professionally, he’s learned to work around the gap. But on a personal level, the language barrier can be a source of frustration with his own family. While his wife speaks English almost perfectly, the couple’s two daughters speak little to none.

“It’s difficult to talk to them,” he says. “And they don’t practice English because I’m never home.” 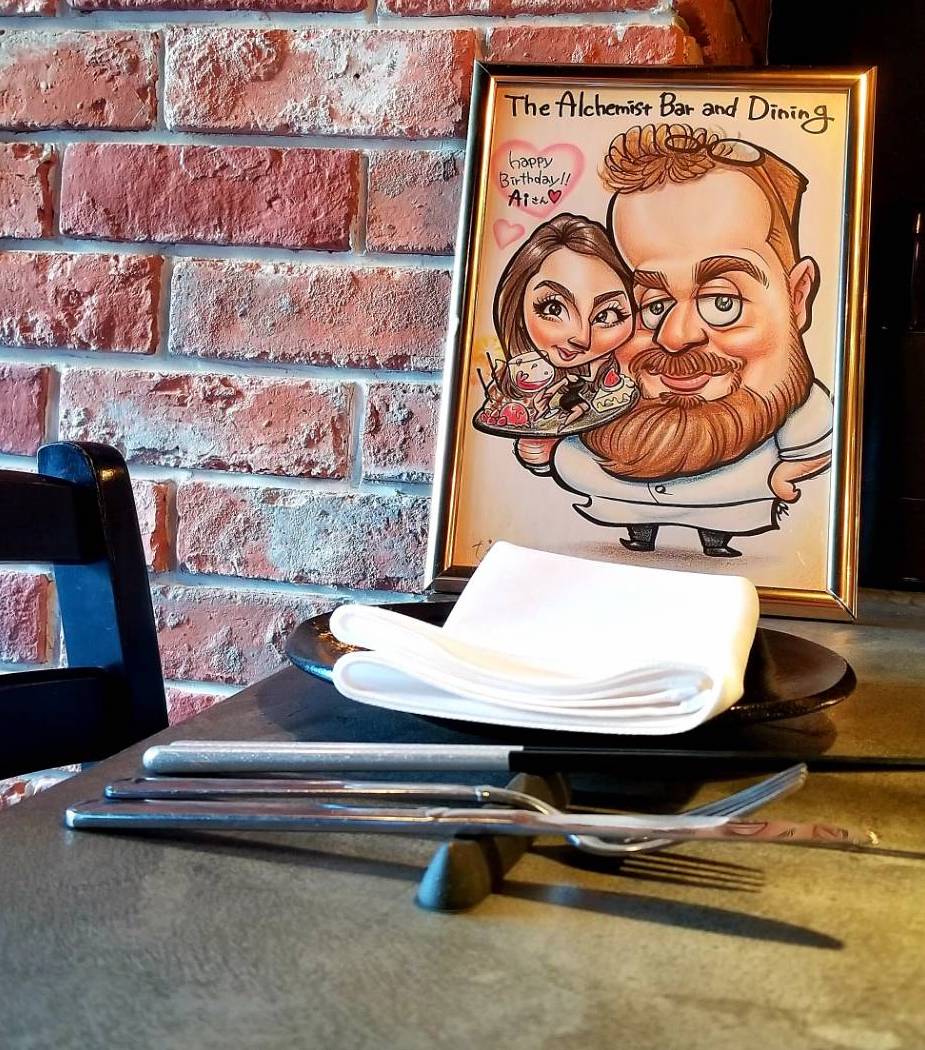 A caricature of Josh and Ai sits near the entrance. The humorous portrait was drawn by a close family friend as a present and has been in the restaurant since. Photo: Jennifer Lonergan

For the most part, Nicholls relies on his wife for translation and communication with customers, ingredient suppliers, family, and his children.

Ai is a tiny, fiery Japanese woman with a penchant for gleeful exclamations and the occasional celebratory dance. She spent the beginning of her life living in the rural farmlands outside of Niigata City. In her teenage years, she moved to the United States, then Australia, where she lived for over a decade and began dating Nicholls after he offered her a ride on his motorcycle.

“She’s a down-home country girl,” Nicholls said about his wife, who does none of the cooking in the restaurant, but all of the cooking at home. “She can feed a family on 600 yen.”

Ai is the face of the Alchemist, chatting with customers and handling representatives from their suppliers and local restaurant organizations. She knows dozens of customers by name, and frequently introduces strangers sitting at the bar to one another if she thinks they’ll get along. Her style of serving and energetic conversations are distinctly unlike a standard Japanese barista.

Kanji Higuchi, 38, is a regular visitor who stops by the restaurant at least once a month. Higuchi is the English-fluent COO of a Niigata company that produces mochi, a popular type of rice cakes eaten year-round. He chats up Ai in Japanese and occasional shoots the breeze with Nicholls in English.

Higuchi believes that the Alchemist’s strict dedication to only serving foreign food also might scare away less adventurous salarymen who are looking for “Japanese soul food.”

“Forty to 50-year-old guys want to eat sashimi,” Higuchi said. “Sashimi is comfortable for them.”

The Alchemist tries to serve only authentic Australian liquors and wines… with the exception of just a bottle or two of sake. Niigata is the world-wide epicenter of sake brewing, and only one Japanese customer has unique permission to buy bottles to keep at the bar. Photo: Jennifer Lonergan

The Alchemist may not be the cheapest restaurant in its area, but Ai prefers to describe the regular customers not by income or profession. They serve an “English-speaking class of people,” as she puts it.

In other words, the Alchemist serves Niigata food fans with the passion and the money to step out from the traditional izakaya and the safe exploration of the familiar Italian and French restaurants – both linguistically and gastronomically.

Tetsuya Watanabe is the only other employee of the Alchemist besides Nicholls and his wife. He stands out in a Japanese crowd with his flamboyant pink hair and cheeky personality. In fact, his bubblegum hair may be the biggest reason he began working at the Alchemist.

“It’s very nice working here because my [hair dye] is okay. In Japanese stores, only black hair is allowed.”

Watanabe was stressed about finding a job because of his eccentric fashion sense until he found a waiting and host position at the Alchemist. The two foreigners never even gave his hair a second thought.

Watanabe speaks only a bit of English. After Ai leaves to put the kids to bed, this language barrier can sometimes make their time working one-on-one rather non-verbal, but both agree it isn’t a major hinderance.

If Nicholls could speak Japanese, though, he said things would be a little easier day to day.

“Western ingredients can be hard to get. If I spoke Japanese, I could ask my suppliers to get exactly what I wanted. I would be able to read labels and product lists. It’d save me a load of time.”

But his cooking is not for some idea of artistic fulfillment. Nor is it a philanthropic endeavor to bring foreign culture to rural areas of Japan. The décor, the cuisine, the culture, and the English community that eats at the Alchemist – Josh and Ai run it all to put food on their own table.

“I do not believe that chefing is an art. It’s a craft,” said Nicholls. “It is a business after all. I’ll never be a famous chef… but I can be a good businessman.”