Home Office The coolest office spaces in the UK: The most inspiring and beautiful... 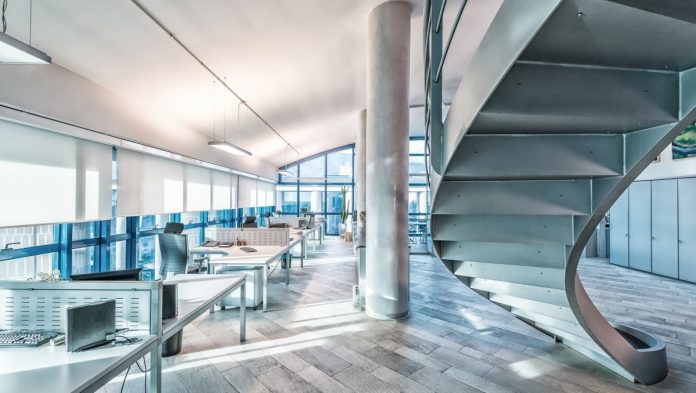 Looking for office redecoration inspiration? Curious what your competitor’s workplaces look like, or simply just want to know what else is out there when looking for a job change? These coolest office spaces in the UK will tick all those boxes.

If you think your current office is cool, and you’re reading this at work, have a look around you. Is there a ping pong table? Adult-sized slide? Free food? No? Then you’re not in one of the coolest offices in the UK.

Tech companies are infamous for bright and cheerful offices full of amenities for staff, making it easier for them to find a comfortable place to work when they need a break from their desk or a carefully designed breakout room to inspire teams. While such ostentatious offices are expected from the likes of tech giants like Google and Shoreditch-based startups, there’s plenty of intriguing interior design to be found across the UK, whether it’s a Silicon Valley brand’s British outpost or a homegrown startup’s headquarters. Here are seven places we’d work, just for the offices alone.

READ NEXT: The best companies to work for in the UK

Let’s just get this one out the way: Google was one of the tech giants that sparked the trend for brightly coloured offices full of games and toys for their employees, infamously including slides.

The style has been aped by plenty of Google-wannabes, but the tech giant’s interior decor preferences have matured. While its various offices across London still look an adult version of a daycare, Google’s newest headquarters is currently being built by Kings Cross station to a design by BIG, the architecture firm headed by famed architect Bjarke Ingels, and Thomas Heatherwick.

The “landscraper”, as it’s been dubbed, is 330m long and ranges from seven to 11 floors. The entire roof has been given over to a garden featuring not only greenery but a running track, handy for staff who want to get a bit of exercise in on their lunch break. For those who prefer different workouts, the building also includes a gym and swimming pool. The behemoth building is costing a reported £1 billion.

As a managed services and consultancy, Mitie may not sound like the sexiest place to work, but it has a view worth paying for — it’s on the 12th floor of the Shard, the Renzo Piano-designed edifice that towers over London Bridge, which tourists shell out £30 for an elevator ride to the top.

Inside, there are quiet spaces with comfy chairs, cozy booths for quick meetings and chats, and a coffee bar, in case that view isn’t enough to perk you up. The offices have been designed to boost employee well-being by encouraging staff to get up and move around, rather than stay sedentary at their desks all day. Plus, staff get a discount card for the Shard’s bars and restaurants — and money off at the viewing platform, too.

READ NEXT: The tech job skills in high demand in 2018

Working for a green energy company must give Ovo staff a nice warm fuzzy feeling on the inside, but the offices are just plain cool. Ovo ticks one box on the startup cliche list by featuring a slide in their Bristol headquarters, but it’s forgivable given it’s one way to exit… the treehouse.

Why book a regular meeting room when your confab could be held in the company’s treehouse, up high on wooden stilts above the lobby, looking out over a miniature forest of trees and more than 500 plants. Afraid of heights? There’s also a meeting room designed like a sky lodge, and another that’s an interior designer’s ode to Brunel, with a studded iron table.

Looking for cool offices in London, you may head east to Shoreditch. But swing west to Paddington and take a peek at Splunk’s headquarters. The big data company’s offices are covered in graffiti — does it count as graffiti if you paid for it? — with fake railway arches as a nod to the local transport heritage, made from bricks and rusted iron.

No-one wants to hang out under a railway arch for a long meeting, so interior designers Morgan Lovell installed an actual, original Pullman Carriage as a breakout room. Offices and other meeting rooms have a mix of doors you’d expect to see on the front of a house, making it all look like a slightly dodgy London street. There’s even a Tardis-style demo room for Dr Who nerds to enjoy.

READ NEXT: The best business podcasts to keep on top of current affairs

Glasgow’s daily deals and events website chucked £1.5 million into renovating listed Cochrane House in the city, and it’s easy to see where the cash went: there’s a pink phonebox for making private calls, a fireman’s pole if you can’t be bothered to wait for a lift, and a tree with fairy lights that glitter whenever a new member signs up to the site. Less thrilling, the giant dome ceiling also reflects the site’s performance, altering colour depending on sales success — let’s hope it doesn’t go angry red when things are slow.

While it’s hard to otherwise explain a hot air balloon over one bank of desks, it’s not all for fun — each area is designed to match deals that the site offers, such as a hotel-style reception, a yoga studio, and a bar.

Mancunian car rentals may not sound exciting, but wait until you see these offices. The car site invested £2.7 million into refurbishing a building in central Manchester, with break-out and meeting rooms featuring auto-friendly themes including James Bond and Back to the Future. Corridors have road markings, there’s games consoles and an open-air cinema for entertainment, and diner-themed staff kitchens — but that’s all fairly to be expected with successful tech companies these days.

More intriguing is the indoor, top-floor beach, complete with umbrellas, beach huts, and swings, as well as pool tables. Perhaps most surprising for a car rental company is the extensive bicycle parking, so staff can cycle to work.

READ NEXT: Is your boss spying on you?

There’s plenty of over-designed office space in Shoreditch, but TransferWise’s London base has some appealing features that are above and beyond comfy chairs and game-filled breakout rooms. First, there’s the sauna, handy for warming up after a rainy London commute. Then there’s the airborne chillout pods, tent-cum-hammock chairs dangling from the roof — surely perfect for a mid-afternoon nap. And there’s a rooftop terrace with fairy lights, convenient for lunch in the sun, when available.

There’s also a ping pong table, as well as plenty of comfortably furnished breakout rooms and meeting places, including an ironic nod to the local area with one room dubbed the “hipster cafe”.