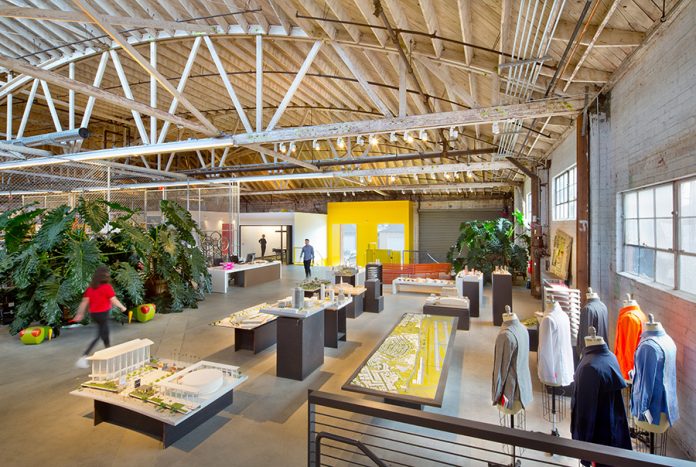 When it moved to Crenshaw last summer, Rios Clementi Hale Studios (RCHS) was one of the few large design practices to join a smattering of smaller businesses migrating to the South Los Angeles area. The recent relocation by the self-described “transdisciplinary” design firm is one that aims to “make ourselves accessible,” says Mark Motonaga, one of its creative directors.

For RCHS, which gained renown for its whimsical design for Grand Park in downtown L.A. in 2012 and the Hollywood Bowl artists’ lounge in 2014, the move was a practical one. The firm had grown too big for its 13,000-square-foot office, which had to accommodate studios for fashion, interior design, café ware, graphic design, landscape, and branding, in addition to architecture and urban design.

As designers whose portfolio has markedly improved public space throughout Los Angeles (the Red Line subway stop at Hollywood and Vine, Silverlake’s Sunset Triangle Plaza, downtown’s Grand Park, Glendale’s Chess Park), RCHS was conscious of the implications of its new location for concerns about gentrification. The firm had picked a site for its office in the Crenshaw Creative Corridor, which runs through a number of older neighborhoods, among them the predominantly African-American Leimert Park. This stretch of Crenshaw—home to soul food restaurants, taco stands, and the headquarters of the Los Angeles Sentinel, an African-American-owned weekly newspaper—was rapidly changing.

In Crenshaw, within sight of the new Expo/Crenshaw light-rail station, RCHS decided on a nondescript brick-walled warehouse that could accommodate its swelling practice. Proximity to the station was also in line with the firm’s urban-minded mission: “We were actively trying to move near the Expo Line partially because it’s so exciting to watch Los Angeles transform,” explains Jessamyn Davis, a creative director and COO at RCHS. “We bought Metro tap cards for everyone in our office.”

The firm had two priorities for the move: maintaining a sensitivity to local residents and creating flexible workspaces for the expanding practice. The building’s sprawling 33,000-square-foot interior, flooded with indirect sunlight, now provides a welcoming space for both design work and neighborhood events. “The biggest design move was relocating most of the electrical and HVAC so that it was unobtrusive,” says RCHS creative director Sebastian Salvadó. “Usually people moving into bowstring-truss spaces fill them with a spaghetti of mechanical systems. We wanted to express the beauty of that old structure.”

That decision also allowed for a truly free plan that can adjust to support growing teams and allow constant reconfiguration as workloads travel throughout disciplines. Flexibility and responsiveness are not novel ideas in office design, of course, but RCHS means it; the space has already changed layout three times in the past 12 months. This periodic rejiggering has largely eliminated the hierarchy of spaces, resulting in a more democratic environment.

The expansive interior means that the studio can produce 1:1 prototypes for clients, hold events and exhibitions, and accommodate the essentials, like print and fabrication areas. Courtesy Rios Clementi Hale Studios

That is not to say the space lacks articulation or much-needed privacy. The protean office is equipped with a materials library; bike-share and private conference rooms; recording, photography, and sewing studios; and a fabrication shop. Despite the constant activity, the naturally lit space is imbued with laid-back serenity—until the electric Expo Line trains, just yards from some workstations, whoosh past.

From the start, RCHS intended the new space to function as a venue for the Crenshaw community. The goal was to “open ourselves up and provide Leimert Park and some of its local organizations use of our office as meeting spaces,” says Motonaga. Since opening last summer, the office has hosted outreach sessions for local artists working on pieces for the in-progress Crenshaw Line, participated in the ACE Mentor Program for high school students, and hosted open-door creative design programming for neighborhood children.

So far, the firm’s community outreach efforts are a promising counterpoint to countless examples of gentrification across the country by well-meaning creatives, getting Angelenos from both sides of the I-10 freeway to mingle. It’s a start as newcomers flock to the burgeoning Crenshaw Creative Corridor. RCHS cofounder Mark Rios asserts, “The most important project is always designing ourselves, refining our culture, and evolving our process.”