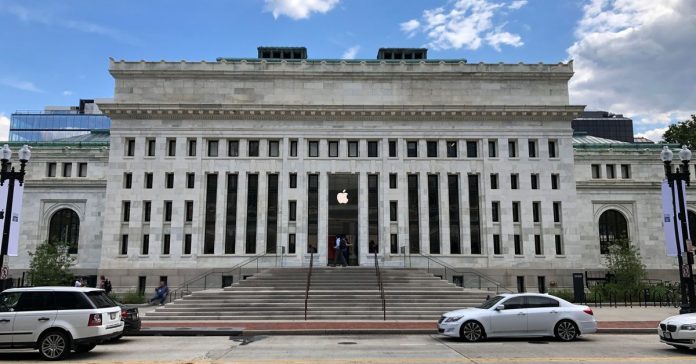 The historic 1903 building has been impressively refurbished. Underused since 2004, when the short-lived City Museum of Washington closed there, the building now gleams. The Vermont marble exterior has been cleaned and restored, while the northern stairs—originally added in the 1980s—have been rebuilt to meet modern accessibility requirements.

Apple reportedly invested more than $30 million in the overhaul and is renting the space from the city for $700,000 a year under a 10-year lease. The aesthetic is a bit of a mash-up between the neoclassical forms popularized by Daniel Burnham’s World’s Columbian Exposition in 1893 and a Design Within Reach outlet.

At heart, though, the stately library has been radically transformed into a temple to commerce, a compromise between the desire to preserve a distinguished public space and the fiscal realities of adaptive-reuse projects involving century-plus-old structures that have major maintenance needs.

Inside, the building’s white walls and marble floors are bright almost to the point of distraction. Apple’s signature light-toned wood finishes appear throughout the store, from the iPad displays to the ficus tree-lined “Genius Grove”—supposedly a less-stressful version of the Cupertino, California-based corporation’s traditional Genius Bar setup.

The grove is located where the library’s book stacks once stood. Where the circulation desk once was now are seating cubes in a central event space, brightened by uncovered skylights that were hidden during the City Museum conversion. Apple’s wares are featured prominently in the Carnegie’s east and west wings, formerly reading rooms.

There’s no question what the space is about: selling Apple. Apple products, Apple employees (some dubbed “creative pros”), and the glossy Apple aesthetic that has cropped up across the world since the first Apple stores opened in 2001, under Steve Jobs. The building has been turned into a branding experience, cementing the company’s presence in the nation’s capital and ranking among the most notable of the more than 500 Apple retail outlets globally.

Given the Carnegie’s origins and history, this can make for a jarring walk-through. Steel baron Andrew Carnegie funded the library as part of his philanthropic library-building spree at the turn of the 20th century. It served as the city’s main library until 1971, before the dedication of the Martin Luther King Jr. Memorial Library, and subsequently hosted University of the District of Columbia space through the 1980s. (UDC sunk $4.2 million into a renovation that, among other changes, removed the book stacks and added the north stairs, plus an HVAC unit.)

Since 1999, the building has served as the headquarters of the Historical Society of Washington, which is now calling its location the “DC History Center.”

The building itself is an “excellent example of the neoclassicism in vogue at the beginning of the 20th century,” according to its nomination to the National Register of Historic Places in 1969. (It was also designated a local landmark in 1964.) Former New York-based design firm Ackerman & Ross designed the building and was known for numerous Carnegie Libraries across the U.S.

The library fell into disrepair after the City Museum closed. Numerous proposals were floated to reopen it, including a tourist center and a new home for the Spy Museum, but none worked out. In 2016, the Historical Society was forced out due to mold in the building and temporarily set up shop at the Newseum (also currently slated for redevelopment).

Apple stepped in late that year. The company reached an agreement with Events DC, the city’s sports and conventions authority that manages the Carnegie Library, to rehabilitate the building; in exchange, the city would allow Apple to open a retail location there. Apple had earlier been in talks to open a downtown location at CityCenterDC, the high-end development just a few blocks southwest of the library, but a deal did not materialize.

In this way, one of the District’s most treasured, if long undermaintained, public spaces begins a new chapter as a significantly privatized one. A prized civic building has reopened, no longer smelling like mold.

But at present, it is difficult to imagine how the flagship store will consistently serve as a “third place” for discovery and community engagement in the long term. Will the city’s creative class really flock to the building to work on special projects or read books and relax, as they might at neighborhood coffee shops? Or at public libraries for that matter?

Apple and London-based architecture firm Foster + Partners, which designed the store as well as a comparable Apple outlet on Paris’s Champs-Élysées avenue, hope so. The tech company is putting on a six-week “StoryMaker Festival” at the Carnegie, with events led by local artists.

The Historical Society also continues to operate from the building, with office and gallery space upstairs and a photo gallery of the library’s history in the basement. But the wayfinding icons to the history center are small and out-of-the-way, whereas Apple’s logos are large and prominent.

Approach the building from the south and you will see the original inscription “A University For The People” emblazoned across the marble benches flanking the entryway. Look a little higher, however, and the immediately recognizable Apple logo brackets the doors in two marble panels.