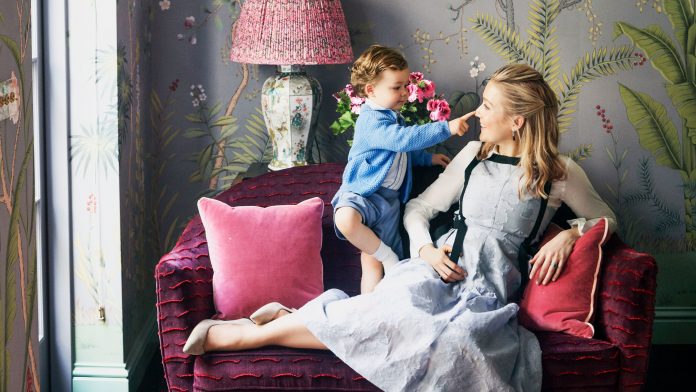 The transformative power of decor has never been lost on Hannah Cecil Gurney. As the daughter of de Gournay founder Claud Cecil Gurney, she grew up immersed in a world of glorious hand-painted wall­paper. But never was this fact more apparent than when her three-year-old son, George, uttered his first word: “Turtle.” It is no coincidence that his crib is floating in a virtual aquarium of de Gournay sea creatures, with a tortoise swimming directly above. “We’d always say, ‘Hello, Mr. Turtle!’” Gurney shares with motherly pride. “As he’s gotten older, it’s kept so much charm for him.”

When the director of global marketing and development for de Gournay and her husband, Eddie Harden—he owns and manages Nanhoron, a Welsh estate where his family has lived for some 700 years—purchased their house in London’s Battersea neighborhood four years ago, they were newly married and not yet expecting. “We were coming from a small flat to this big house,” she says, “and the second we moved in, it was this bizarre feeling of having all these rooms to fill.” Ironically, having just welcomed twins Oscar and Scarlet, “I look at the house now and I’m like, ‘It’s too small. Maybe we should move to the country.’”

Situated near Battersea Park, the Victorian residence possessed respectable bones but had fallen victim to a “weird modern renovation,” as Gurney puts it. “I could see what an amazing shell it was. My husband said, ‘Why would you want this when we can get one that’s already beautifully done up?’ But then you’re moving into someone else’s house,” she remarks pointedly. She convinced him of the potential and spent the next couple of years bringing it back to how it had once been—
with period-appropriate cornices, joinery, and sash windows. “Because I was so busy with work and travel, it meant that by the time I got around to decorating, we’d lived here long enough that I had a much better understanding of how I wanted it to be set up for our family.” That being said, the renovation was so intensive, she quips, “I learned that I’d no longer like to be an interior decorator.”

Not surprisingly, Gurney designed almost every room from the walls in. “All relatively new designs,” she says. “For me, it’s fun to use wallpapers that people haven’t seen so much.” (Coveted for its couture artisanship, de Gournay is highly sought after among top designers and tastemakers, who wait months for each paper to be rendered by hand.) A luminous coral chinoiserie wraps the master bedroom, where the curtains have flirty scalloped edges. For the couple’s bath, she chose a paper of pink flamingos to which she added an ombré yellow effect at the top, even lining the shower in it. “I was quoted some crazy price for marble, and I remember my dad saying, ‘That’s ridiculous. Just put wallpaper inside, glaze it, and install a glass shower on top.’ It makes the room feel much bigger because the shower kind of becomes invisible.” The living room features a chocolate-brown chinoiserie on matte rice paper evocative of the Coromandel screens in Coco Chanel’s Paris apartment. “I’ve always loved that paper, and I’ve seen lots of people gravitate toward it, then be afraid to use it, so I decided, ‘I’m going to put it up and show how easy it is to use a color like chocolate brown.’”

The only room in the house that wasn’t purposefully designed around the wallpaper is the den, or “snug,” as Gurney refers to it. “I’d always wanted to do a dark-red library, so I started with the joinery and everything else came after.” De Gournay had recently established a hand-embroidering studio in Calcutta, where Gurney’s father has a home, and she decided this would be an opportune place to showcase the craft, choosing one of de Gournay’s Alessandra Branca designs in a custom colorway of teal, scarlet, and saffron.

By the time Gurney got to the second children’s room, she’d gone through pretty much every color of the rainbow. So a grisaille African landscape is instead surrounded with pops of primary accents: cobalt curtains trimmed with tomato-red pom-poms, canary-yellow framing, and a graphic black-and-white carpet. Then there’s the children’s bathroom, outfitted in a completely bespoke wallpaper inspired by Hyde Park and the Carlyle hotel’s legendary Bemelmans Bar. It features whimsical scenes such as squirrels skipping rope, foxes playing soccer, and mice pushing ice-cream carts. “It’s completely adorable,” Gurney coos. “I didn’t think George would be particularly interested in it, but the day it went up he came home from school and said, ‘Mummy! Mummy! Come check out my wallpaper! I was like, ‘That’s what it’s all about!’ It’s so lovely seeing how enthralling it can be for a child. Every time he has a bath, he wants to role-play with the characters and makes me give him ice cream from the cart.” She continues with a chuckle, “So maybe he’s going to work for de Gourney one day and not drive tractors.” 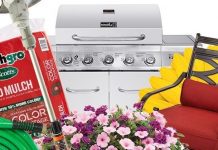 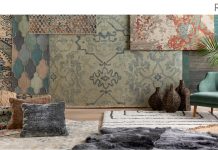 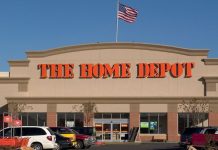