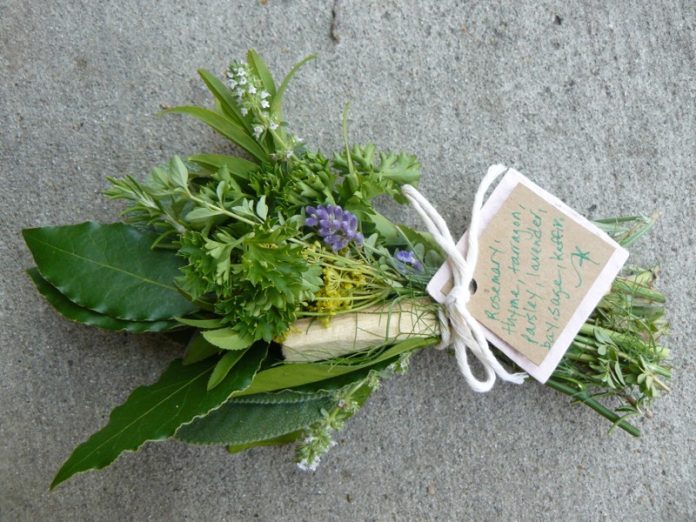 Herbs can be tasty, such as basil tossed into pasta salad or rosemary added to roasted potatoes. However, gardeners with extra herbs in their plant beds can get creative, making “herb bouquets,” which can look lovely, smell good and be used later to add a dash of flavor when cooking.

Julie Lynn, of Central Austin, is a longtime crafter who recently made some herb bouquets for the first time to give to friends at a brunch. She got the idea based on the classic French “bouquet garni,” which “refers to sprigs of herbs, usually parsley and thyme, and bay leaves tied together for steeping or simmering in liquid to flavor it,” according to finecooking.com.

For such bouquet garni, “You make little bundles of herbs, and you tie it with strings and you toss it in your soups, stocks, et cetera, for flavoring,” Lynn says.

Other materials included palo santo sticks (“a fragrant piece of wood”), kitchen string and pieces of seeded paper and Kraft paper to make cards or tags, she said. (Cinnamon stick or licorice root could be used in place of the palo santo stick.) Lynn says the sticks can be purchased online or at retail stores; they each should be roughly 4 to 5 inches long.

She cut the herbs the same morning as the brunch, for freshness. “It’s going to be more aromatic with fresh herbs,” she says.

To begin putting them together, she started with the stiffer herbs, such as bay leaves, to have a firmer base.

Then, she says, “it’s just a matter of building your bouquet.”

From there, with the larger leaves toward the back, “I just pick and choose and add and take away as I build,” she says, using one or two sprigs — roughly 8 inches long — of each herb. Then, she adds the wispier herbs, such as fennel, at the front.

Intending to make 10 bouquets, she planned to use all nine herbs and the wood stick in each one.

Though fragrant, the stick is “more for a decorative touch,” she says.

“Once I’m pleased with how the bundle looks, then I’ll tie it,” she says. She cuts about 18 inches of string for each, though likely some will get cut off.

“It’s better to have more,” she says.

She ties the string once around the herb bunch, then threads a hole-punched card through the string. (On her cards, she identifies the herbs used.) Then she makes a final bow and cuts off any extra string, she says, but you could leave it, she says.

Each one is different, and the scent is a unique “blend of aromatics,” she says. In all, it took about a half-hour to collect the herbs, and once all the materials are ready it takes about five to 10 minutes apiece to assemble, she says.

Once finished, the herb bouquets can used for decorating (even in a small vase with water) or cooking.

“You can tear off bits and pieces to cook with,” she said. “You can also hang it upside down to dry to use for decoration.”

She encourages others to try making them. “It’s so easy,” she said. “Anybody could do it.”