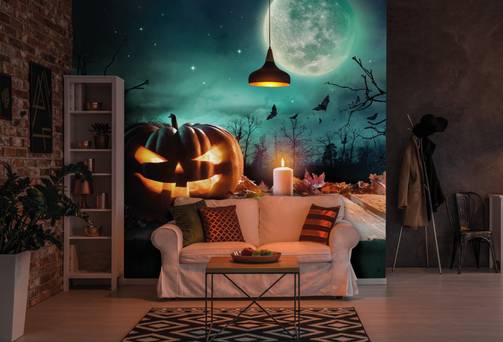 ‘It’s like a war zone in here,” says the girl at the Lidl checkout, wearily scanning my vegetables. “People have been fighting about pumpkins all day.” My pumpkin of choice is medium-sized and Irish. It costs €2.99. Irregular in shape and duller in colour than the larger pumpkins, I feel that it has the makings of a characterful decoration. The shop also has a stack of large, round, bright orange pumpkins. These, I assume, are being sold by weight as the pricing isn’t obvious. Hence the pumpkin wars. They’re heavier than you think.

Pumpkins aren’t native to Ireland and apparently they’re tricky to grow, but over the last decade, they’ve become a Halloween staple. I have to admit that I’m a fan. What other piece of interior décor can also be made into soup? “You don’t even have to carve them!” says Jo Linehan. “You can buy a big pile of them in different shapes and sizes and use them just as they are.” She’s one half of Gaff Interiors – the other half is Caroline Foran – and their collective approach to Halloween décor is to interpret it in a way that’s chic and not that obvious.

Linehan lives with housemates, 30-somethings who probably wouldn’t appreciate sticky spider-webs and giant inflatable skeletons with pumpkin-heads (if you must, you can buy these in Lidl for €29.99). Instead, she’s exploring the more mature side of Halloween decoration. “After the last storm I gathered some twigs and branches, so I’m going to display them in a big vase, but that’s as far as I can go towards spooky,” she says. “Apart from that, I’m going to focus on light. We need it, at this time of year, so I’m going to use lots of candles and fairy lights.” And a pumpkin. Always a pumpkin.

For lighting, Linehan recommends Ikea as economical and eco-friendly, but also likes Søstrene Grene. The Danish brand has stores in Limerick, Athlone, Cork and one, recently opened, on South Great George’s Street in Dublin. It’s a good source of affordable Scandi-style homeware and DIY craft materials which are the direct opposite of Halloween tat. “Søstrene Grene has great faux foliage too. You could totally get yourself decked out,” says Linehan. “I like any celebration where you get to be creative and it’s the make-and-do aspect of Halloween that brings the most joy.”

On Halloween night, Linehan plans to stay in and watch a scary movie. Her business partner, Caroline Foran, has her own house where she expects to be kept busy answering the door to trick-or-treaters. “There are a lot of kids on her estate so she’ll definitely do something with door decoration,” Linehan says. “She loves her living room too, so she’ll probably switch around the cushions and put in some orange touches.” A brown faux fur throw, a glowing orange lampshade, or even a bunch of seasonal flowers can give a room a subtle Halloween flavour.

That said, Linehan admits that some households, especially those with children, prefer a more traditional take on Halloween. “It can get tacky, but the definition of what is and what isn’t tacky varies from person-to-person. For some people, if you don’t have the fake tombstones in the garden then you’re not celebrating at all,” she says. “The big thing is not to go too expensive. People get carried away with big displays. So keep it cheap and cheerful for sure. It’s only a few days, and nobody has room in their house to be storing giant ghosts and goblins for the rest of the year.”

For Halloween decorations that aren’t run of the mill, she suggests TK Maxx. There’s always an element of smash-and-grab. You never know quite what to expect and you can’t plan in advance, but that can be fun if you’re on form for it. Expect a strong Mexican Day of the Dead theme running through the Halloween offering. Extreme manifestations of this trend include the Queebo Mexico skull stool or side table. It’s 54cm high, made in polyethylene, and inspired by Mexican sugar skulls. Sheer madness, of course, but kind of cool. It’s available online from Smithers of Stamford or Amara, where it costs a frightening €1,210.

Meanwhile, fashion and interiors blogger Anne Marie Boyhan, is planning a Halloween that her three-year-old daughter will enjoy. “The whole thing of decorating the house has really taken off,” she says. “People are gearing up to Halloween like it’s Christmas! A lot of the decor is cheaper when you order it from sites like AliExpress and some parents start their online shopping for Halloween in the middle of August.” This year, instead of buying decorations, Boyhan is planning a visit to a pumpkin patch in Co Meath. This is one of several such places around Ireland where you can pick your own pumpkin from the field. “It’s a great family photo opportunity,” she says. “All that orange! Sometimes they will carve the pumpkin for you, but we’ll bring ours home and make an occasion out of carving it. Halloween is all about the pumpkins!”

When they get home, Boyhan and her daughter are looking forward to a “Pimp my Pumpkin” session, with spray paint, glitter, stickers and pearls. “I’m going to up my pumpkin game!” she says. “We’ll be using faux pumpkins as well as real ones. I like to have them around the front door, some of them as lanterns, and a tablescape on the kitchen island with pumpkins of different sizes decorated in different ways.” The orange look, she admits, is not for everyone. While families with children tend to favour a black-and-orange palette with plenty of scary stuff, she’s also noticed a Instagram trend for white pumpkins decorated with metallics. Real white pumpkins may be hard to find, but faux ones are widely available. You can buy a small one in Woodies for €5.79 along with spooky stuff that ranges from the tasteful to the gruesome. Severed hand decoration, anyone? It’s life-size, lifelike, and comes packaged like a prime cut of meat. Halloween can be tasteful, but it doesn’t have to be.