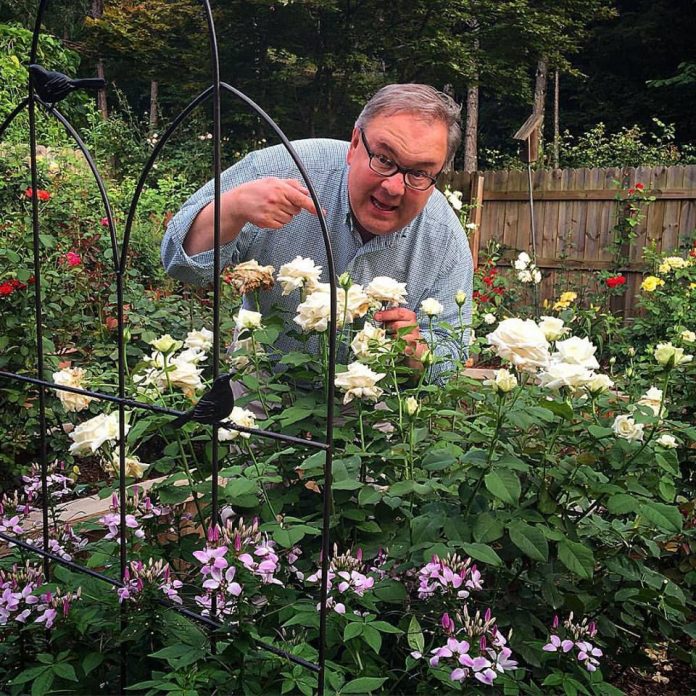 Chris VanCleave doesn’t wear rose-colored glasses. But his vision of the world is definitely rose-tinted.

The first time he can recall noticing roses was when he was about six years old. Growing up in a “great big Southern family” in Tennessee, each year on the second Sunday in May – Mother’s Day – he would accompany his mother and grandmother to the family cemetery in Lawrence County.

They would go to the cemetery early, decorate the headstones with flowers and then go to his mother’s childhood church in the country for dinner on the grounds. He would swim in the creek in which she was baptized.

But what he remembers most vividly were the corsages worn by the ladies in his family, who were dressed in their Sunday finest. The flowers conveyed an unspoken code, he says: If your mother was deceased, you wore a rose.

He understood then that “flowers tell a story,” he says. “They’re the language of love.”

His grandmother on his mother’s side had lived the hard life of a farmer. But the pink roses pinned to her chest transformed her. She was never more beautiful, he says.

“It made an impression on me that roses are important,” he says. “They meant something – a badge of honor that (the ladies) were proud of.”

Roses are deeply ingrained in his very being – his history, his spirituality, his home, his family and friends. Gardening has become more than a hobby for Chris. It’s now a way of life.

His love and passion for growing things took root as a child growing up in Nashville, where his mother grew roses, and his father grew vegetables. Today, just like his dad did, Chris rises early to tend to his roses – some 185 shrubs – which are “packed” in the average-size yard of his home in the Birmingham suburb of Helena.

His favorite rose, he likes to say, is “the one I’m looking at.”

He has become known as “the Redneck Rosarian,” the name for the popular blog he started in 2007. He had always kept a gardening journal, he says, but the blog enables him to educate others about growing roses. Along with Teresa Byington, he also co-hosts a podcast, Rose Chat, now in its fifth season. And he travels around the country speaking to groups about his hobby.

“People are hungry for information,” he says. “They want good, solid information they can take into their garden.”

It might surprise some fans to learn that he has a day job, too, which is what brought him and his wife, Tina, and their two children to Birmingham in 2000. He is in his 26th year working in the operations division at Regions Bank.

In addition to the blooms he often brings from his garden to the office, Chris brings lessons from the garden, too, he says: lessons like the inevitability of change, and the fact that things live, die, grow and need to be cut back. He finds a strong connection between gardening and life and faith.

When he was 12 years old, Chris’s father died in a car accident. Early the following spring, Chris found his mother, who “always had roses,” out in her garden, “shearing everything to the ground.” Grieving the loss of her husband, she took out her frustration on her rose bushes.

Though he might have felt confused at the time about why his mother seemed to be destroying the roses that had given her so much joy, he soon understood the importance of what she was doing.

“Honey, you’ve got to cut away the dead, damaged and diseased to see new growth,” she explained. Pruning her roses was therapeutic for her.

“To me, that’s the beauty of the garden,” Chris says. “As we cultivate the soil, it speaks to us. The garden is a part of who we are.”

Each rose “has a story to tell,” he says – like the beautiful, tough Peggy Martin rose, sometimes known as the Hurricane Katrina rose. After the hurricane, Louisiana gardener Peggy Martin returned to her home to find that the only thing still living after being under water for two weeks was her then-unnamed rose.

“Those types of stories bring the garden to life,” he says. “I love the folklore.”

Chris can be found in his garden for an hour or so every morning, with his pruners and his camera in hand. Then he spends another hour in the evening tending to his roses – or just sitting in the middle of the garden to take in the fruits of his labor: the visual feast of colors and the flowers’ heady fragrances.

“I walk out into my garden and everything else fades away,” he says.

A couple of times a year, he and his wife invite the public to tour their garden, which features some 85 to 100 types of roses. The last time they opened, about 250 people attended.

Of course, he enjoys when his garden is admired and appreciated, but he also hopes to inspire others to grow their own roses. “If you visit my garden and you plant one rose bush, I did my job,” he says.

The Redneck Rosarian, which is a tongue-in-cheek name Chris gave to his blog to stress that anyone can grow and love roses, exists to spread free information. The biggest misconception, he says, is that roses are difficult to grow. He insists that “if you can dig a hole, you can grow a rose.”

Chris encourages anyone who’s interested in roses to seek out one of the 300 rose societies in the United States. “You can Google all day long,” he says, “but if you get the Milwaukee website, the instructions will be vastly different from those in Birmingham.”

He’s known as “America’s favorite rose gardener,” but he shrugs off the description. “I just dig,” he says. Still, he admits that “it’s amazing what can happen when you dig.” Not only has he created an awe-inspiring landscape; he’s also created a line of gardening tools for a fifth-generation company in The Netherlands.

Three years ago, representatives of DeWit Garden Tools contacted him and met with him in Birmingham at Jim ‘n Nick’s Barbecue, where he sketched out some ideas for garden tools on a napkin. DeWit now manufactures his Redneck Rosarian tools, which are sold on Amazon and in some independent garden centers.

“How Alabama is that?” he asks.

In Chris’s garden, the roses are usually finished by the end of October. At the end of February, he is out there pruning, planting and “getting rolling again for the next season,” he says. He is “constantly making edits” in the garden, adding and subtracting shrubs.

“Gardeners live on the hope of next year,” he says. There’s another life lesson: the promise of tomorrow.

As for Decoration Day, that’s become a thing of the past for Chris. But he misses it still. “It’s not a family gathering like it used to be,” he says, “but I still take flowers.”

For more information about Chris VanCleave and the Redneck Rosarian, visit www.redneckrosarian, and follow him on Facebook.