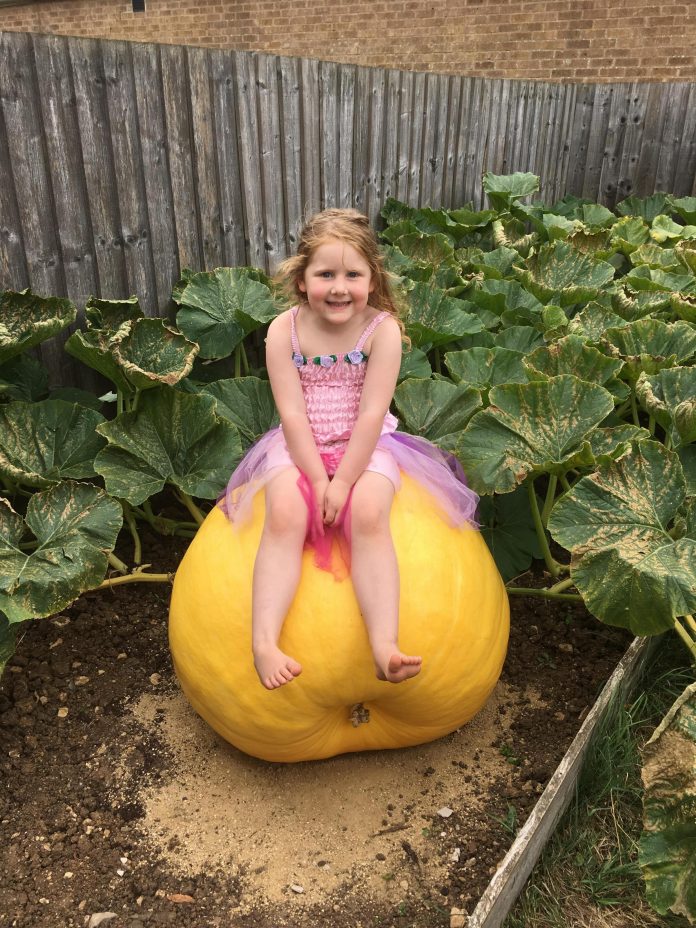 WITH still more than two months to go until Halloween a giant pumpkin has already reached monstrous proportions in an Oxfordshire garden.

The 26-stone behemoth was planted by the Howard family at their Charlbury home four months ago and is now large and sturdy enough to sit on – with no signs its stopped growing.

Viki Howard said: “We decided to start growing our own pumpkin when our daughter was born, she’s now three and each year we’ve gone bigger until this time my husband Matt got a giant pumpkin seed sent over from America.

“He is really the one in charge, with lots of help watering from the children. I just watch in awe as it continues to grow.”

The 28-year-old said the couple and their two children, Chloe, three, and one-year-old Noah, had tended the vegetable inside before transferring it to the garden in the summer.

She added: “Within four weeks of it being planted outside it was already the size of a normal supermarket pumpkin and it seemed every day we’d go out and it would be even bigger.

“We had a bet at the start about how big it would get and Matt said 12-stone which I initially laughed at.”

The mother-of-two said the family were not naturally green-fingered, excluding some previous forays into planting chillis, but her husband had become invested in helping the gourd reach its full potential.

She explained: “He’s always online looking up tips on how to care for it. I keep telling him to use the hose to water it as it needs a massive amount of water but he insists on still using a watering can to make sure all the leaves are fully watered.”

For the children the pumpkin is proving a magical addition.

Ms Howard explained: “Chloe keeps saying its the pumpkin from Cinderella and it is going to become a carriage.

“It’s fantastic when the kids have play dates as well, it must seem even bigger to all the children.”

The super-sized squash is expected to continue growing for another four weeks before it reaches its full size.

In October it will be carved with a spooky design and serve as a spectacular Halloween decoration in the garden.

Ms Howard said: “There’s no chance we’ll be able to move it short of using a forklift so it will have to stay were it is.

“I think we might need a saw at this point to actually cut into it. I’m hoping it will be big enough we can get a picture of the children inside it.”

As for the massive amount of flesh inside, she said it may all end up in the bin, explaining: “Last year we tried making pumpkin soup from the insides but we weren’t a fan.

“I’m not really sure how much flavour there will be in a pumpkin so large.”