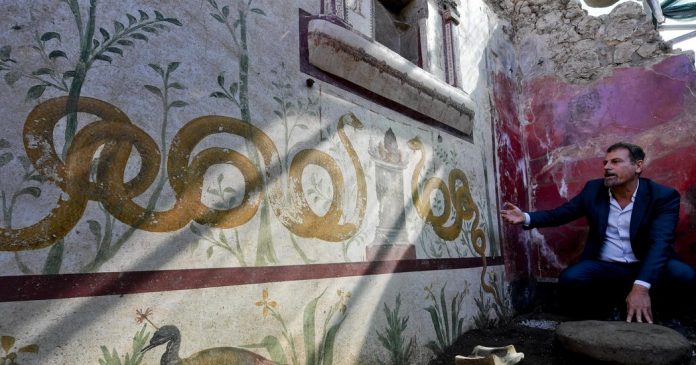 Excavators working in the Roman-era city of Pompeii, Italy, have uncovered an ancient shrine surrounded by idyllic paintings of plants, snakes, and a lifelike peacock.

Massimo Osanna, the archaeologist in charge of the work, said in a telephone interview on Wednesday that the site was “exceptional,” citing not only “the incredible decoration of the wall painting” but also the fact that it was “very well preserved.”

The shrine, known as a lararium, is embedded in the wall of a house and is flanked by images of Roman gods central to household rituals. The room, along with the rest of the house, has not yet been completely excavated, but it also contains a garden and a small pool. Beneath the shrine, an altar holds traces of burned offerings from almost 2,000 years ago.

Shrines were a standard part of Roman households. “Every house had a lararium of some kind,” said Ingrid Rowland, a professor at the University of Notre Dame and the author of “From Pompeii: The Afterlife of a Roman Town.” But, she added, “only the wealthiest people could have afforded a lararium inside a special chamber with a raised pool and sumptuous decorations.”

Like many Roman wall paintings, the mural has an element of visual trickery: the painted peacock appears to be walking on the real garden, and a snake drags one end of its tail lazily over the edge of the frame.

Snakes, birds, and trees are typical to these kinds of shrines. Eggs painted on the altar symbolize fertility, according to Mr. Osanna. The offerings that left the residue on the altar could have been food that also represented fertility, such as more eggs, figs, or nuts, Mr. Osanna said.

The colors on the walls have been saved by volcanic ash and rocks from the eruption of Mount Vesuvius in A.D. 79, which kept out light and water for nearly two millenniums.

In the only witness account of the eruption to survive, Pliny the Younger wrote that the sun went out like a lamp and that he was caught in banks of ash as thick as snow drifts. “You could hear the shrieks of women, the wailing of infants, and the shouting of men,” he wrote in a letter to the historian Tacitus.

Those closer to the blast, in Pompeii or Herculaneum, died hunched in the same positions in which excavators found them centuries later. Many were fixed in place along with the paraphernalia of their daily lives, including items as diverse as cult artifacts, loaves of bread and rude graffiti.

The first excavation of the site took place in 1748 and many since then have been destructive — early archaeologists tended not to adequately care for or document what they had found, and it can be hard to tell what paintings looked like before restoration, Mr Osanna said. That makes this set of wall paintings, complete with their vibrant original colors, an important discovery.

Some of the other iconography is harder to parse: One wall painting depicts a man with the head of a dog. He could be “a Romanized version of the Egyptian god Anubis,” Dr. Rowland of Notre Dame said, adding that, “the Pompeiians, like most Romans, were fascinated by Egypt.” But, she added, “there are also ancient tales of dog-headed people in the East who had excellent, just government and communicated by barking.”

Clues to the dog-man’s identity may lie in the unexcavated parts of the house. The conservationists will next attempt to remove the floor of the courtyard to access the house’s lower level.

Mary Beard, a professor of classics at Cambridge University, said in an email that about “one third of Pompeii is unexcavated,” and that, for the moment, she believed “most of it will stay that way.” She added that this part of the site was “safest under the ground, and one day there will be even better techniques for understanding it than we have.”

“But,” she continued, “it is very exciting just to have a few new discoveries.”