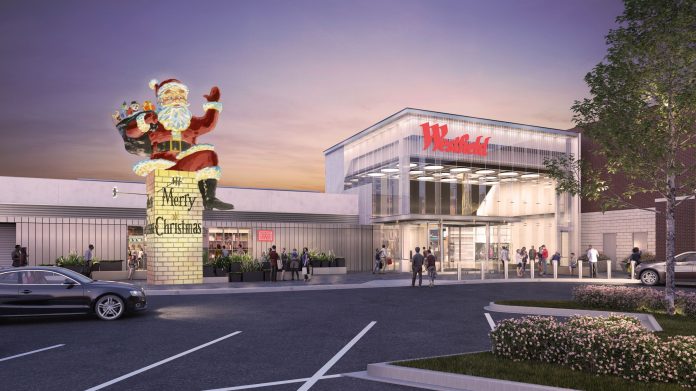 A rendering of the new Santa that will be installed at Garden State Plaza(Photo: Westfield Garden State)

Paramus and mall nostalgia fans are calling it a holiday miracle on Routes 4 and 17.

The Big Santa — the most-loved holiday decoration at Garden State Plaza from its days as an open-air mall — is coming out of retirement after more than three decades.

The mall has arranged for a reproduction of the original Saint Nick statue, complete with his signature size 90 boots, waving arm, and sack of toys, to be installed in the parking lot. The new Big Santa will be perched on top of a chimney, just like his predecessor, but will be smaller, at 45 feet tall, compared to the 51-foot-tall original.

The Big Santa last appeared at Plaza in the early 1980s, as the center was being converted into an enclosed mall. Since then, photos and memories of the holiday attraction have appeared on countless nostalgia and history websites, blog posts, and in newspaper and magazine articles.

From the time the mall opened in 1957 until the early 1980s, the annual appearance of the Big Santa, perched on top of a 25-foot-high chimney in the parking lot of the mall, signaled the start of the holiday shopping season in Paramus.

The story continues below the gallery.

“It was something everybody looked forward to every holiday season. It was a mainstay not just for Paramus, but for the whole region,” said Paramus Mayor Richard LaBarbiera. “Big Santa is our Rockefeller Center,” he said.

Big Santa is the memory from the past that is mentioned most often as something residents would like to bring back, the mayor said. Residents have told him that being able to see Big Santa again wouldliterally bring tears to their eyes, and evoke memories of simpler, happy childhood days.

“Big Santa is our Rockefeller Center”

“There are two things people always talk about when they reminisce about growing up in Paramus,” the mayor said. “Number one is the Santa at Garden State Plaza and number two is the mural at Alexander’s. And there are constant calls for their return.”

“I think the Santa and the mural are symbols of Paramus during simpler times,” LaBarbiera said, adding that the nostalgia for Big Santa represents a yearning for those times.

The Santa will be installed this month, with a public lighting ceremony scheduled for Nov. 15 at 6 p.m.

“Like its legendary predecessor, it is our hope that the new Big Santa – along with all the new holiday decor that will debut this season throughout the shopping center – will come to symbolize the joys of the holidays,” said Jay Daly, general manager of Westfield Garden State Plaza, which is owned by Unibail-Rodamco-Westfield.

The original Big Santa was visible form Route 17. It towered over the ground level stores at the open-air mall and was so big shoppers used him as a landmark to find their cars in the parking lot.

How big was he? He was so big he had to be divided into 20 pieces, and installed using giant cranes. He was about one-fourth of the size of the Statue of Liberty, including its pedestal, and about two-thirds the size of a typical Rockefeller Center Christmas tree.

The fate of the original Big Santa is unclear. There are a number of “urban legends” about its whereabouts, LaBarbiera said, ranging from “sitting in a warehouse somewhere” to “sitting in a landfill somewhere.”

The new version of Big Santa, with its scaled-back size, makes it more suitable for parking lot selfies with Santa. And in addition to being better suited for social media, this Big Santa has another change to make him more socially acceptable in today’s world. He has given up the pipe that was clamped between his lips in the original statue.