Home Garden A Whale Of A Good Time 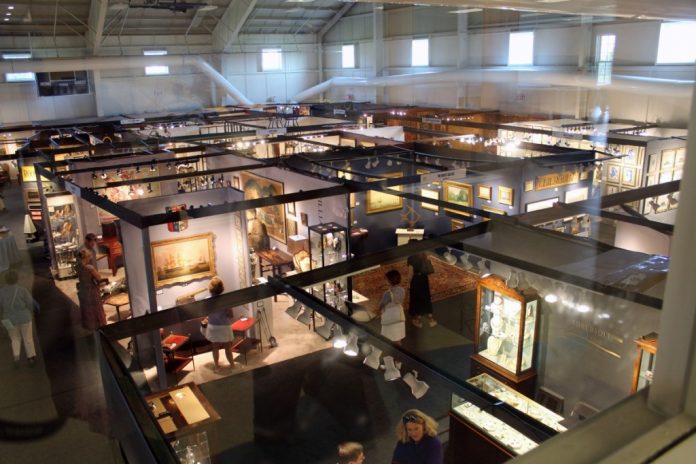 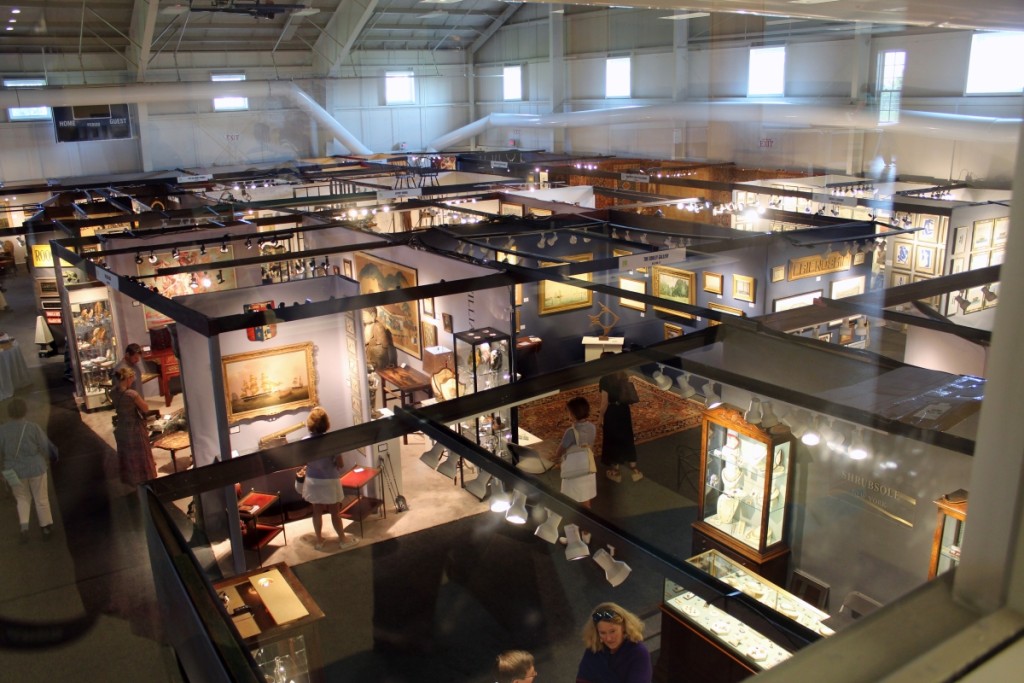 The 2018 Nantucket Summer Antiques Show, at the Boys and Girls Club of Nantucket.

NANTUCKET, MASS. – Over the years, the Nantucket Summer Antiques Shows, which is an Antiques Council show, has benefitted several organizations and has been held in a variety of venues. This year, the August 10-13 show benefitted four local organizations: the Nantucket Preservation Trust, the Nantucket Historical Association, Theater Workshop of Nantucket and the Nantucket Garden Club. For the third consecutive year, the show took place at the Nantucket Boys and Girls Club. Thirty-two dealers took to the floor, with several new to the show, including two international dealers: Callaghans of Shrewsbury, England, and Martine Boston of Ireland.

Nantucket is a summer playground for a well-heeled and sophisticated art and antiques-saavy crowd and the antiques show always hopes to capitalize on their spending potential. The downside of selling in Nantucket is, of course, that when the weather is sunny, potential buyers head to the beach. Fortunately, the weather for much of the show seemed to be on the side of the dealers, many of which reported good sales.

Nantucket baskets, whaling-industry and nautical antiques and marine paintings are perennial favorites, and dealers brought a good variety of objects carefully curated to appeal to those collectors. That was exactly the right strategy for Parke Madden, Paul Madden Antiques, who said they had a good show. Within the first hour of the show opening on Friday, the Sandwich, Mass., dealer had sold a painting by Henry Eddy, which had been used in promoting the show. Madden also sold a Nantucket map that was front and center in his booth, Nantucket silver and baskets and other maritime collectibles. One item that sells particularly well in Nantucket is whaling harpoons, which Madden thinks should be in every house on Nantucket. One of Madden’s more unusual sales was a giant clamshell, which he sold to a local buyer at the very end of the show.

Another dealer who said he had a “good show” and reported several sales was Paul Vandekar of Earle D. Vandekar of Knightsbridge, Inc, Westchester, N.Y. Vandekar said he sold across the board, including a Japanese eagle needlework picture, a set of engravings, nautical works and Chinese export and English pottery.

Within the first few hours, Roberto Freitas had sold a nest of modern Nantucket baskets and a swan-form carousel seat. By the end of the show, the Stonington, Conn., dealer had sold a large carved eagle plaque, a marine painting and some smalls.

English furniture was well represented in the booths of Roger D. Winter, William Cook and Yew Tree House Antiques. Winter made sales to both new and existing clients, selling a William and Mary inlaid walnut chest of drawers, a pair of 27-inch-tall Chinese Celadon vases, a provincial French farm table and a pair of Nineteenth Century walnut armchairs. William Cook, who said the show was “pretty good,” sold an early Nineteenth Century console table and a pair of midcentury end tables, at the show. I also sold a Scottish Regency long case clock, circa 1820, to a buyer from Maryland. One of his more eclectic sales was a pair of petrified wood tables with bronze bases and 120 million-year-old tops. 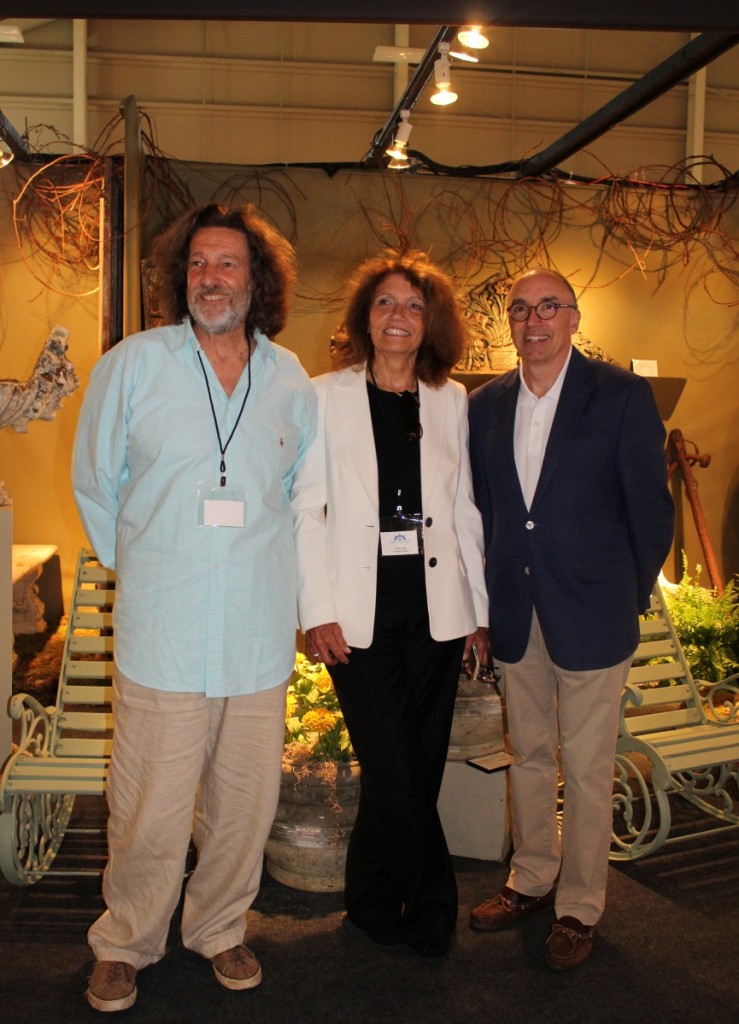 Victor Weinblatt said after the show, “Having done the Nantucket Show for 38 years, it becomes a critical part of the fabric of one’s life. The extraordinary number of island friends, customers, committee members and associates makes for an annual joyous homecoming celebration.

The show was exceptional for me, the best in many years. We sold 34 objects, most of them American folk signage. Our premiere pieces sold quickly, including a rare six-piece complete set of a Burma Shave limerick, a rollicking Nantucket appropriate rhyme about a fisherman; a huge “Chicken Dinner 5 cents” cadmium yellow sign from the 1930s was akin to a modernist painting, an Edward Rusche or a John Baldassori; a set of circa 1940s graphic and hilarious beer signs; a Heigh-Ho sand paint sign, which echoed a cherished father’s greeting for its buyer. There was a boldly dimensional golf game signed and dated 1929 and a graphic and diminutive paint-decorated plant stand. On the most historic of islands, the Nantucket Summer Antiques Show has become an annual tradition with a history of its own.”

Another fine art dealer at the show was Jeffrey Cooley, the Cooley Gallery, Old Lyme, Conn. Cooley is known for his inventory of fine American paintings; he had brought them to the show and sold some of them, but the most interesting thing in his booth was a selection of stunning contemporary delft-style ceramics made by Mara Superior, an artist living and working in western Massachusetts. After the show, Cooley said they had garnered a lot of interest and he had sold two of Superior’s smaller pieces, in addition to a few paintings. He was pleased to have reconnected with an old client on the last day of the show.

For those looking for Asian works of art, Ralph M. Chait Galleries, Lotus Gallery and Imperial Fine Books and Oriental Art had a comprehensive range of offerings curated to appeal to a wide variety of tastes and budgets. When reached after the sale for comment, New York City dealer Stephen Chait, who has been participating the Nantucket show for eight or nine years, said they had sold some pottery and Chinese export porcelain. While he did not notice any particular buying trends, Chait said marking period porcelains and other high-quality porcelains continue to be sought-after. Chait said that the Nantucket show is always a highlight of their summer, where they look forward to seeing familiar faces and making new friends. Some of Chait’s initial sales included a pottery camel and pottery dancer. 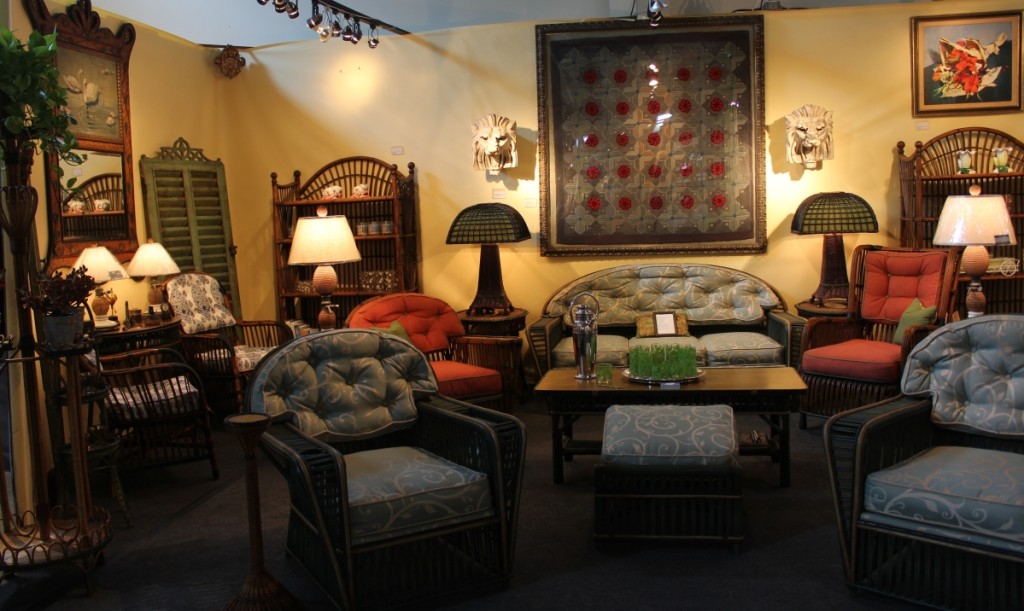 Of all the lovely things in his booth, James Butterworth pointed out a set of four armchairs with modern blue and white upholstery, two of which are seen along the far wall in this picture. The detailing on the arms was good, the chairs had full skirts, and it is rare to find such a large set. Antique American Wicker, Nashua, N.H.

This was Alexandre Acevedo’s first year of doing the Nantucket show. The New York City dealer, who is primarily a paintings dealer, had brought a good variety of American, English and Continental things, including a number of small lacquered or painted boxes. One of the more prominent works that garnered a lot of attention in Acevedo’s booth was a child’s portrait, John W.B. Parker, a Nantucket boy that had been painted by George Fish. Done in 1846, it had a wonderful inscription on the back. Speaking after the show, a representative for Alexandre Galleries said they had a “good” show.

Prints are often a great affordable show option for buyers, and two print dealers were in residence: Dinan & Chighine, Kew, Richmond, United Kingdom, and D.M. Delaurentis Fine Antiques Prints, Philadelphia. Of particularly striking note in the booth of the former was a set of 12 prints of whales and dolphins, which could be expected to find a buyer in Nantucket. In the booth of the latter, Denise DeLaurentis had a terrific show. She said the show was great, not just for sales but also in the quality and quantity of guests who came through. She made several sales throughout the weekend, including a set of four whaling prints, a Frederic S. Cozzens yachting print titled “Midnight on Nantucket Shoals,” and Charles Turner’s 1836 print of a celebrated English cow, “Yorkshire Rose.”

With younger buyers preferring a more modern or eclectic aesthetic, is it not surprising that many dealers bring more contemporary pieces, whether artwork or furnishings. One of the most interesting pieces in the show was a circular table with Jeffrey Henkel, Pennington, N.J., that had a fossil-embedded top over a contemporary metal base. It looked great in front of a carved wooden fireplace mantel. Speaking afterwards, Henkel said it had an incredible amount of interest, as did a set of metal Windsor chairs. He said the show and the crowd had energy and was a good mix of traditional and contemporary. He sold some painted furniture, a campaign chest, a variety of sculptures, a carved stone lion, a good Regency chair and a turn-of-the-century French industrial shelf. He noted that he sold almost exclusively to buyers younger than 60.

Martine Boston Antiques, Lisnagry, County Limerick, Ireland, brought a fabulous pair of Delphin Massier majolica vases, circa 1880, which were the largest Massier made and which were in a striking red-peach ombre glaze with striking applied butterfly decoration. Nicholas Boston had priced them at $29,000 and said they would appeal to collectors of majolica, decorators or would simply be the cornerstone of collection of French ceramics. 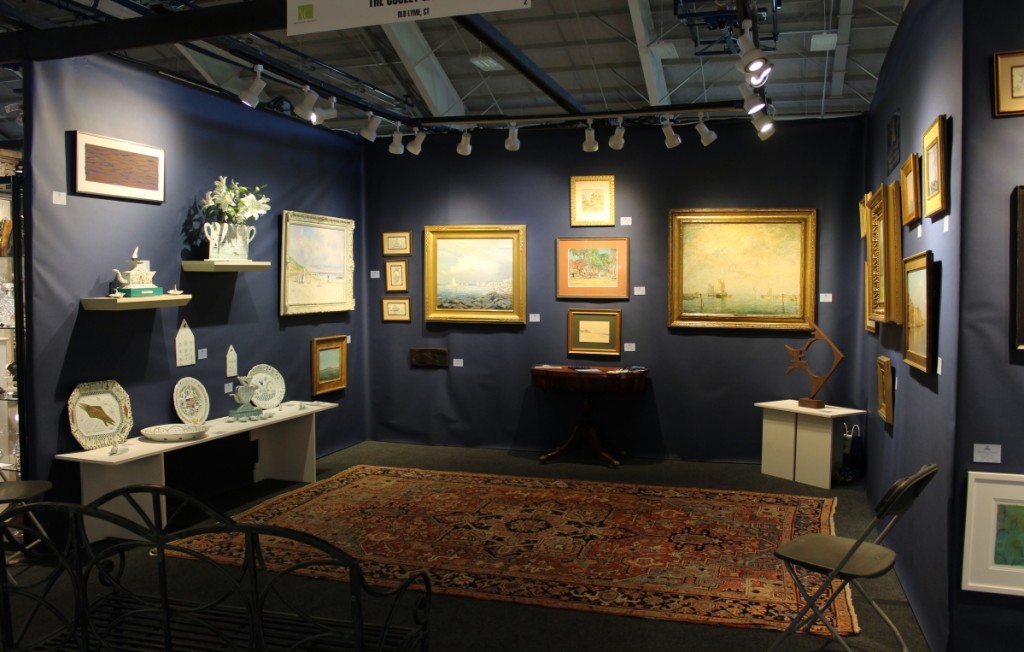 Known for Nineteenth and Twentieth Century paintings, Jeff Cooley also brought a selection of contemporary delft ceramics by Mara Superior, who lives near Northampton, Mass. Cooley said the interest in Superior’s works was consistent, and he sold two of her pieces. The Cooley Gallery, Old Lyme, Conn.

Jim McConnaughy, S.J. Shrubsole’s senior vice president, said afterwards that they were pleased with how they had done. Not only did they sell both jewelry and silver, but they sold a lot of mid-range pieces, and made some new clients. McConnaughy said the traffic seemed typical of other shows they participate in but he thought showgoers responded well to the event late on Sunday afternoon, which featured members of the Theater Workshop of Nantucket performing selections from the musical Oklahoma. He said it was great when shows do something different.

Other jewelry dealers offered both formal, studio, antique and costume jewelry. Moylan-Smelkinson/The Spare Room, Baltimore, Md., specializes in Georgian and Victorian jewelry, Eighteenth and Nineteenth Century English ceramics in Japonesque patterns, whimsical figural collectibles and decorative objects. The oldest piece of jewelry she had was a circa 1650 ring. The booth stock ranged in price from $200 to $25,000, so truly something for everyone. Lawrence Jeffrey, Litchfield, Conn., had a more formal-looking selection that included some fun design jewelry. When asked about buying trends, they said they do a lot with colored stones and big, bold fashions.

Garden furnishings and decorations were represented by Finnegan Gallery, which is owned by Kaye Gregg, the show’s director, and Marty Shapiro, the president of the Antiques Council. Their booth was front and center on the show floor and this year they had one of their best Nantucket shows, selling a pair of French curved wood orangerie benches, a Cotswold stone armillary, a French iron and marble top bistro table, a French highly decorated wood door, frames and much more.

Speaking after the show, director Kaye Gregg said, “I think the opening preview crowd was definitely a crowd that was interested in antiques and many sales were made on preview. Attendance was on par with previous years, Sunday being particularly strong with cloudy skies. Sales were helped by the attendance of some nationally recognized interior designers shopping for island clients.”