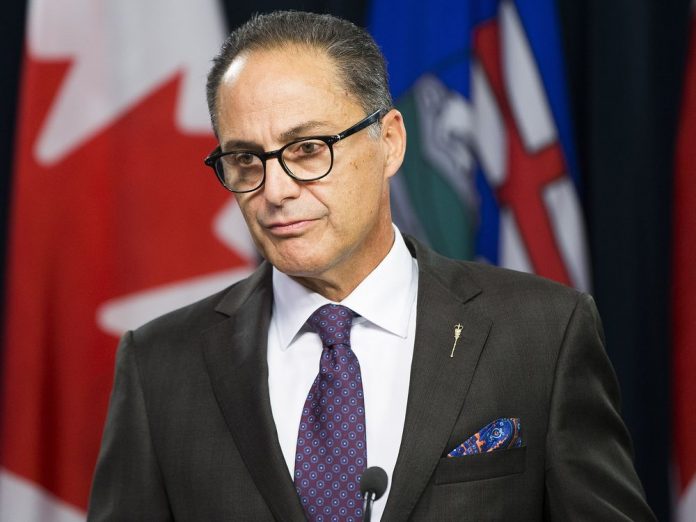 Alberta’s latest economic update boasted of strong growth in the first half of 2018-19, but warned of a future slump due to the brutal oil price differential pummeling energy producers.

“The oil price differential is a crisis for Alberta and a crisis for Canada,” said Finance Minister Joe Ceci at a news conference Friday.

The second-quarter financials projected a $1.3-billion reduction in the provincial deficit, totalling $7.5 billion for 2018-19.

“There are some things that Albertans can be optimistic about,” Ceci said. “The gains made over the first six months of the fiscal year are enabling us to further cut this year’s deficit projection.”

The reduction, which was seen in the August financial update, was mainly attributed to resource revenue brought about by higher than expected oil prices and a low U.S.-Canada exchange rate.

Ceci said it means the province is on track to balance the budget in 2023-24.

But the volatile oil differential — forecast to average US$29.25 per barrel for the fiscal year — weighs on Alberta’s economic outlook, he said. The price gap is up by US$6.90 compared to the March budget.

The oil differential is also affecting corporate income tax revenue for 2018-19, resulting in $362 million less than the March budget projection, bringing that line item to $4.2 billion.

“The economics of the oil and gas industry have changed drastically because of the differential crisis,” he said. “Albertans are very concerned.”

Earlier this week, UCP Leader Jason Kenney called for 10 per cent mandatory production cuts to address the differential. He said it was an immediate solution necessary “to stop the bleeding.”

Franco Terrazzano, Alberta director of the Canadian Taxpayers Federation, said the government’s “fiscal mess” is the result of continued overspending.

“The fundamental issue with how the Alberta government is budgeting is that they are hoping for a boom to balance the books, rather than taking the more prudent approach and cutting spending,” he told reporters.

Crude-by-rail proposal not yet on the books

Friday’s update comes on the heels of Premier Rachel Notley’s announcement that Alberta will buy trains to move more crude out of the province to curb the oil glut, starting late 2019. The full complement of rail cars would ship out in 2020, carrying 120,000 barrels per day.

The Alberta Petroleum Marketing Commission (APMC) is negotiating with rail manufacturers and suppliers, and financial details haven’t been released.

The province asked Ottawa to fund crude-by-rail to relieve producers, but the federal government has yet to give a firm answer.

In recent weeks, WTI has been priced between US$65 and $50, but Western Canadian Select has been valued at much less than the U.S. benchmark.

On Friday, the province increased its forecast of the average West Texas Intermediate oil price to US$64 per barrel from US$59 per barrel for the year.

The oil differential projection, pegged at US$29.25 per barrel, was averaged out over the year, taking into account prices before energy producers were hit hard in October. At its peak the differential reached about C$45 per barrel.

The latest projections assume the differential will average between US$30 to $35 for the rest of the fiscal year.

The province estimates the oil differential is costing the Canadian economy $80 million per day, though estimates vary.

“We have an access to tidewater issue that can only be fixed with pipelines,” Ceci said.

Other highlights in Friday’s update included higher than expected revenue for Alberta’s newest industry. The Alberta Gaming, Liquor and Cannabis Commission forecasted $833 million in net income for 2018-19 for liquor and cannabis sales, up from $794 million.

Earlier this month, the AGLC announced it wouldn’t grant new cannabis retail licenses amid a national supply shortage that has left stores in need of stock.