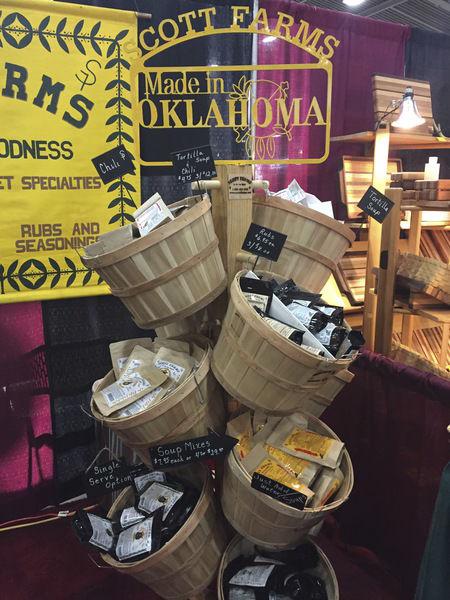 Shirt designers Tina Bush and her daughters are relative newcomers to Fin and Feather Resort’s Fall Festival — they’ve only been coming for about 20 years.

The festival has attracted crafters and buyers to the Gore resort for the past 50 years.

“She contacted local hobby clubs and arts clubs,” Pool said. “Anybody she could find that could do anything, she got them to come and set up.”

She said she was a little girl in the festival’s early days.

“I think we used just one building,” she said.

“It’s a great time to start your Christmas shopping,” Pool said. “Most people come to shop, but some come to eat.”

Larry Scott said he’s been selling soup mixes and seasonings at Fin and Feather for more than 30 years. He said his daughter lives in Fort Gibson.

“We’ve got a good customer base that comes back every year,” Scott said. “The crowds are good. It depends on the weather. It looks like this weekend is going to be pretty good. It was hot the past two years.”

Bush said she and her daughters have sold their shirts in Michigan and Alabama. But they stop at Fin and Feather each September.

“That’s my favorite kind of show,” Bush said. “The crowd there is good. It’s a good way to start the fall. Everyone there is so nice. It’s just kind of a tradition.”

The scenery around the resort is beautiful, Bush said.

Bush said she started decorating shirts when she lived in the south. She said she uses 100 percent cotton clothing made in the United States.

“I do some painting, then I put it on a silk screen and print it,” she said. “Then I paint over that. We hand block the background.”

She said this year’s shirts will feature a lot of flowers, Santas and elves.