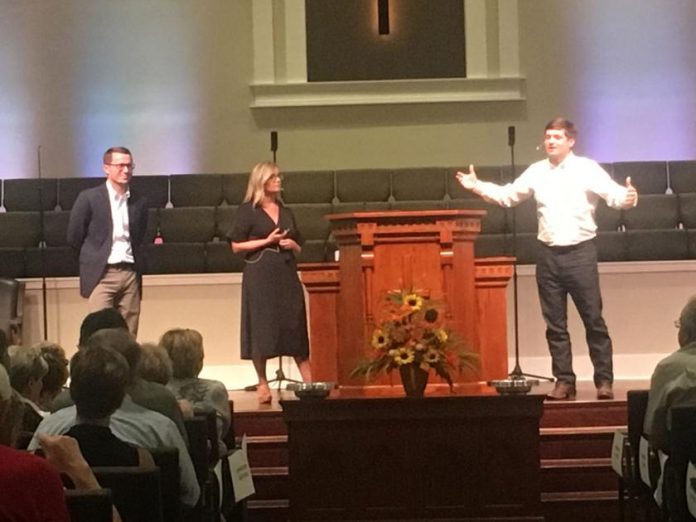 Filled with a butcher shop, mercantile, galleries, furniture stores and even a cookie dough store, the streets of Laurel are coming alive.

Just over a decade ago the scene was very different, an empty downtown with vacant buildings sat succumbing to the passing years. However, in the early 2000’s three newlywed couples fresh out of college, the Rasberrys, Nowells and Napiers, made a decision to return downtown Laurel to her glory days and restore her they did.

Fast-forward to 2018 and the three families have seen vast growth in their once abandoned downtown.

In 2007 the group of friends established the Laurel Main Street program adding 30 new businesses, over $40 million in private investment to date, and net over 250 new jobs. Downtown Laurel is alive again bustling with activity.

From new families to life-long residents the town gathers together in the downtown district for movie nights, chili cook-offs, holiday events and more.

Throw in their HGTV show, “Home Town,” and there is no doubt the trio of couples have been wildly successful, however they are quick to point out that the show didn’t make the town, rather the town made the show.

An HGTV fan, Polk County Chamber of Commerce Executive Blair Elrod made the trek to Laurel in July 2017 to see the town and historic charm she admired on the show.

“I visited Laurel prior to joining the Chamber as the Executive Director because I was drawn to the similarities between our downtown districts and Laurel,” Elrod said. “I wanted to see for myself what their town looked and felt like to grasp if I could somehow bring that back to Polk County.”

Elrod and her husband made the 12 hour round trip in one day, vowing that they would return.

“We loved the historic downtown feel of Laurel. Each building was renovated to its’ historic significance and the design of each shop window all flowed together. It was as though each building was distinct, but together the style of the town relayed one voice and one vision,” she said.

Ten months later the Elrods returned to Laurel while passing through on their way to Louisiana.

“The Rasberry’s were so kind to host us in their luxury Airstream Airbnb and we enjoyed every minute,” said Elrod.

Once returning from her vacation, Chamber Board member and The Perch on Marble owner, Stacey Lovvorn approached Elrod about her trip to Laurel and the idea to bring the HGTV stars to Polk County was born.

“Stacey and I reached out to the group with the idea and were very impressed,” Elrod added.

Mallorie and Jim Rasberry along with Josh Nowell travel the country telling their story of a downtown comeback and when Lovvorn and Elrod called there was doubt about why they were successful.

“They had already researched our community. They asked about the West Theatre and the Silver Comet Trail. It communicated loudly that they cared,” said Elrod.

With the help of the City of Rockmart, City of Cedartown, Georgia Power and Floyd Medical Center, the Chamber slated the Downtown Comeback for September 20th at Victory Baptist Church.

Prior to the show the three stars spent multiple days exploring Polk County, talking with business owners and citizens, strolling through museums and eating at locally owned establishments.

“We were very impressed with both cities. If we had in Laurel what you guys have here…it would have been amazing,” said Nowell during the presentation.

VIP ticket holders were treated to a meet and greet and private Q&A session before the main event began.

Elrod introduced the group and they took the stage after a video of their comeback story played. The Rasberrys and Nowell told their story of Laurel’s boom as a lumber mill town, its’ bust in the downturn of the economy and how they were determined to bring it back.

After returning from college the three newlywed couples purchased a loft apartment downtown, renovated it and over time began purchasing buildings downtown for as low as $5 per square foot. The couples then would sale or rent out the buildings to tenants who also saw the same vision for a better Laurel Main Street.

Eventually the three couples would go on to purchase one of the most dilapidated buildings in downtown and turn it into the Laurel Mercantile where only American made products are sold.

Mallorie, the vice president of Procurement for the mercantile told attendees, “If we are serious about revitalizing downtown we have to be serious about supporting our businesses here at home, and selling American made products.”

Along the way their friend Erin Napier chronicled their journey of bringing Laurel back on her Instagram and online blog which caught the eye of a HGTV executive who reached out to Napier about a possible TV show.

The Rasberrys, Nowells and Napiers quickly prepared for their test pilot with only weeks to completely renovate a three-thousand square foot home.

“We were on a budget. We were pulling décor off our walls at home, anything we could find,” said Rasberry. The pilot was successful and HGTV’s Home Town was born. Mallorie’s husband Jim explains, “we are now filming Season 3 and it has been a ride.”

The trio pointed out that everything you see on the show is completely real and not fabricated. From shopping for décor to making furniture in Ben Napier’s shop, they are committed to being 100 percent authentic.

The group also explained their lighting project, graphic design venture to give the town cohesiveness and shared ideas for events in the Polk County community.

The three stars will continue to be involved in Polk County as they will be in contact with both the City of Rockmart and the City of Cedartown briefing administration on their findings while visiting both towns and their ideas for revitalization.

“I hope this event has encouraged and inspired our business community as well as those thinking of opening businesses downtown,” said Elrod.