Home Bedroom Game of Thrones: All the References You Might Have Missed in the... 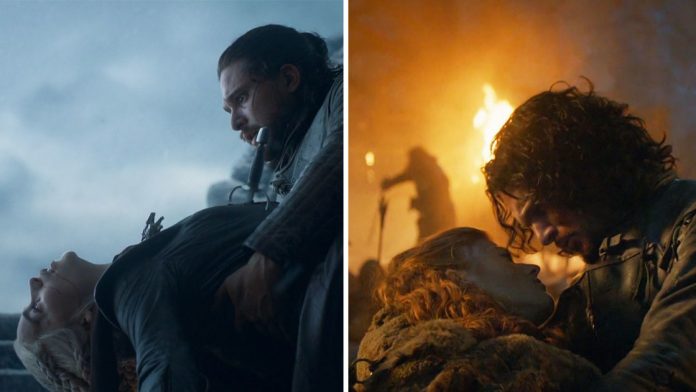 This post contains frank discussion of several plot points from Season 8, Episode 6 of Game of Thrones, “The Iron Throne.” If you’re not all caught up, or would prefer not to be spoiled, now is the time to leave. Seriously: this is your last chance, and you won’t have another, so get out while the getting is good.

Are you ready? Here we go!

The Thirst Is Real in Westeros: Sigh, okay, let’s get this out of the way. Yes, there is another rogue, anachronistic drink in Westeros this week. This time it seems to come courtesy of actor John Bradley who kept himself hydrated while filming the Great Council scene in the Dragonpit. Okay that’s it. We saw it. I beg you not to make a week-long joke out of it.

Ghosting: Speaking of controversies from earlier in the season, all the sturm and drang around Jon’s abbreviated farewell to his pet direwolf Ghost looks a little silly now that the two got this cozy little reunion in the series finale. Of course Jon couldn’t give his pet a teary farewell at Winterfell in Episode 4 when he was scripted to be reunited with him by Episode 6! The staging of this reunion is a callback to the tableau Jon and Ghost struck in Season 4, Episode 5 when they’re brought back together after a brief separation. “I missed you, boy,” Jon said to Ghost at the time. We can assume he was thinking the same thing when they were brought back together at the Wall.

The Frodo Ending: On the subject of Jon Snow and emotional goodbyes, George R.R. Martin fans have known for years that the author planned to model some of his final story on the end of The Lord of the Rings. He’s even specifically mentioned the bittersweet “poignancy” of Frodo leaving Middle Earth for the Grey Havens as a model for the tone he intended to strike.

You can read more about the connections between Jon Snow and Frodo Baggins here, but there was no doubt the show was having some fun with that comparison when it had the Stark kids—Arya, Sansa, and Bran—line up like those teary little hobbits at the docks in The Return of the King.

The Lord of the Rings comparisons abound in this episode whether it was Daenerys making Gollum eyes at the Iron Throne. . .

. . .or the throne itself melting into a puddle of molten lava. In The Lord of the Rings, the Ring of Power could only be destroyed in the fires of Mount Doom because that is where it was forged so many years ago. The Iron Throne, we should note, was initially forged by Aegon Targaryen who used, you guessed it, dragonfire to make it. So it’s very J.R.R. Tolkien for dragonfire to be the seat’s undoing. Speaking of the seat of power, Daenerys’s description of it in the finale—“I imagined a mountain of swords too high to climb. So many fallen enemies you could only see the soles of Aegon’s feet.”—is a cute little call out to George R.R. Martin, who always imagined the throne to be much, much bigger than it ever appeared on the show. For reference, this is what it looked like in Martin’s mind.

There are a lot of callbacks in that finale throne room scene to a vision Daenerys had in Season 2 in the House of the Undying. The shot of Dany finally touching the throne in the finale perfectly echoes a shot from that vision where she gets this close but is pulled away.

There are also a few poignant death tableau callbacks in Daenerys’s demise. There is, of course, the reference to Jon’s other girlfriend, Ygritte, whom Jon cradled in a similar fashion. We should also point out that in embracing and then shanking Daenerys, Jon is using the tried and true assassination technique preferred by House Bolton. Jon Snow sends his regards.

Even in death these two can’t escape each other.

What’s West of Westeros?: Speaking of escaping, many close watchers saw this Arya departure coming. George R.R. Martin reportedly considered a spin-off series featuring an adult version of the Stark girl and, I mean, you just don’t seed something like this in Season 6 and not pay it off. Right?

But what perhaps none of us expected was that Arya’s final beat would so clearly mirror the Season 4 finale “The Children” complete with sweeping shot of her on the prow of a ship and Ramin Djawadi’s choral arrangement of the main theme which originally debuted in that episode.

A Dream of Spring: Arya’s departure from Westeros is a hopeful one. So, too, is Jon’s as we see a tiny shoot of grass poke up out of a thick blanket of Northern snow. This feels like it has to be a reference Martin’s proposed name for his final book: A Dream of Spring.

Speaking of Martin’s books, let’s talk about that A Song of Ice and Fire bomb. Last season, Archmaester Ebrose (Jim Broadbent) told Sam he was writing a “Chronicle of the Wars Following the Death of King Robert the First” (a.k.a. everything that has happened on HBO since Season 1, Episode 7). Sam wrinkles his nose and says he would call it “something a bit more poetic.”

And that, is of course, how we landed here in the finale.

The A Song of Ice and Fire inclusion also feels a bit like another nod to The Lord of the Rings which sees both Frodo and Bilbo Baggins chronicling all the adventures we just watched them have.

While we’re talking Maesters, Jon’s old mentor Aemon Targaryen got a shout out in the episode right before Jon followed directly in his footsteps. You can read more about how Aemon gave up his throne to his little brother and took the black here.

Queen in the North: Jon may have left his throne (what throne?) behind, but Sansa Stark finally got hers. The big “Queen in the North” moment is a clear callback to both Robb and Jon’s coronations, but it’s Sansa’s look that has people most hot and bothered. Costume designer Michele Clapton pulled out all the stops for a grey wolf gown embroidered in the red weirwood leaves that are so iconically associated with both the North and House Stark.

Sansa gets a special lupine crown and has her hair down and streaming past her shoulders—an unusual look for her. Some history buffs have wondered if this is meant to be a nod to another famous ginger queen who wore her hair down during her coronation: Queen Elizabeth 1.

The episode’s other queen, Daenerys, was wearing a black leather dress which felt more like a shout out to the Third Reich than a nod to anything Targaryen-related. But during her short reign in Westeros, Daenerys delivered on a bloodthirsty speech both she and Khal Drogo gave to the Dothraki back in Essos. “You killed my enemies in their iron suits,” Daenerys told the crowd of men who fought for her. “You tore down their stone houses. You gave me the Seven Kingdoms.”

A Fish, a Sparrow, and a Prince Walk into a Meeting: There were a number of familiar faces seated on the Great Council that elected Bran to rule the six kingdoms. You can read all about them here.

BRANding: There is a lovely Season 4 callback to Jaime Lannister in Brienne’s big emotional scene, but you may have also noticed a new raven sigil on her Kingsguard breastplate. King Bran has already begun decorating.

So, too, has his Hand, Tyrion, whose busy work rearranging the chairs around the Small Council table is a callback to his dramatic Season 3, Episode 3 entrance back when Tywin Lannister was Hand and Tyrion was mere Master of Coin. Tywin conjured up the ghost of House Lannister when he asks Bronn if he would “say the crown’s debt to you has been re-paid.” A Lannister always pays his debts—even if he has to use the royal coffer.

Stannis, another bad dad of Westeros, got a shout out when Davos did his best to emulate the Baratheon lord’s penchant for proper grammar. In exchange he got a new nickname courtesy of Bronn. King Bran’s Small Council of Tyrion, Sam, Bronn, Davos, and Brienne closed out the episode squabbling over municipal matters. (Oh and Pod’s a knight now. No callback there I just thought it was nice.)

The Small Council squabbles are, perhaps, the most George R.R. Martin-faithful aspect of the finale. Martin once said this about how he thought he might end A Song of Ice and Fire:

Ruling is hard. This was maybe my answer to Tolkien, whom, as much as
I admire him, I do quibble with. Lord of the Rings had a very medieval
philosophy: that if the king was a good man, the land would prosper.
We look at real history and it’s not that simple. Tolkien can say that
Aragorn became king and reigned for a hundred years, and he was wise
and good. But Tolkien doesn’t ask the question: What was Aragorn’s tax
policy? Did he maintain a standing army? What did he do in times of
flood and famine? And what about all these orcs? By the end of the
war, Sauron is gone but all of the orcs aren’t gone – they’re in the
mountains. Did Aragorn pursue a policy of systematic genocide and kill
them? Even the little baby orcs, in their little orc cradles?

But we didn’t end the scene on the boring subject of tax policies. The episode leaves Bran’s Small Council with a joke—one we’ve heard Tyrion try to tell several times before.

Back to the Start: Jon’s finale-closing sojourn North of the Wall exactly mirrors the opening shot of the pilot episode.

Sign up for essential industry and award news from Hollywood.

Isaac Hempstead Wright took Bran from innocent kid to . . . whatever the Three-Eyed Raven is.

Once upon a time, Lena Headey’s queen had long hair and a closet filled with colorful frocks. Now, she rocks a pageboy—and armored black gowns.

In Season 1, Emilia Clarke’s princess was sold into marriage to a stranger; now, she’s a warrior queen with three—no, two dragons at her back.

No other character’s coming-of-age has been as traumatic as that of Sophie Turner’s character—and nobody else may be as well equipped to survive Season 8.

Peter Dinklage’s Lannister black sheep has kept his quick tongue—and now has a beard and a gnarly scar to boot.

Long after King’s Landing crumbles into the sea, Conleth Hill’s Master of Whisperers will abide—looking exactly as appealingly sinister as always.