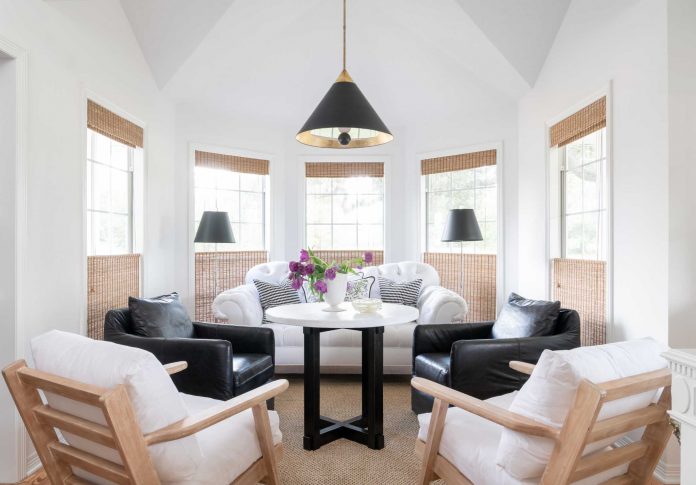 Renea Abbott lovingly caresses a Kelly Wearstler sheepskin barrel chair in her Shabby Slips store as she surveys the chairs, art, mirrors and other goods ready to be loaded for her newest venture.

The interior designer and shopkeeper has been a buyer at the semiannual Texas Antiques Week event in and around Round Top for decades, and now, for the first time, she’ll be a vendor. In addition to her 300-square-foot booth, she’ll have inventory in nearby storage so that as pieces are sold, she’ll replace them with new inventory daily.

She’s been loading up antique furniture and accessories for her booth space at the Market Hill shopping center on Highway 237 that opens in the fall and spring for diehard antiquers in the small Texas town where she and many other Houstonians have second homes. While many vendors, like Market Hill, are already open for business, the bigger Original Round Top Antiques Fair and Marburger Farm Antique Show open the first week of October.

“Round Top is changing now. So many Houstonians, … more people my age are getting places here,” said Abbott, who is 61. “People ask ‘what there is to do out there?’ It’s fun to do nothing, to not have a plan. They don’t think that because they don’t know how to unwind yet.”

What: the iconic Big Red Barn, annex and Continental Tent

General admission: $10 on site or at roundtoptexasantiques.com (one ticket is good for the full run of the show)

What: more than 350 dealers spread through nine tents and 12 historical buildings

What: 19 vendors (including Renea Abbott’s Shabby Slips) in a 119,000-square-foot, air-conditioned building (with restrooms)

What: A variety of European and American antiques scattered throughout several buildings

A tidy white modern farmhouse on 3 acres near the center of town is where Abbott and her husband, 67-year-old Greg Manteris go to chill out. Their main home is in River Oaks, and they also have a 7,000-square-foot home on Lake Austin.

All three bear her signature style: a sophisticated blend of black and white, new and old in an eclectic mix of modern, traditional and antique.

A native of Monroe, La., Abbott grew up exposed to beautiful homes and decorating ideas. Her mother — Barbara Carlton, who originally was her Shabby Slips business partner — had great taste and when Renea was a child, they’d visit her grandparents an hour away. Carlton would bring two home decor magazines for the drive. She’d look at one in the front seat and hand the other to Renea in the back seat. On the way home, they’d swap.

“From very early on, really as far back as I can remember, I was always looking at house magazines,” said Abbott. “Then my bedroom was so important. I remember painting my room black and white when I was about 13 years old. … I painted the paneling white with black around the bottom. I probably did it myself.”

Abbott studied at the New York School of Interior Design and went to work at the renowned Irvine & Fleming interior design firm in New York, handling homes of the rich and famous all over the world. Abbott herself worked on the home of hockey legend Wayne Gretzky, Michael Bolton and a member of the rock band, Kiss.

“I liked pretty things, but I just have gone away from all of that stuff. For me, simple is better,” Abbott said of her aesthetic then and now. “Black and white is an easy way to be classic and stylish — and it’s affordable.”

Back in the late 1980s, Abbott was dating a man who worked for Hines in Houston and came for a visit. She was looking for a Thomas Woodard rug and stopped in Manteris’s Creative Flooring store on Bissonnet. He didn’t have one, but Abbott left her business card anyway.

A handful of years later, Abbott’s mother was living in Houston and newly divorced. She was in need of a career, and Abbott had an idea. She’d been in a slipcover shop in California and knew there wasn’t a store like it in Houston.

Together they opened Shabby Slips, and they’ve been in their Bissonnet location nearly 28 years. Carlton, now 78, is retired and splits her time between Houston and Santa Fe, N.M.

When the store first opened, Abbott went to nearby shops to introduce herself. When she went into Creative Flooring, Manteris still had her business card from her visit several years earlier. They eventually started dating and married in 2001.

In the early days, the back of Abbott’s shop was the sewing room and the front was the showroom, filled with her mother’s furniture as display pieces to show how chic and tailored slipcovers could be.

Plenty of people came in for custom work, but customers kept wanting to buy the display samples, so ready-made furniture became part of their business. While about 90 percent of Abbott’s business is to interior designers making purchases for clients, Shabby Slips is open to the public. You’ll find new furniture that Abbott buys at market in North Carolina, with a mix of European antiques and lighting that ranges from antique to midcentury and modern.

That’s Abbott’s style in her store, with clients and in her three homes.

In Round Top, Abbott has just finished revamping a 3,200-square-foot home she bought last year. (Her previous house there was bought by her friends and clients, Kimberley and Richard Rolland.)

The home was built more than 25 years ago and had blue carpet in one bedroom, various wall colors and lots of square beige marbled tile.

Abbott’s reinvention brought black and white to every room. Except for rooms with wallpaper, they’re all now Sherwin-Williams “Snowbound,” a soft, creamy white and red-orange wood floors were refinished to a lighter, more natural look.

Two of the biggest makeovers were the master bathroom and kitchen. The original kitchen had glazed, cream-colored cabinets, counters covered in 4-inch white tile and beige marbled porcelain tile on the floors.

While the master bathroom’s floor plan didn’t change, the updates make it feel like a different room. Retro-style black and white flooring and bright white walls instantly make the room feel larger, and a frameless glass shower — replacing an enclosed one — visually opens up more space, too. A freestanding bathtub paired with soft brass plumbing is a chic replacement for the garden tub that ate up a third of the room.

What used to be a breakfast room is now a cozy TV room with a tufted settee, two black leather chairs and two white upholstered chairs. A black-white-tan sofa with four white chairs fills the living room, with two French antique tables in the center. They were a pair of stone-topped tables that Abbott found in a shopping trip to France. They sat in her store for a while and when they didn’t sell, she decided to put them in her Round Top home.

“Black and white, for me, is quiet. It’s easy and the least expensive way to decorate and get the most contrast,” Abbott said. “It’s … the most bang for your buck.”