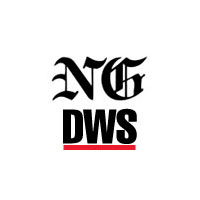 Students walk past one of several new displays throughout Monticello Middle School. Officials decided to inspire students by placing large quotes on blank walls building-wide, including this one in the cafeteria/commons. Staff and students joined forces to pick the messages that were used.

If you’ve never found inspiration in the restroom, then you’ve never visited the ones at Oakwood High School.

Last spring, student council members decorated the walls of the girls’ and boys’ restrooms with encouraging and positive phrases such as “One year: 365 opportunities” and “There is no one like you.”

Their peers say the artwork has brightened not only the once drab walls, but also their mood at times when they’ve felt stressed or down in the dumps.

“It’s really uplifting,” junior Grace Davis said, adding that the messages started appearing last spring during track season when “some people were kind of doubting me about what times I could get.”

“I went into the bathroom and saw ‘Prove them wrong,'” recalled Davis, who ran on the 3,200-meter relay. “Basically, it gave me the motivation to go out there and try my best for my team.”

Similar messages displayed in a variety of colorful, artistic ways have popped up in schools across the nation, including in East Central Illinois.

Whether hand-painted or spelled out in three-dimensional letters on a wall, printed on stairway and window decals or scrawled on a Post-It, their purpose is the same — to build a positive school culture and climate by inspiring and motivating students, fostering respect and kindness among them and making everyone feel included.

“With No Child Left Behind, it was kind of a one right answer. Now, we’re looking more at the whole child and problem-solving and deep-level thinking, and we want to motivate them to do that,” said Jennifer Frerichs, assistant superintendent of Rantoul City Schools, where large, 3-D words such as “dream,” “collaborate” and “succeed” decorate the walls inside and outside of J.W. Eater Junior High School’s innovation center. Similar ones are going up in the libraries at the elementary schools.

“There’s also a lot of evidence that we, as a society, need to put students’ social emotional health at the forefront,” she said, adding the district uses Conscious Discipline throughout its buildings.

Under that social emotional learning model, teachers, administrators and other staff use everyday situations, such as disagreements between students, to teach them how to manage their emotions instead of acting out, and be compassionate and supportive of each other, among other things.

“That creates this idea that we’re a family, and we care about each other and take care of each other, even when someone is grumpy,” Frerichs continued. “And that’s been part of why we’re putting these motivational words up — to help all of us remember that it’s important to care about each other.”

Some others said they got the idea to decorate their buildings with motivational words and sayings from Jostens Renaissance Education program. The company best known for making yearbooks, class ring and graduation products, as well as Super Bowl rings, launched the program more than 25 years ago to help schools improve their culture and climate.

“Our formula is to respect, recognize, reinforce and reward to get results,” said Mike Wolf, director of Renaissance Education. “Renaissance schools are hyper-focused on showing respect to academic achievement, character development and the ‘staffulty,’ the staff and faculty … including lunch staff, janitors, secretaries and bus drivers that also play a huge part in student success.

“Once you’ve defined what your school stands for, you want to reinforce those messages,” he said. “One of the biggest ways you can do that is with the look of the school.

“That’s where these great ideas of putting up these paintings, murals and posters in the restrooms and all over the school come in,” continued Wolf, who encourages student involvement in the design and execution. “It gives them a sense of ownership in the building. It makes them feel, ‘Hey, this is our place,’ because they had a hand in decorating it.”

That’s what Darin Chambliss did when deciding how to make Salt Fork High School more inviting and student-friendly.

“They said they wanted to put some things on the walls and make it more of our own,” Chambliss said, adding his wife was able to get a number of large canvases from the art supply company she works for.

Then using Storm colors, cheerleading coach Courtney LaFoe decorated them with some of the principal’s favorite motivational quotes, including “It is the mark of an educated mind to be able to entertain a thought without accepting it” by Aristotle, “You are what you do, not what you say you’ll do,” by Carl Jung and “You have the life you’re willing to put up with,” by author Gary John Bishop.

“They’re simple and to the point, and they transcend school and are more about life,” said Chambliss, who hung the canvases in the main hallway. He’s also planning to add more in the cafeteria and other areas.

“I think some kids feel like they’re a victim,” he continued. “If you don’t like your grades or have a bad job, you have the ability to change that. Sitting on the sideline and hoping things will change isn’t going to work. You’ve got to get in the game and be willing to play.”

Monticello Middle School administrators also polled students and faculty to come up with inspirational messages to put around the building. Then students voted for their Top 10.

“We contacted Jake Romano from Herff Jones for the black vinyl lettering, then we walked the building looking for areas where there were bare walls,” Assistant Principal Denise Troester said.

She said students are greeted with this message in the main hallway: “Every morning you have two choices: Continue to sleep with your dreams, or wake up and chase them”; and in the cafeteria: “In this school, we do second chances. We apologize. We forgive. We respect each other … We belong. We are a family.”

They also see four inspirational messages in the atrium, including “Your mistakes don’t define you.”

“We’re always looking for something to build our kids’ self-esteem and promote a positive environment,” Troester said. “With the amount of negativity out in the world that these kids are faced with, we wanted to make it so that when they came in here, this was a positive place and they could forget about all that. And it’s having an impact. You’ll walk by and hear them reading it.”

In the foyer of Cerro Gordo Elementary School, the paint is barely dry on a 12-foot high piece of artwork, featuring a quote from Bryan Skavnak, hand-painted by Haley Witts, a 2015 CGHS graduate, over the Labor Day weekend. Principal Jodi Neaveill said the quote, which reminds students “to be the nice kid,” ties in perfectly with the school’s theme.

“Last year, our theme was ‘be safe, be responsible and be respectful.’ This year, we decided to add ‘be nice’ to that,” said Neaveill, who repeats it in her morning announcements each day.

Now she’s planning to put some other inspirational messages in the hallways and restrooms.

“I think the more positive messages we can have, the better. We need more nice,” she said.

That’s why Principal Todd Wilson decorated the steps inside the main entrance of Rantoul Township High School and the gym balcony with inspirational stair decals from Jostens last year. When students climb the stairs, they’re reminded to “share joy and kindness,” “show compassion” and “put your best foot forward.”

“I just hope someone sees them during their day, and it just brightens their day,” Wilson said.

Neighboring Armstrong Township High School has featured the stickers on its stairs for a couple of years now, said Principal Darren Loschen. Before school started this year, he added a few to the restrooms. They say things like, “Work hard, play hard” and “You’re having a good hair day.”

“We also have one that says ‘Dream big’ on our giant safe in the hall,” Loschen said.

While he hopes the motivating words make students smile, he also hopes they get the underlying message — that “these small things show we care about them and want them to be successful.”

And a few years ago, Fisher Elementary Principal Jim Moxley worked with Inter-State Studio to create 15 or so character education posters, featuring some of the students at the time.

Their messages, which were framed and hung throughout the building, reinforce the school’s three “Rs” — be respectful, be responsible and be ready — promote anti-bullying and practicing healthy lifestyle habits.

For example, one, shows a sad girl standing at her locker while two more whisper behind her. Its message: “Stop Bullying! It isn’t BIG to make others feel SMALL.” Another titled, “We like to Exercise at Recess,” shows four boys holding a kickball on the playground. Its message: “Thirty minutes of activity a day keeps us healthy.”

“We’re constantly trying to teach kids how to treat each other … and how they can grow healthy bodies,” Moxley said. “They have been a good learning tool.”

“Every senior has to complete a senior project, so I was looking around the school to see what could be improved,” said Warren, now a freshman at Illinois Wesleyan University.

Then he remembered a presentation on improving school culture and making all students feel included that was given at Illinois State University as part of the Jostens Renaissance Tour.

“One student painted a bathroom to make it feel more comfortable and more like home. I thought that was a great idea because where do kids go when they’re sad or having a rough day? They go to the bathroom, so they can be alone. I wanted them to be able to look up and see a saying that would brighten their day and give them that extra push to make it through the day.”

After getting approval from Principal Tim Lee, Warren got Lowe’s to donate the paint and his cousin to make stencils. Then he recruited fellow student council members and a handful of adults — including his mom, Synthia Lane — to help him paint the sayings in the school’s colors. His mom also scoured Pinterest to help him select the sayings.

“It was a lot of fun,” senior Katelyn Blankenship said, even though she almost passed out from the paint fumes before the group remembered to ventilate the small area they were working in.

This year, Blankenship added her own senior project at the school — a “positivity wall,” which she covers in Post-It notes each with its own uplifting message. She got the idea from Heritage Junior High School.

People can read the messages, including “It is never too late to be what you might have been” and “Be encouraging. The world already has enough critics.” Then they can choose one that speaks to them and take it with them.

Blankenship is thrilled when she sees students — even teachers — perusing the Post-Its, and even more so when she sees one on someone’s binder or in a locker.

“It makes you feel better when other people are feeling better,” she said, who replenishes the messages every two weeks. “I think they just lift people up and help make a more positive school environment.”