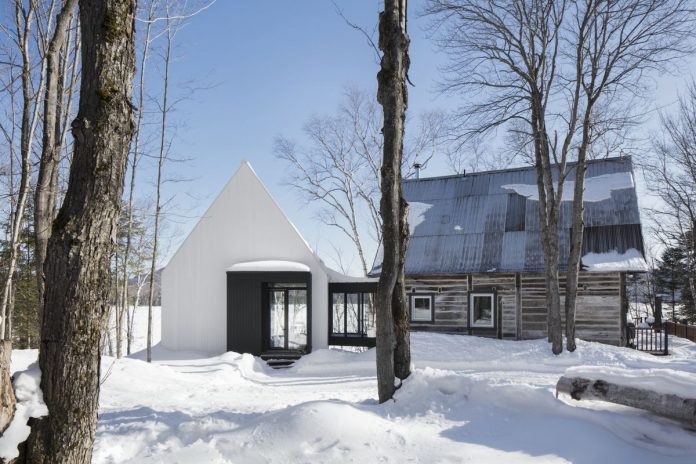 Benoît Dubord, Elise Guindon and their sprawling blended family of five children are keen sports enthusiasts who take great pleasure in fortnightly weekend trips up to a secondary residence in chalet country in the Lanaudière region north of Montreal.

The kids – three boys and two girls – range in age from 11 to 16; outdoor activities include downhill skiing, ski mountaineering and hockey in the winter, and sailing, water skiing and wakeboarding in the summer.

The traditional Quebec house Mr. Dubord owned near Saint-Donat was ideally situated for this active, outdoorsy family. The cottage is perched on a hill overlooking Lac Ouareau, a large body of water perfect for swimming, boating or just relaxing on the dock; in the winter season, access to ski centres is minutes away and the frozen lake makes for a great hockey and skating rink once a suitable surface is cleared of snow.

But as the children grew older, the three-bedroom house started to feel a bit cramped. Mr. Dubord – a lawyer-turned-entrepreneur – and Ms. Guindon began to explore ideas for enlarging the house. They were already on friendly terms with architect Maxime-Alexis Frappier, whom they knew from their local skiers’ circle. Informal chats with Mr. Frappier – co-founder and president of Montreal-based firm ACDF Architecture – centred on how to find a practical but aesthetically pleasing solution to this problem of lack of space and intimacy.

Don’t make any major structural changes to the house, Mr. Frappier suggested. Instead, why not add a separate wing that is linked to the original building by a passageway of some kind?

“We thought at first we had some interesting architectural ideas,” Mr. Dubord said. “But we soon realized we didn’t have Maxime’s creative spirit.”

Mr. Frappier proposed an annex that pays tribute to the old house and its distinctive steep gabled tin roof while at the same time presenting a sleek, minimalist look. The new structure – with a sheet-metal roof – is set on a concrete pedestal at an angle to the old abode. A glassed-in bridge connects it to the original building.

The name “La petite soeur” refers to the kinship between the two structures: “Little Sister” and her older sibling.

The old house’s aging roof was kept, as was its original wood cladding. “We thought it had such a lovely patina,” Mr. Frappier said.

The whiteness of the new addition is a nod to the whitewashed walls of countryside barns and to the shiny bark of the many birch trees on the property.

As you enter the new section and stand in the foyer, you are immediately struck by the superb view of the lake through the generous floor-to-ceiling picture window at the far end of the open-plan living room. A second window that sets off the corner also serves as a cozy alcove, a built-in bench/storage space, on which to perch and take in the scenery.

A table with hanging light fixture is for snacking or playing board games.

The floor is heated polished concrete.

This light-flooded, high-ceilinged room – in marked contrast to the lower ceiling in the old part – is where the kids play games, stage disco-style dances, entertain friends and generally relax.

The fireplace is flanked by two enormous, hidden storage areas stuffed with board games and a sound system complete with vintage turntable.

The passageway, framed by a light-coloured oakwood trim, offers a view of the kitchen and dining area in the older house. The link’s floor and ceiling are also clad in oak wood. “Having a view from the kitchen on what’s going on in the living room was really important to me,” Ms. Guindon said.

The orangey hue of the wood frame, and of the corridor, are another nod to the surrounding birch trees – this time, to the inside of the bark, Mr. Frappier explains. They also offer a warm contrast to the stark white walls and concrete floor and echo the original pine planks on the ground floor of the old house, he said.

The goal was to create a separate, convivial area able to accommodate family, friends and relatives while at the same time not losing sight of its connection to the original space, Mr. Frappier said. There is, as well, an interesting contrast between the rustic – the pinewood floor and vintage Quebec furniture in the kitchen/dining area of the old house – and the contemporary, Ms. Guindon adds. “The new part gave the old one a second wind,” she said.

The corridor was conceived not only as a passageway but also as a spot to linger in. Its generous dimensions allow for that, with an Eames chair strategically placed as a comfy rest spot in front of the picture windows overlooking the lake. The corridor also serves as the ideal location for the Christmas tree.

In a corner of the fireplace wall of the new building is a stairway down to the parents’ sleeping quarters. Again, a commanding view of the lake, screened by trees, takes centre stage. “The new addition allowed us to capture new viewpoints on the lake,” Mr. Dubord said.

Another feature the couple appreciate in this cocoon of a space that offers a sense of intimacy and apartness from the rest of the house is the walk-in closet. Just off the master bedroom is the bathroom, with a glass door giving access onto a small deck and hot tub.

Taken as a whole, the combined effect of the two structures is one in which “two volumes speak to each other,” Mr. Frappier said. “It’s a nicely balanced place.”

Ms. Guindon is satisfied that the addition is not too extravagant or flashy. “Every day we’re here, we tell each other how good it feels,” she said.