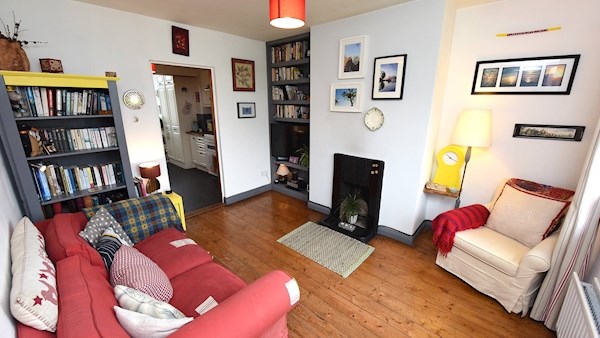 Tommy Barker gives the lowdown on this modest, but personality-packed, family home in Ballyphehane.

THERE’S personality galore packed into this cheerful, and cheering, young family home in Cork city’s southern suburbs. Some of it comes from a two-year old daughter, but there’s every chance she got some of her fizz and sparkle from the characterful and book-filled place that’s been her home to date.

The couple who’ve been here since 2008 are now selling, only because they’ve got a rare chance to build a brand new home near family in Midleton.

As they prepared to sell up, their hospitable home immediately put a smile on the face of the BER assessor, who raved about it as he measured and calculated (even if his BER rating of D1 is entirely objective!) The selling agent, auctioneer Jeremy Murphy’s delighted with what’s he got to sell, and was on to the Irish Examiner Property desk pretty hot-stitch, to flag its charms.

We concurred, well worth the visit, leaving with a pep in the step.

And, the professional photographer drafted in, Ted Murphy, clearly loved it too, getting over 60 bright and breezy digital images, inside and out, a pretty impressive tally, for a modest-sized suburban home, and even more so for one priced at €260,000.

Its owners both trained as archaeologoists, but subsequently followed different career paths; he’s now a national school teacher, relocated to Midleton, and she’s now a project manager with a professional services firm specialising in conservation of old, and some very old, buildings, from cathedrals to castles, and cottages.

By contrast, there was little to do here on their purchase back 11 years ago, bar stamp on their own personality and steadily fill its nooks, crannies and gardens.

Set by a quiet crescent corner, and facing a green, No 53 Lower Clarke Road is one of the quieter roads in Cork’s Ballyphehane (not one of the more trafficked through-roads,) named after the Irish patriot and Easter Rising main driver, Thomas James ‘Tom’ Clarke, executed by firing squad in May 1916.

Laid out as a ‘model community’ immediately after WW11, with up to a dozen planned estates and open green spaces encompassing some 1,300 homes delivered from 1948 by Cork’s local authority, many of Ballyphehane’s roads bear the names of ‘the Men of 1916,’ including Kent, MacDonagh, Pearse, Connolly and Clarke.

There’s a case, surely, for another Government drive now in the midst of a housing crisis to provide homes on a similar scale? Where’s Dev when you need him?

Not only was Tom Clarke in the GP0 in 1916, he had the honour of featuring on a 50th anniversary commemorative stamp in 1966, had a tower building in the capital called the Tom Clarke Block; the rail station in Dundalk also bears his name, as does a Tyrone GAA club. There’s even a tolled bridge in Dublin’s named in Clarke’s memory: it’s the East-Link bridge or… should that be Easter-link?

In contrast, Cork’s Lower Clarke Road has an almost laid-back vibe, in a long-established community that’s now into second generation occupancy and ownership, with a fair sprinkling of more recent arrivals, many rejuvenating it with young children, such as is the case at No 53.

No 53 has long views over the semi-circular green to the hills by Frankfield and Cork Airport, fringing the city’s outer reaches, and handily it’s within a walk of the city centre, as well as being on a bus route, with long-established services (and sports grounds) to hand.

And, thanks to its snug corner placing, No 53 has front, side and back gardens, with the rear an oasis in its own right, topped off by a outdoor cooking spot with BBQ, home-made pizza oven, and log store.

There’s been lots of planting too over a decade, with ash, laurel and forsythia to be admired, and raised veg and herb beds, in reused old scaffolding boards, while old scaffold boards also find their way inside for shelving….lot of shelving.

As the family prepare to uproot themselves, just one plant is going with them in the move to East Cork countryside, an apple tree in a pot that was a wedding gift, that they never quite got around to bedding down.

When they bought back in 2008, the previous owners who were moving to Australia had already extended No 53 to the back, with a bright extension with roof lights and glazed end wall overlooking the garden and patio, so the new owners made their own strong impact by decorating, and adding colour, some funky furniture, creating a den-like reading and music room, and packing it over time with things of visual and personal interest.

Apart from things of personal value, as they prepare now to decamp, they say furniture and fittings that are intrinsic to the ‘feel’ of the house, or which may just be admired/coveted by viewers, can be sold with the property.

First viewings are just being lined up by agent Jeremy Murphy, and he can expect a good cross section of interest, including from first-time buyers, returnees/relocaters to Cork, and quite possibly from some who’ve grown up locally here, or by the Lough, Turners Cross or UCC and who’ll appreciate the convenience. They’ll get a good house, too.

Both the road’s name, as gaeilge in grey and white as Bóthar Ó Cléirigh, and the house number 53 in colourful ceramic tiles, are up on the front wall of the c 1,005 sq ft dormer home, and once down the half dozen wide garden steps and past the grey-painted front door, it’s colour all the way, and with a lofty stairwell immediately encountered, full of hanging art and images.

Immediately to the left is a guest WC with shower, and right’s a welcoming, wood-floored living room, with simple, black painted and fluted steel fireplace, with a south-facing window, and a door ope to the kitchen behind, and then to the high-ceilinged dining/family area with full-on garden views.

Handily, there’s no lost corridor/hall space, and this airiness ‘out back’ is a nice contrast to a

further side end study/den, with its walls almost entirely shelf-lined and packed with books, LPs, and memorabilia, including a personal, almost curated, display of some of Cork’s nautical past, fostered due to a family merchant shipping link.

There’s also a ground floor family bathroom with bath and a tumbled marble floor, and that’s in addition to the guest WC’s shower, perhaps making up a bit for the fact ther’s no first floor bathroom, just three bedrooms, off a carpeted landing.

Even upstairs, the trio of bedrooms has personality, more sturdy painted shelves made from old scaffolding boards. Yep, construction sure went quiet for nearly a decade after they’d bought: plant and machinery got exported, and scaffolding got widely ‘repurposed,’ usually in gardens.

Two of the bedroom trio are good doubles, with feature, rustic built-in headboards, and the third, child’s room feels more dormer in character, facing the front and the green and, not surprisingly, even the two year old has her own bookshelves, with Thomas the Tank a current favourite.

For those ‘doing the books’ on a house purchase, the Property Price Register shows 177 sales in and around Ballyphehane, since 2011, and affordability as well as accessibility are obviously key attractions.

Best Feature: made a real home

Some great ideas for you to use in your home and where to get them.