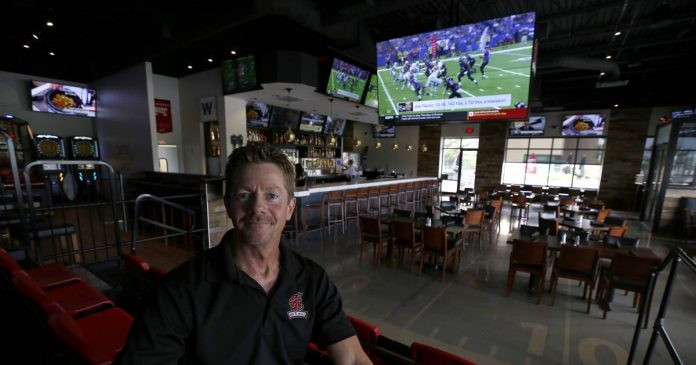 TJ’s Bar and Grill and Caffé Mariani Java and Gelato are in the same strip mall at 3145 W. Route 20, just east of Nesler Road.

TJ’s Bar and Grill owner Terry Diegel of Elgin said he wanted a sports bar that would cater to all sports fans and make everyone feel welcome, no matter their team. The sports bar opened Monday at 4:05 p.m. — just like a baseball game — after a two-week soft opening attended upon invitation by residents from nearby subdivisions.

The bar’s “very expensive” sound system allows patrons to use AudioFetch smartphone app and free Wi-Fi to connect to any of the 32 flat screen TVs and listen to games with their own earbuds — no matter which game is being broadcast over the main speakers, Diegel said. There are 30 to 40 USB outlets in the place so people don’t have to worry about running out of a charge, he added.

“I wanted to do something that sets us apart from any other bar, or sports bar, that I can think of,” Diegel said.

Another feature is a cluster of Wrigley Field replica seats facing a suspended TV wall. Groups can reserve the area and play their own music and videos on the TV wall via Apple TV, and the seats are retractable so the area can be turned into a small dance floor, Diegel said.

There also are gluten-free options at no upcharge, said Diegel, who adheres to a gluten-free diet that he said helped him overcome a health issue.

Diegel — who is involved in restaurants in Ohio, Florida and Colorado — said it took a few months longer than expected to open the Elgin sports bar, but the result is exactly when he envisioned. “I look around and I think, ‘This is great,'” he said.

Cassidy Manuel dishes up a scoop of sea salt caramel gelato Tuesday at Caffé Mariani Java and Gelato, which opened in late July in the strip mall at 3145 Route 20 in Elgin.
– Brian Hill | Staff Photographer

Caffé Mariani owner Randy Mariani said his vision was to have a place that would be inviting to the community, especially children. The eatery opened in late July.

“The main concept was, I love ice cream and gelato,” he said. “I wanted a place for kids to bike to or walk with their parents. I said, ‘Why not make a local place instead of everyone going to Randall Road?'”

The cafe offers coffee from Farmer Brothers Company, 12 flavors of ice cream from Chocolate Shoppe, based in Wisconsin, and 12 flavors of gelato made by the Italian company Bindi and distributed locally by Greco & Sons of Barlett, Mariani said. One of the business partners who built the strip mall is Ed Greco.

There also are salads, soups and sandwiches made by Cafe Roma in Elgin, and a variety of packaged desserts — brownies, cookies and more — made by local vendors, with gluten-free and vegan options, he said.

“I wanted to make things nice and simple for my cafe. I didn’t want my (employee) kids to have to make anything,” he said.

Mariani said he’s owned V.I.P. Valet Services, a valet parking company, for 23 years. He and his wife Lisa decided “it would be great for us, as we get older, to start another business.”

The couple live with their three children in Plato Center, about five minutes from the cafe. “It’s exactly what we were looking for, in terms of a community neighborhood feeling.”