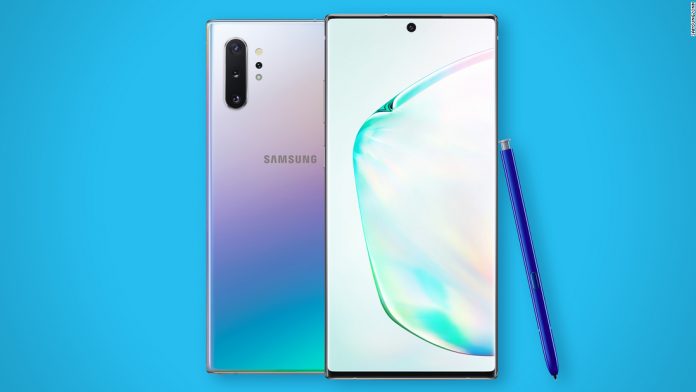 In a major design overhaul, Samsung is now removing the headphone jack from its newly-announced Galaxy Note10 smartphones, a niche line that largely appeals to professional power users and creative types due to its large size and Bluetooth stylus. Samsung’s Galaxy phones were among only a handful of devices to still include a 3.5mm audio port. Now its user base will now be pushed to adopt Bluetooth wireless headphones, use the USB-C headphones included in the box, or opt for a much-maligned dongle to make old headphones compatible, whether they like it or not.

At an event held in Brooklyn, New York, on Wednesday, the company showed off the Note10, Note10+ and the Note10 5G — a lineup packed with super fast charging, a redesigned S Pen stylus, hand-gesture commands and a ton of fun features added to the camera.
Samsung (SSNLF) is looking to drum up excitement for the Note10 following tepid demand for its flagship devices and an overall slowdown in the premium market. The Note line makes up only a small percentage of Samsung’s overall sales each year, compared to its flagship Galaxy S devices.

The devices come in assorted colors including white, black, a pink-to-blue ombre “glow,” and, at Best Buy stores in the US only for the 10+ model, blue. The smartphones are available for pre-order starting Thursday at 12:01 a.m. ET and for purchase in stores and online starting August 23.

The larger models feature the biggest display on the device yet. The company achieved this by drastically reducing bezels — the frame around a device’s display — to create more screen real estate without increasing the size of the smartphone. The removal of the headphone jack helps with this, too. For headphone traditionalists, Note10 smartphones come with a wired pair that plug into its USB-C port. A dongle for 3.5mm earbuds can be purchased separately for $10.

In a press briefing ahead of the event, Samsung declined to share whether the next-generation Samsung Galaxy S smartphone, which typically launches in February, would forgo a headphone headjack as well. However, we wouldn’t be surprised if the company kept the design decision consistent across its smartphone offerings.

We received an early look at the new line and its features. Here’s what to expect:

On first impression, the updated Bluetooth stylus “S Pen,” one of the biggest draws for the Note, is more ergonomic and fits better in the hand. Among its best new features is its handwriting-to-text tool that was able to instantly convert even our sloppiest scribbles to text and works with 62 languages.

The S Pen’s new Air gestures feature turns it into a remote control, allowing you to scroll through features on the camera by waving the pen and pressing its button, without ever touching the screen. Developers will be able to build this feature into apps and games, too. We immediately thought of a wand for, say, a Harry Potter smartphone game.

Samsung, long known for top-tier smartphone cameras, put four lenses on the Note10 — three on the back (an ultra wide, a wide-angle and a telephoto) and one on the front — and an extra depth-vision lens on the Note10+ and Note 5G.

It’s also doubling down on new features to improve photos and videos. Live Focus Video lets users add depth-of-field adjustments such as blurring the background to focus on a subject, and a zoom-in mic feature amplifies the audio in the frame. This means, for example, you could pinch-to-zoom into that band playing in the background of your shot to better hear a song. Other improved tools include stabilization, night mode, video editing directly via the S Pen and a screen recorder.

Perhaps the star of the camera’s new features, however, is AR Doodle, which lets you draw or add animated effects to videos and photos. (Think Instagram Stories.) In an early demo, we drew hearts, cat whiskers and a hat over a front-facing video that tracked as our face moved. Meanwhile, its new 3D Scanner feature could be useful for, say, scanning a chair in a furniture store and going home to see how it’d fit in your living room.

Microsoft CEO Satya Nadella appeared on stage to detail a partnership between the two companies. Samsung Note10 users will be able to access notes, texts and phone calls directly from their computers running Windows — similar to how Messages currently works on Mac computers.

Samsung is also enhancing some multitasking tools to make it easier to work on both PCs and Macs. By connecting a USB cord to a Note10 phone, users will be able to drag and drop files, such as photos, in between the devices.

Although most users would prefer longer-lasting battery life, a 30 minute charge on the Note10+ can now give the device enough fuel to get you through the day. Like its Galaxy S line, the Note now has a shared battery feature, so you can give power to a friend by resting their Qi-enabled device on top of yours.

Samsung’s decision to offer a 5G model was expected; the company continues to grow its reputation as the most aggressive brand in the US to roll out support for the next-generation of cellular technology. Considering how innovation has largely stalled across the smartphone industry — with the exception of some bold moves led by Samsung — the company is among the earliest to offer at look into the future of what our phones will be able to do, such as downloading entire TV seasons in seconds. But for now, 5G networks are limited to a handful of city blocks — and service is still spotty.
Some early testers of Samsung’s other 5G smartphone, the Galaxy S 5G, reportedly experienced overheating issues when the devices reached a certain temperature. For the Note10 5G, Samsung is adding a slimmer vapor cooling system to help cut down on this.

Despite these hiccups, Samsung is solidifying itself as an early leader in 5G devices and hopes some of its user base will bite. “With Apple not expected to launch 5G iPhones until September 2020, Samsung could well have at least another two updates to its 5G flagship smartphones, if not more models, in the US market by then,” said David McQueen, research director at ABI Research.

For those who live in a location with working 5G networks and aren’t likely to upgrade their smartphone again for a few years, the Note10 5G could be a compelling option — the networks will likely have worked out most kinks by the time the standard three-year phone upgrade cycle comes along.

The company also showed off an unexpected product, the Samsung Book S — a slim smartphone-inspired touchscreen laptop. The device, which starts at $999 and launches in September, runs Windows 10 and features a battery that lasts 23 hours.