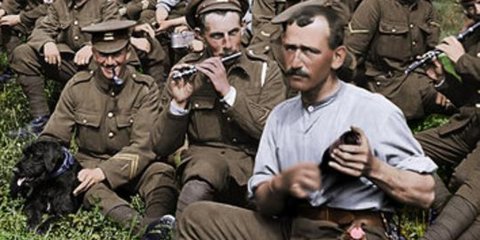 While there is plenty of video footage captured of World War II, represented in a whole slew of documentaries and TV shows, you won’t find much to watch on the world war that happened a mere two decades prior — World War I.

Peter Jackson, the director we all know most famously from “The Lord of the Rings” movie series, realized the void in telling the story of World War I and brought it back to the surface with “They Shall Not Grow Old.”

Read more: Only 9 movies received a perfect score on Rotten Tomatoes this year — here they are

The documentary, produced and directed by Jackson, worked with about 100 hours of film archived by Britain’s Imperial War Museums, along with 600 hours of audio from interviews conducted with veterans of the war, and whittled them down to a fascinating telling of what it was like to be a British soldier fighting on the Western Front. A daunting task in itself, that isn’t even the most impressive part. The majority of this doc is presented in glorious color and 24 frames per second. On top of that, sound effects were recorded for an even more immersive experience, since recordings were silent in the times of the war.

Before we go any further, watch the trailer here:

At some point at the beginning of the film, the standard “old-timey” footage goes from that jittery, black and white that we associate with old war footage, and transforms before your eyes in a true “Wizard of Oz” moment. (I think I audibly gasped “Wow!” when I watched it in the theater.)

The result of being able to sharpen, clean up, stabilize, color, and bring the footage to 24 frames per second (a standard for lots of filming nowadays — which gives that cinematic and more realistic speed to movement) suddenly humanizes World War I. This alone, aside from the incredible storytelling we receive from the interview audio and added sound effects, reminds us that these soldiers were just like you and me, for the fact that we see them in full color and at a more natural-looking speed. Cameras at the time were hand-cranked, which is why you often see people walking in old footage at unnatural, varying speeds.

Read more: The 18 best movies of 2018 that you absolutely need to see

If you get the chance to see “They Shall Not Grow Old” in theaters, do it. There are limited screenings in the US. If you stay after the credits, you can watch Peter Jackson show his audience a fascinating breakdown of some of the behind-the-scenes of the restoration process.

With the most dramatic transformation being from black and white to color, Stereo D, a company that focuses on turning 2D movies into 3D, was brought in to help with the restoring and coloring process, using a process called rotoscoping amongst other software. Peter Jackson, who dedicated the project to his grandfather, a veteran of the war, came to the rescue with his impressive World War I collection. This included actual uniforms that were referenced for the accurate coloring of the uniforms in the doc.

He also had a collection of World War I weapons (“as one does,” Jackson quipped in the behind-the-scenes portion). This allowed for accurate sound to be recorded, such as the firing of mortars. Whenever soldiers were seen talking in the footage, actors were hired to read what was best-guessed as to what was said, with the help of professional lip readers.

Jackson also mentioned in the post-credit section that he didn’t want this to be a typical history lesson of the war, but simply a telling from the soldiers’ perspectives. This lead to the decision not to narrate the film themselves, but to use the audio recordings from the interviews with veterans to drive the storytelling. What culminates is an emotional ride filled with horror and despair, but also humility and even humor. It’s worth a watch, and I hope it sparks more film projects to shed a light of a war less told.

Watch some more behind the scenes here: