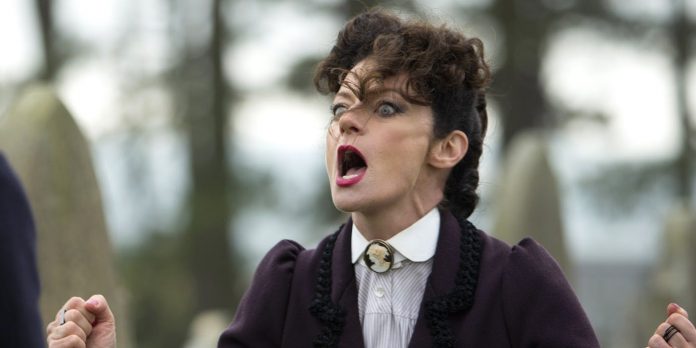 The 1996 Doctor Who television movie remains an intriguing footnote in the history of the franchise, bridging the gap between Classic and New Who without capturing the tone of either. Still, the movie gave us Paul McGann’s Eighth Doctor, who has become the star of many official audio dramas from Big Finish, as well as a cameo appearance in a recent Doctor Who season. This October will see the release of the new audio drama Ravenous 4, which will pit McGann against not one but four Masters in a conclusion to the Ravenous series that kicked off in April 2018.

This fascinating premise will feature Geoffrey Beever’s old-school Master, Derek Jacobi’s War Master, Michelle Gomez’s Missy, and in his first reappearance since Doctor Who: The Movie, Eric Roberts’ version of the character. The multi-Master idea, teased to an extent in the recent series with Gomez and John Simm, has echoes of the many successful episodes with different Doctors joining forces.

Other returning characters from Big Finish’s audio universe include murderous Time Lord the Eleven (Mark Bonnar), and companion Helen Sinclair (Hattie Morahan). Matt Fitton and John Dorney are providing scripts, and the latter has acknowledged the “heart-stoppingly fantastic prospect of bringing Eric Roberts’ Master back face to face with the Doctor again for the first time in over 20 years” as well, saying:

“Honestly it was one of the best times I’ve ever had writing a Doctor Who story. I really hope the audience enjoy it as much as I did!”

This isn’t the first time that Roberts has reprised his role as The Master, however, with Ravenous following a recent appearance in audio anthology The Diary of River Song: Series Five. References to the McGann-era Master have also occasionally appeared in comic books and original novels. Jodie Whittaker’s Doctor has yet to face the villain in any form, although Michelle Gomez has shown interest in reprising her character in new episodes.

For anyone not familiar with the Big Finish audio dramas, they’re a great outlet for Doctor Who, particularly given their budget freedoms and ability to rope in actors to reprise their on-screen roles. With new episodes of the current TV series possibly not happening until 2020, give or take a rumored Christmas special, Ravenous gives us a welcome deep-dive into Who mythology.