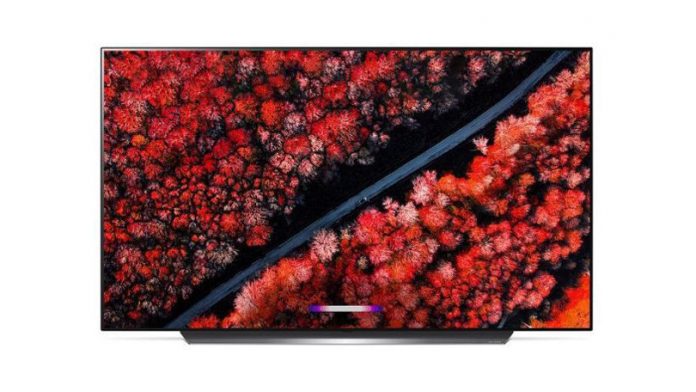 Organic light-emitting diode (OLED) TVs are some of the best you can buy, in both style and performance. The technology enables the panels to be incredibly thin while producing perfect black levels and a wide range of color. It’s also very expensive, which is why even LG’s “lower-end” OLEDC9P line costs more than its flagship Super UHD LCD TVs. The 65-inch OLEDC9P we tested goes for $3,499.99, so it’s not for budget-minded buyers. That said, it’s the most affordable OLED TV we’ve seen, and it offers one of the best pictures you can get, earning it our Editors’ Choice.

The C9P is one of LG’s most simply and conventionally designed OLED TVs, but it still looks attractive thanks to its completely bezel-less design. The entire front of the TV is simply a pane of glass containing the OLED panel, with a flush black border measuring only 0.3 inches between the active part of the screen and the edge. The panel is framed by a tiny strip of rounded gunmetal aluminum, too small to be seen against the border of the screen unless you get very close to the TV. The back of the C9P is brushed gunmetal aluminum, providing some support structure to the OLED panel while keeping it only a tenth of an inch thick (not too much support; be very careful when setting up the TV because the bezel-less design makes it vulnerable to bending when you pick it up).

The lower half of the C9P bulges out another 1.7 inches in the middle to accommodate the plastic enclosure that holds all of the TV’s electronics besides the OLED panel. Aside from the power connector on the right side, all ports sit on the left side of the back of the TV in two recesses. Three HDMI ports and a USB port face left in the leftmost recess. A fourth HDMI port, two USB ports, an Ethernet port, an antenna/cable connector, an optical audio output, and 3.5mm ports for audio, composite video, and RS-232C control systems face directly back in the second recess.

The included Magic Remote is now-standard LG fare for its smart TVs. It’s a curved, glossy black plastic wand covered in buttons and dominated by a circular navigation pad with a clickable scroll wheel in the middle. A number pad and volume and channel rockers sit above the navigation pad, while simple playback controls and dedicated service buttons for Amazon Prime Video and Netflix sit below it. A pinhole microphone near the top lets you use the TV’s voice search and Google Assistant. And, like all Magic Remotes, this one also serves as an air mouse for controlling an on-screen pointer.

LG’s WebOS smart TV platform powers the C9P’s features and apps. It’s a functional, easy-to-use interface that arranges your most common content, whether apps, channels (live TV or even YouTube channels), or inputs, in a row of parallelograms that pop up on the bottom of the screen. It’s an attractive menu system that’s easy to customize.

Most major streaming services are here, including Amazon Prime Video, Google Play Movies & TV, Hulu, Netflix, Sling TV, and YouTube for video and iHeartRadio, SiriusXM, and Spotify for music. It isn’t the biggest selection, and the hundred-odd entertainment apps don’t go nearly into the regional or topic-focused niches that the thousands of apps on more open smart TV platforms like Roku TV and Amazon Fire TV go into.

It incorporates Google Assistant on top of LG’s own voice-based content search, so you can speak into the remote to get the same information and smart home control features you would find on a Google Home. This isn’t an Android TV or Google Cast device, though, and for most media-based voice assistant features the TV uses LG’s WebOS-based service first. Alexa is also planned to be added as an option to WebOS later this month, letting you choose which major voice assistant you want to use with the TV.

WebOS has several built-in features outside of streaming apps. A channel guide shows you what’s on TV, either OTA with an antenna or cable or satellite with a connected box. The LG Channels feature adds free streaming Internet TV channels like Shout! TV and Mashable, all of which can be integrated into the guide alongside the conventional channels. A web browser loads websites on the TV, and is fairly easy to use thanks to the air mouse function of the Magic Remote. The C9P also supports screen sharing over Miracast, and offers a Gallery mode that rotates works of art or photos on the screen.

We test TVs using a Klein K-10A colorimeter, a Murideo SIX-G signal generator, and Portrait Displays’ CalMAN software with testing methodology based on Imaging Science Foundation’s calibration techniques. The C9P shows excellent contrast and color range, unsurprising considering the TV’s OLED panel and premium price. In Technicolor (Expert) picture mode using an 18-percent white field, the TV shows a peak brightness of 667.89cd/m2. This is slightly brighter than the LG OLEDE9P (633.56cd/m2), which uses the same OLED panel as the C9P, but not so much brighter that slight variation can’t account for it.

Both TVs are quite bright for OLEDs, though they can’t reach the blazing brightness of high-end LED-backlit LCD TVs like the Sony Master Series Z9F and its 1,677.49cd/m2 peak brightness with the same 18-percent field. Of course, LCDs still can’t reach the perfect black levels of either OLED TV, which give both the C9P and E9P “infinite” contrast.

The C9P’s colors are very impressive, but not perfect. The above chart shows DCI-P3 color levels as boxes and measured color levels out of the box, in the TV’s Technicolor (Expert) picture mode, as dots. The TV shows a very wide range of color, covering 93.4 percent of the DCI-P3 color space. However, whites run a bit cool, pulling yellows a bit toward green and magentas a bit toward blue. It isn’t nearly as accurate as the Samsung Q9FN, which still impresses us with its color performance.

Professional calibration can be an expensive service, often running a few hundred dollars, but we recommend it for users willing to spend several thousand dollars on their TV. The LG C9P (and E9P, which shows nearly identical color performance) supports CalMan’s AutoCal feature, which automates the calibration process to make far more individual adjustments in minutes rather than hours. It probably won’t make the service much cheaper, since it requires expensive equipment and software, but it will make the calibration much faster and convenient.

Unsurprisingly, the C9P’s excellent contrast and strong color performance make an excellent picture. BBC’s Planet Earth II looks excellent on the OLED panel. The greens of plants and blues of water in the “Islands” episode look vivid and natural, though the slightly cool colors of the TV out of the box are a bit apparent in the whites and grays of sloth fur and tree bark. They don’t look overly blue or otherwise distractingly inaccurate, just a touch cooler than TVs like the Q9FN and Z9F. Details in both bright sunlight and shade come through clearly, with fine textures easily discernible in dark parts of the frame without appearing remotely faded or washed-out. Even cheetah fur backlit by the sun, which normally would be almost invisible or blown out with overcompensation, can be seen clearly against the bright light behind it.

Deadpool also looks very good on the C9P. While the TV’s whites are slightly cool, its reds hit the DCI-P3 color value spot-on, which makes Deadpool’s red costume look balanced and well-saturated even under the overcast lighting of the opening scene. The burning lab fight is also full of detail, even in the very dark shadows cast by the bright oranges and yellows of the flames.

The Great Gatsby really stands out on the C9P thanks to its superlative contrast. In the party scenes, the whites of the lights, balloons, and shirts look bright and neutral while fine details like the cuts and textures of black suits in the same frame come through clearly. Skin tones appear natural, if very slightly cool at times. Throughout the scenes, dark blacks never look muddy or washed-out, and bright whites never clip or lose any contours in the highlights.

Input lag is the amount of time between when a TV receives a signal and the screen updates. Using the HDFury 4K Diva 18Gbps HDMI matrix’s lag tester, the OLED65C9P shows an extremely high input lag of 92.2 milliseconds in Technicolor (Expert) picture mode. However, switching to the Game picture mode and disabling the Super Resolution feature improves input lag at the slight expense of picture quality, dropping that number to an extremely low 13.5ms. That easily puts it under our 20ms threshold to consider the C9P one of the best TVs for gaming.

LG’s OLEDC9P series of OLED TVs offer a fantastic picture in an incredibly slim frame. It’s hardly surprising, considering LG’s OLEDs consistently impress us with their performance year after year. It doesn’t have the most accurate color out of the box, and is pricey enough that we’d recommend a professional calibration if you plan to make such an expensive investment for your home theater, but even untouched it looks excellent and shows some of the best contrast you can find in a consumer TV. If money is no object and your first priority is picture quality, it’s an excellent choice.

LG’s other OLED TVs use very similar panels to the C9P, and based on the OLED65E9PUA we tested, don’t offer any significant improvement in picture quality. For these models, you’re paying extra primarily for the industrial design, like an additional $800 for the floating glass look of the 65-inch OLED65E9PUA and several thousand more for the ultra-thin panel-only design and single-wire-attached Dolby Atmos soundbar for the Signature OLEDW9P series (the latest version of the LG Signature OLEDW7P TV we tested two years ago).

When it comes to just picture quality and features, the C9P line stands alongside its more expensive siblings, and is our Editors’ Choice for high-end TVs. If you’re not quite ready to spend multiple thousands on a new TV, the TCL 6-Series remains our favorite budget model, with a 65-inch version available for less than $1,000. You won’t get the superlative contrast or ultra-thin design you get with an OLED panel (or Google Assistant), but you’ll spend much, much less.