Amongst foreign brands, there has been a three-way fight in the Indian television market for a while now. Samsung, Sony and LG have been slugging it out for supremacy by upping their game in various aspects of a TV. For the last few years, this fight is taking place in the display arena.

LG has done a commendable job in keeping up with the times given its advancement with OLED displays. From time to time we do see the South Korean firm boasting new tech with OLED screen, the newest one being 8K and flexible OLED-featuring TVs but for now, you have other premium TVs coming to India. The
newest one in the 25-TV line-up is the C8 ThinQ model that launched in India a few weeks ago.

This new large-screen canvas is not for everyone as it costs Rs 2,64,990. The premium TV is LG’s ‘Signature’ model in the world of OLEDs. It is claimed to have all the features in place along with the required great viewing experience that comes courtesy of some in-house tech. We have been testing the LG OLED C8 ThinQ model since past few days and have played everything from 4K content to HDR videos and more. Here’s our take on it. 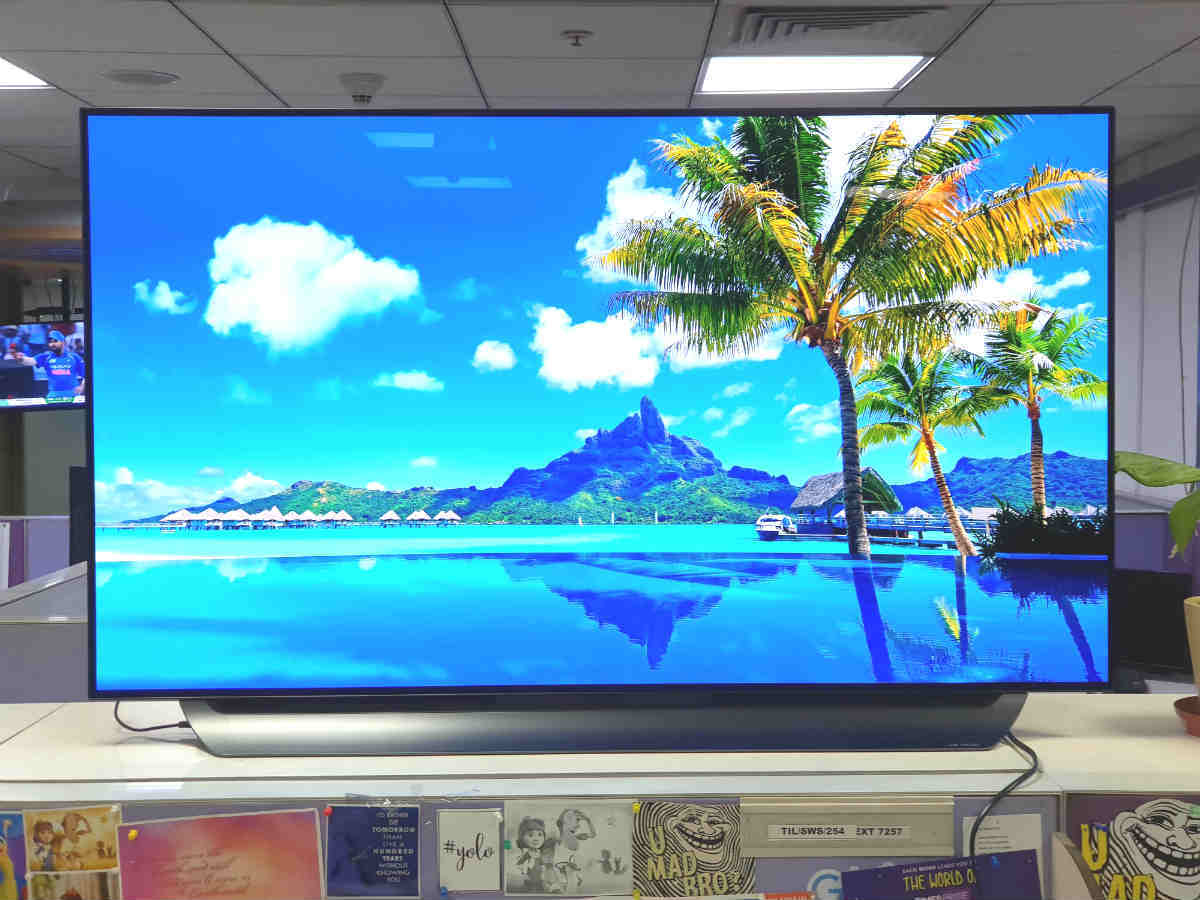 LG is quite there when it comes to design. The overall footprint of the premium TVs it brings to the market is minimal and sets a benchmark in its own sense. The screen is as thick as two-three coins, so installing it anywhere in your house shouldn’t be an issue. The lower half at the back, however, is thick and houses all the processing components along with a substrate of terminals. Though it does look good no matter from whatever angle you see.

The slim display is supported by a stand (it can also be wall mounted), which has a smooth curved look with metal coating at the front. There’s nothing new or interesting in terms of design from the back though.

The speakers are not visible right away. However, on closer inspection you could feel the tweeters and the sub-woofers placed at the bottom side of the screen right where the stand is. The outward curve design of the stand helps throw the sound towards the viewer, something which is a clever take by LG. 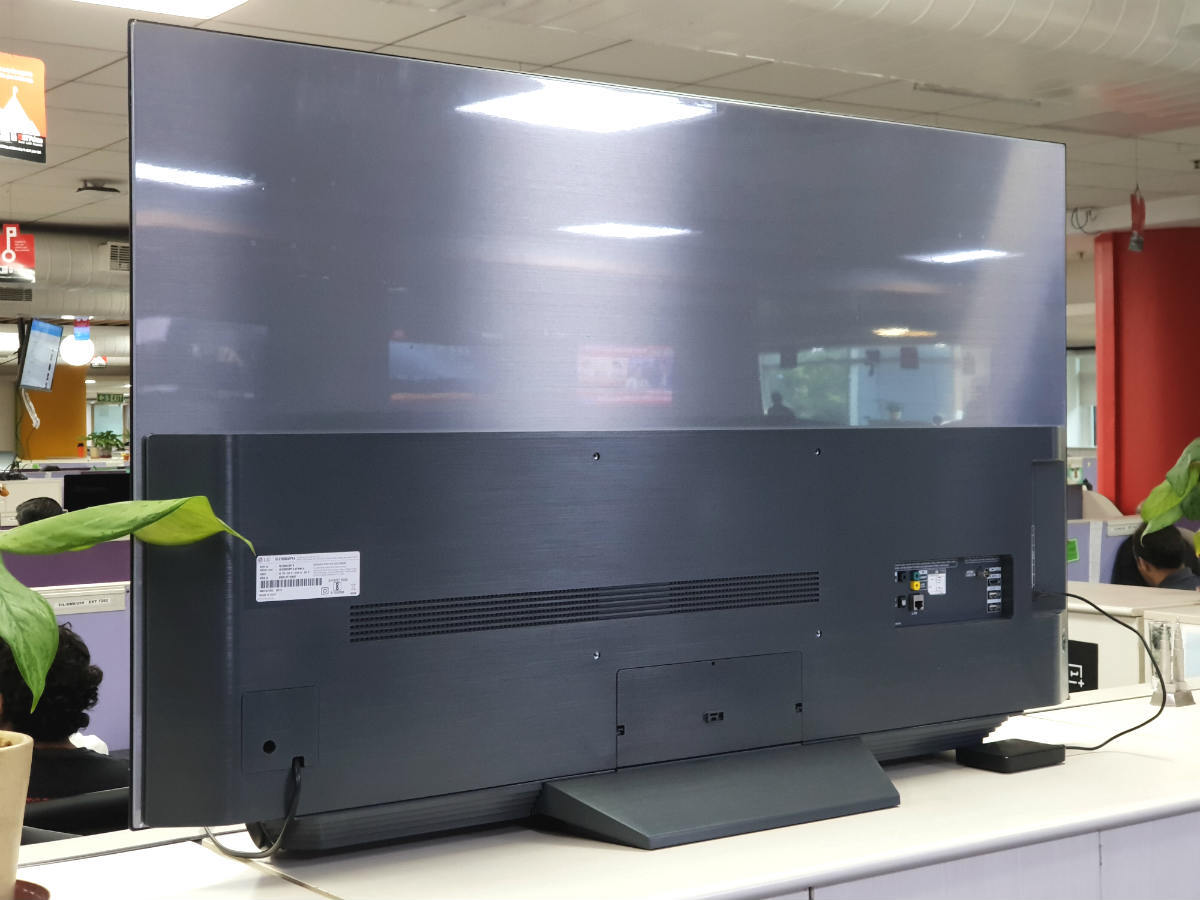 Although this overall design approach is not something we have seen for the first time, it still brings the ‘new’ element to it. However, one of the downsides here is that the ports are the back so in tight spaces, it may be difficult to reach them. Nonetheless, the TV does flaunt a modern look and may blend well in a room. But then don’t expect it to be a show stopper or the most attention-grabbing piece of machinery except for its slimness.

LG is known for its OLED screens and its newest display technology can be seen in the C8 ThinQ. The TV has a 55-inch canvas that packs 3840 x 2160 (UHD) resolution and is a delight to look at. Of course you will see a difference while placing it up against that of the premium Sony or Samsung TVs. However, LG seems to have done a commendable job with OLEDs, especially when it comes to TVs. Undoubtedly, it is one of the most competitive displays in the market. We found the colour vibrancy and sharpness quite impressive.

The viewing angles were good as there’s no shift in colour tones when seen from the sides. We played everything from 4K to 60fps HDR movies, all of which were handled well by the A9 Intelligent processor without any frame rate dropping. The 4K upscaler does a satisfactory job in expanding the content to fit inside the canvas. The sharpness may get a minor hit to a certain level but then that’s a natural drawback to expect.

In addition to 4K Active HDR ability, LG C8 ThinQ also comes with some inbuilt software tweaks for those who like to have a ‘different’ viewing experience. This includes a range of Picture Modes including Vivid, Standard, APS, Cinema, Cricket, Game, Photo, HDR Effect and more. It supports different aspect ratios as well. 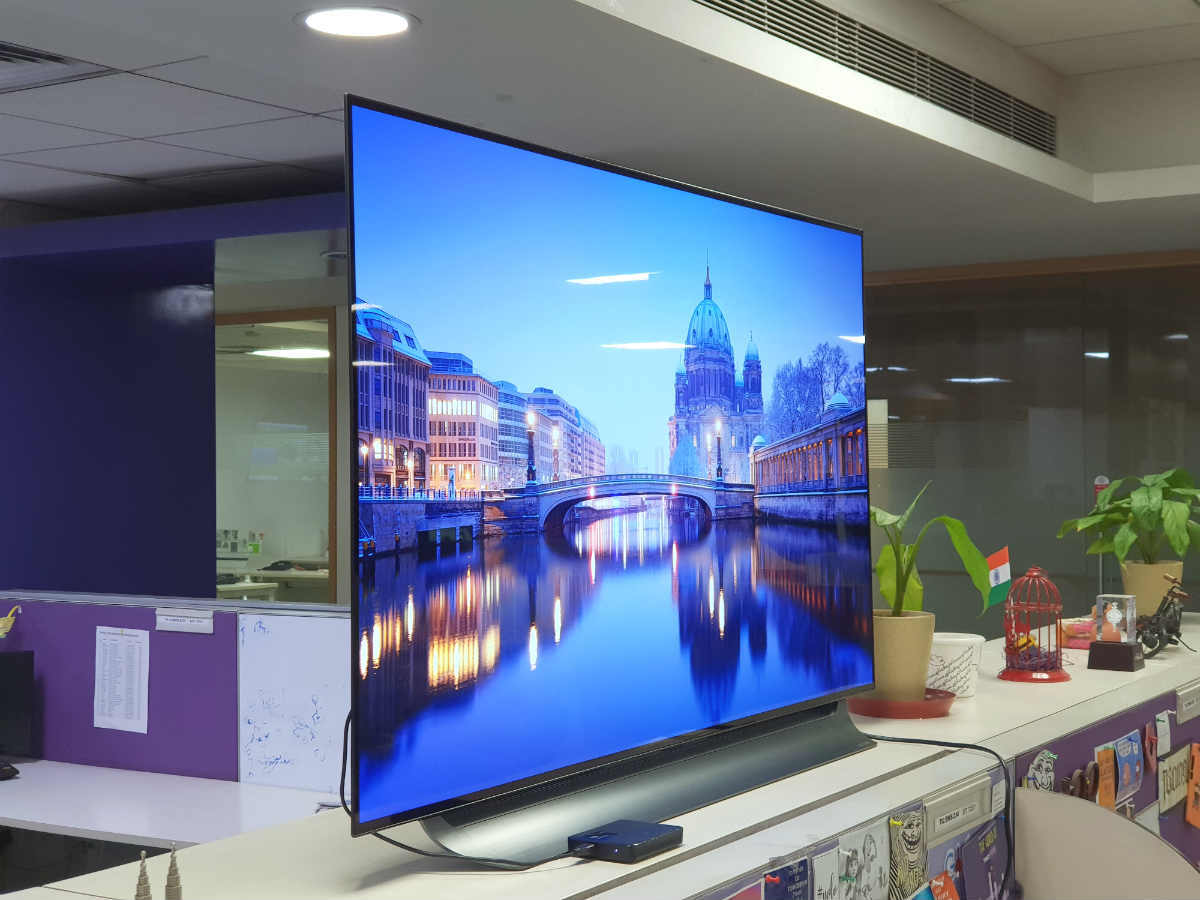 The artificial intelligence side of things kicks in when you start giving voice commands to navigate through the UI and search for content online. The AI ThinQ includes Natural language processing and launches certain apps seamlessly. Of course you would require the remote control, which has an inbuilt microphone, to give voice commands. It is even possible to connect the smart TV with your Android handset to search for images you clicked of a particular venue. Using voice controls you can jump between channels as well, all of which make it easier to control what’s happening on the large screen. Naturally, this would take some time to get used to but it sure makes your life easier.

LG claims the TV can carry out over 800 voice commands without internet connectivity. Although we didn’t try all of them, we can confirm that it does work offline given the commands you say are very basic. Also, with internet connectivity, the LG OLED TV supports fixed voice commands so the flexibility of saying almost anything and getting a reply is not there. But then the general AI limitations are still there and we are yet to see an AI that is as good as ‘VIKI’ that we saw in the iRobot movie, only in a friendly and helpful version. Nonetheless, what LG has done is not bad at all. 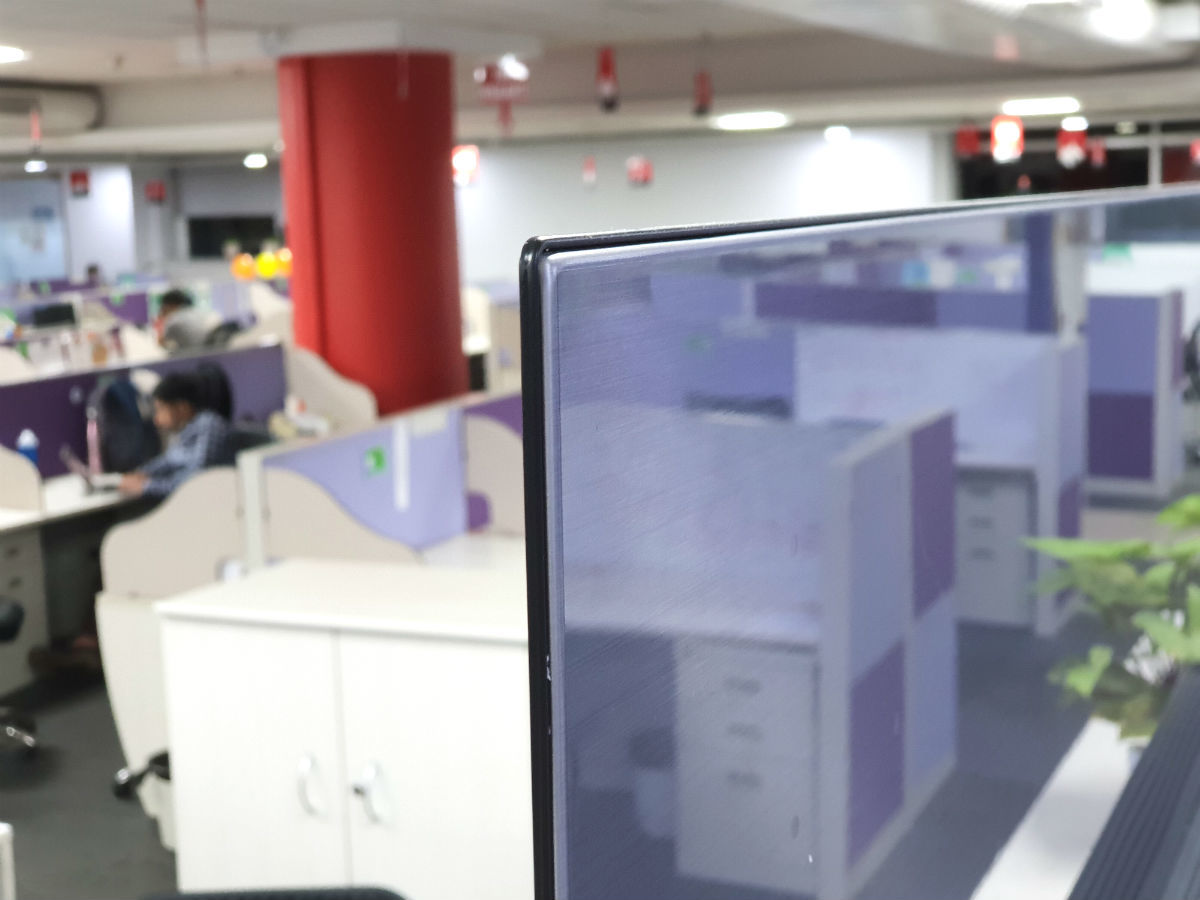 While the OLED screen performance is worth it, what adds to the experience is the Dolby Atmos support and 2.2channel speaker with inbuilt subwoofers and 40W audio output. We could feel the bass and the required punch while watching movies on the LG C8 ThinQ. Although you can connect a soundbar to it as well, the inbuilt audio mechanism should also be enough to fill your room with the powerful audio performance. We were not disappointed.

Few nifty features are also there in the LG C8. We found features like external HDD recording, air remote pointer, direct controls to fire up Netflix and Amazon, scheduled recording among others really useful.

All in all, the LG C8 ThinQ is one of the good AI-based TVs out there if you compare it with those coming from Samsung or Sony. The balance made with the picture quality, audio quality, the design, WebOS UI and artificial intelligence is well appreciated. This is quite unlike others that often have a slightly heavy focus on one of these four pillars. 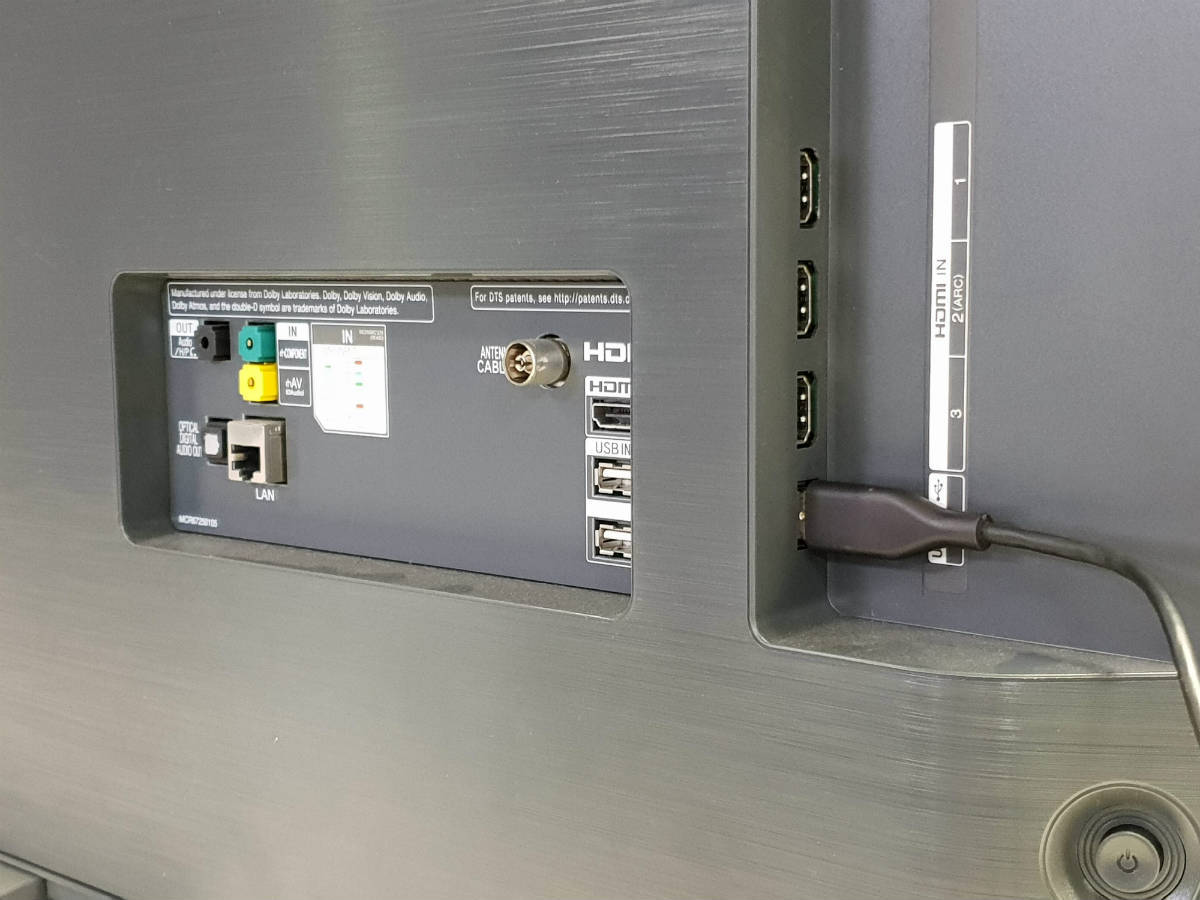 As funny as it may sound, we do like the WebOS as we feel it is one of the better UIs if you compare it with TVs who use their own skins. The video output is good and the audio complements the overall viewing experience. If you compare it with other OLED or AMOLED screens, the LG C8 is competitive and something you may not want to ignore. It also looks elegant and blends with the room aesthetics. There’s no radical new design but then it does look premium like it should.

The best part here is probably the pricing for the LG OLED C8 ThinQ. If you want the latest 4K HDR TV that has all the high-end specs under the hood, it would cost you over Rs 3.5 lakhs but then LG C8 is priced at Rs 2,64,990 and has nearly everything a user needs to get a good viewing experience with all the features and good looks.