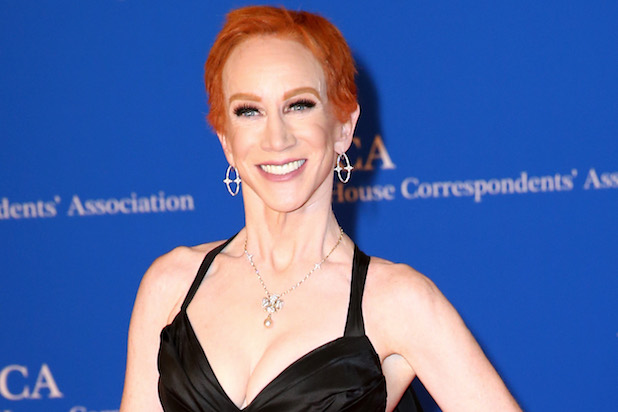 Kathy Griffin went at NRA TV with both barrels on Tuesday, calling out the channel for attempting to paint her as a supporter of President Trump’s strategy.

In a tweet, Griffin called out the station as “stupid and embarrassing,” and noting that the footage used in a promo clip for NRA TV’s “We Stand” was pulled from a video made by YouTuber Shane Dawson.

“You guys are so stupid and embarrassing @NRATV ….look @shanedawson they’re using footage from your video,” Griffin wrote. “See the original video here.”

The video clip, posted to NRA TV’s Twitter account Tuesday afternoon, was accompanied by the message, “#BREAKING: In order to keep herself and her home safe, @kathygriffin has adopted @realDonaldTrump’s Make America Safe Again strategy of #BuildTheWall. @dbongino covers the development tonight on We Stand. “

Also Read: Kathy Griffin Hit With Invasion of Privacy Lawsuit by Her Neighbors

Griffin is famously not a fan of Trump. Last year, the comedian came under considerable heat for posing with what appeared to be the decapitated head of the president.

In Dawson’s video, which chronicled a tour of Griffin’s home with Dawson’s mother, Griffin noted, “I have a neighbor on this side,” who, she said, has taken to screaming insults such as “f—ing d-ke” and “f—ing c–t” since the publication of the Trump photo.

“As Trump would say, we built the wall,” Griffin said in the video. “I’m not a Trump supporter, but we built a wall.”

Griffin was presumably referring to KB Home CEO Jeffrey T. Mezger, who last year was purportedly heard calling Griffin a “f-king bald dyke” and a “c-t” in audio published by the Huffington Post.

KB Home subsequently said in a statement that Mezger apologized “for the language that he used,” which “does not reflect who he is or what he believes.”

Even so, the neighborly tensions between Griffin and Mezger took another turn last week, when Mezger and his wife Sandra filed a lawsuit against Griffin and her boyfriend Randy Bick, alleging that lodged a series of noise complaints against the Mezgers, and “illegally captured hundreds of hours of audio and video from the Mezgers’ back yard” via a “campaign of secret electronic surveillance and recording “

#BREAKING: In order to keep herself and her home safe, @kathygriffin has adopted @realDonaldTrump‘s Make America Safe Again strategy of #BuildTheWall. @dbongino covers the development tonight on We Stand. Watch live at 4:30 CT/ 5:30 ET. #MAGA pic.twitter.com/WXEFqJWYHE

Since the election, several celebrities have voiced their displeasure — even anger — with the Trump administration. Some have gone so far as to suggest violent measures. From Robert De Niro to Snoop Dogg, here are nine left-leaning noteworthy people who have fanned themes of violence toward Trump and the GOP.