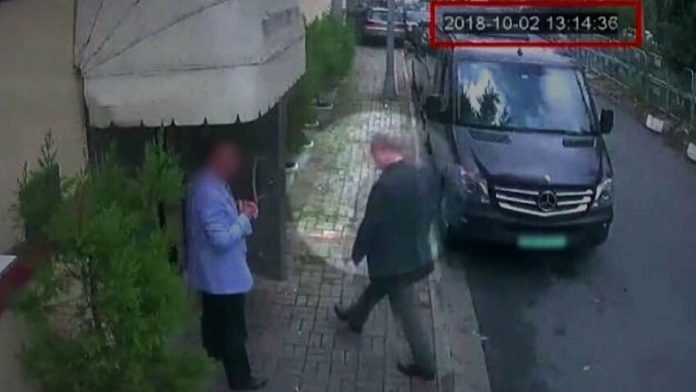 Saudi Arabia has admitted the death of missing Saudi journalist and Washington Post columnist Jamal Khashoggi, claiming he died in a fistfight involving more than a dozen Saudi officials at the country’s consulate in Istanbul.

After 18 days in which it insisted it had no involvement in the journalist’s disappearance, Riyadh asserted that Khashoggi died as a result of the altercation after he had come to the consulate to obtain paperwork needed for his forthcoming wedding.

An announcement carried on Saudi state TV said discussions between Khashoggi and officials at the consulate quickly turned violent, and ended in his death. Those responsible then tried to cover it up, a Saudi statement said.

A source with close connections to the Saudi royal palace told CNN that, in the Saudis’ determination, Khashoggi’s cause of death was a chokehold or strangulation, but officials provided no evidence to support the conclusion. Turkish officials privately say Khashoggi was dismembered, but his remains have not yet been found.

Saudi Arabian authorities announced a purge of officials, the detention of 18 people and an overhaul of the intelligence services headed by the country’s de facto ruler, Crown Prince Mohammed bin Salman — whom US officials privately believe must have been aware of the operation to target Khashoggi.

The question is whether Riyadh’s final explanation for Khashoggi’s demise is enough for the international community to move on from the grisly episode.

US President Donald Trump indicated he believed it was credible, but emphasized that the US had not yet completed its review of the Saudi investigation.

UN Secretary-General Antonio Guterres was “deeply troubled” by the explanation, his spokesman said.

Some members of the US Congress, who have the power to force the administration’s hand on foreign policy, were derisive. “To say that I am skeptical of the new Saudi narrative about Mr. Khashoggi is an understatement,” South Carolina Sen. Lindsey Graham, a Republican, said on Twitter.

The Saudi statement was the first official confirmation that Khashoggi died at the country’s consulate in Istanbul nearly three weeks ago, and the first acknowledgment by Saudi Arabia of its role in it.

Khashoggi disappeared after entering the building at about 1:15 p.m. on October 2 to obtain paperwork that would have allowed him to marry his Turkish fiancée, Hatice Cengiz. She raised the alarm just before 5 p.m, while still waiting outside.

Turkish officials believe Khashoggi was killed soon after he arrived, and in the face of Saudi denials, leaked gory details of what they believed happened.

Saudi Arabia’s statement in the early hours of Saturday morning was the result of international pressure to explain Khashoggi’s disappearance, and came after Trump dispatched his secretary of state, Mike Pompeo, to Riyadh to discuss the case.

According to the Saudi version of events, Khashoggi’s death was an accident, a result of a discussion that went awry. What happened next is less clear: the Saudi statement says the group of officials involved in the journalist’s death covered up the aftermath, but makes no mention of what happened to his body.

The fallout touches some of bin Salman’s inner circle. Five high-ranking officials have been removed from their posts, including the deputy head of the Saudi intelligence service. Bin Salman himself will lead a shakeup of the agency.

Trump called the official statement from Riyadh a “good first step” but added that some questions remained about the Saudis’ explanation and that talks would continue. Saudi Arabia had been a “great ally in the Middle East,” but that “what happened is unacceptable,” he added. Trump said he would work with Congress to develop a response to Khashoggi’s death, but said that he didn’t want sanctions to affect US arms sales to the kingdom.

“I would prefer if there is going to be some form of sanctions — this was a lot of people they’re talking about …. I would prefer we don’t use as retribution canceled $110 billion worth of work,” he told reporters after a roundtable at Luke Air Force Base in Arizona.

Trump said he would withhold further comment until he speaks with bin Salman.

White House press secretary Sarah Sanders said in a statement that the US acknowledged the Saudi explanation of the “tragic incident” and would “advocate for justice” for Khashoggi.

The apparent circumstances of Khashoggi’s disappearance caused worldwide revulsion. Businesses pulled out of an investment conference due to be held in Saudi Arabia next week, and Trump came under pressure to issue an unequivocal condemnation. On Thursday — before the Saudi statement — US Treasury Secretary Steven Mnuchin announced he would not participate in the conference.

Members of Congress could put pressure on the White House to act more firmly. Sen. Richard Blumenthal, a Connecticut Democrat, accused the Saudis of “buying time and buying cover,” calling for an investigation that included US involvement and any Turkish audio and visual records of the event.

“The Saudis very clearly seem to be buying time and buying cover, but this action raises more questions than it answers,” the Connecticut Democrat told CNN’s Wolf Blitzer on “The Situation Room” Friday night.

Rights group Amnesty International’s senior crisis adviser, Rawya Rageh, described the official explanation of Khashoggi’s death as being as “far away as possible from transparency” and called for “a neutral and independent investigation” by the United Nations.

Khashoggi went into self-imposed exile in June 2017 just as bin Salman was elevated to Crown Prince. In his first Washington Post opinion piece after he left Saudi Arabia, he described the political atmosphere in the kingdom as “unbearable.”

His killing at the consulate comes amid a wave of arrests that have targeted clerics, human rights advocates and members of Saudi Arabia’s intelligentsia.

The crackdown has largely been led by a powerful security apparatus, known as the State Security Presidency, created and led by bin Salman.

Assiri is believed to have been chief architect of the war with Yemen, and was previously the Saudi-led coalition spokesman in the kingdom’s war against Yemen’s Houthi rebels.

The two-star general’s position as spokesman made him a household name and he was soon part of the crown prince’s inner circle.

According to several sources, he chose the team involved in Khashoggi’s disappearance.