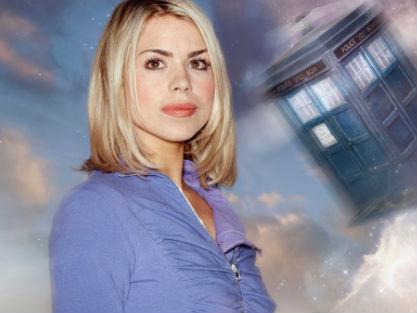 Billie Piper is returning to the world of Doctor Who.

The British actor will reprise the role of companion Rose Tyler for a new audio series produced by Big Finish, and devised by former showrunner Russell T Davies.

Titled Rose Tyler: The Dimension Cannon, the four-episode spin-off will follow the fan favourite as she jumps through dying parallel worlds in an attempt to locate the only person who can save it – her old friend, the Doctor. It’ll fill in the gaps from her dramatic exit at the climax of season two to her return in the season four episode, “The Stolen Earth”.

It will also mark the return of former Doctor Who stars Camille Coduri and Shaun Dingwall, who played Rose’s parents, Jackie and Pete. Mark Benton will also return as a new version of deceased alien investigator, Clive Finch.

Speaking about her return, Piper said: “I love how normal Rose is, and yet really extraordinary. She lived a normal average life but she is incredibly curious and has an enormous capacity for love and empathy and is really spirited.“

Producer David Richardson said: “I approached Russell T Davies with the idea of Big Finish making a Rose Tyler spin-off. He was very enthusiastic – as always – and suggested we followed Rose’s journey that ultimately leads to her finding the Doctor in ‘The Stolen Earth.’ I found the proposal irresistible.”

He added: “Russell guided us gently through the development – steering us towards ideas that worked brilliantly, ensuring things that needed improvement were fixed, and also throwing out the ideas that didn’t work. I’m absolutely delighted with what we have – a family drama about the end of worlds. It’s about love and loss and things that might have been.“

Piper was the first companion of the BBC’s revamped series, starring alongside Christopher Eccleston in 2005 and David Tennant in 2006. The brand new audio series will be released in September 2019.

Doctor Who‘s current season – its 11th – continues weekly on BBC One with Jodie Whittaker impressing critics as the first female version of the Time Lord.