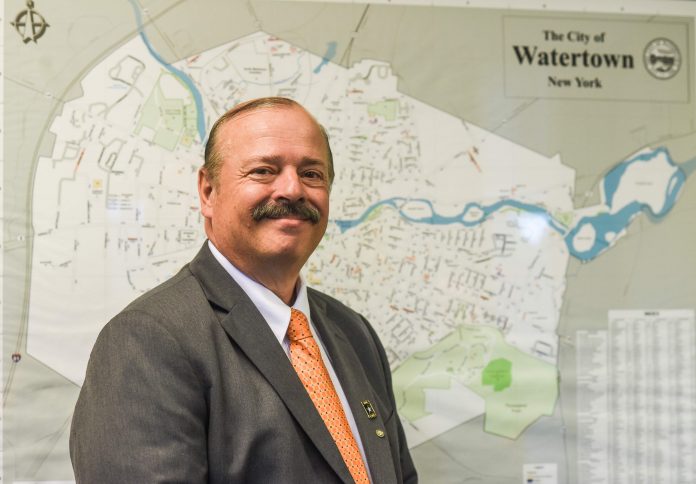 During his first day, Mr. Finn met with some department heads and city staff so he could start learning about what’s going in city government.

For the remainder of the week, he’ll be using “a booklet” of information that staff gave him to learn more about “issues and concerns” that he should know during his first days in the $120,000-a-year position.

“There’s a lot of things to read and learn,” he said.

With every hour that passes, Mr. Finn said he’ll find out more about the issues and challenges that face the city.

Shortly before noon, City Councilman Cody J. Horbacz said he planned to stop by to see Mr. Finn later in the day just to welcome him. He also planned to schedule a meeting with him so they can go over some issues.

“Let him relax before I start bombarding him with issues,” the councilman joked.

Just a few hours after starting, the walls of his third-floor corner office remained bare of personal photos or other items that will add to the decor.

“I just got here,” he joked, saying that he just needs a chance to make the office feel more like his own.

The four-year contract dispute between the fire department union and the city will become one of his biggest concerns. But he first must dig deeper into the subject before he knows enough about it to make suggestions or a recommendation.

Mr. Finn said he just hopes that some kind of result can be reached that will be fair to both sides. While he’s concerned about providing fire service to the community and making sure firefighters are safe, Mr. Finn has to consider the cost to taxpayers.

The City Council unanimously appointed him to the position on July 16 despite council members hearing about some controversies that Mr. Finn encountered in other communities where he worked.

He’s worked in Sandusky, Ohio; Sun Prairie, Wis.; Takoma Park, Md.; and Peekskill, N.Y. Most recently, he worked as the city manager in Bay City, Mich., until he left in June 2017.

Mr. Finn, 64, who has been living in Hilton, near Rochester, has moved to Watertown and has signed a lease to live here.

Before coming to work here, Mr. Finn visited Watertown about a half-dozen times while his son, Capt. Devin Finn, served at Fort Drum for a few years. Mr. Finn’s granddaughter was born at Samaritan Medical Center about three years ago before the captain moved on to Michigan, he recalled.

Through those visits, he found Watertown residents to be friendly. He also was impressed with the city’s parks and recreation facilities.

“It’s an attractive city,” he said.

Mr. Finn replaces Sharon A. Addison, who was appointed in 2012 and served until her contract was not renewed in January. She left the position on May 22.