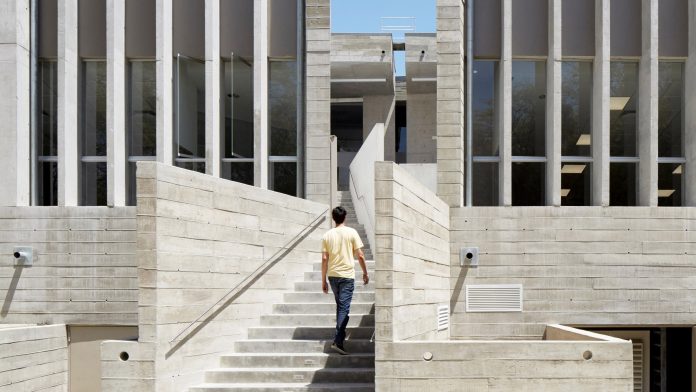 The biannual Mies Crown Hall Americas Prize, awarded by the Illinois Institute of Technology College of Architecture, went to Lima-based practice Barclay & Crousse for a university building in rural Peru.

Formed from wood-textured concrete, Edificio E at the Universidad de Piura campus, was acknowledged by the judging panel for its “deceptive simplicity and modesty “.

RIBA’s annual prize for the UK’s best new building was awarded to Bloomberg HQ, a £1 billion office block in the City of London. Foster + Partners impressed the judging panel with their commitment to sustainability and their neighbourly attitude.

President of RIBA Ben Derbyshire described the project as a “monumental achievement” and said the Norman Foster-led architecture firm had “smashed the ceiling” for office design.

In New York disgraced architect Richard Meiers permanently stepped down from his firm following accusations of sexual harassment. He will not return and the practice will come under new management.

The Pritzker Prize-winning architect had previously taken a leave of absence for six months after five women came forward with allegations of abuse, four of whom were former employees of Richard Meier & Partners.

Women reigned supreme at the Istanbul Design Biennial. A total of 70 per cent of this years’ participants were women designers, prompting curator Jan Boelen to proclaim that “the future of design is female”.

Female designers presenting at the biennial include Pinar Yoldas, who presented an installation of conceptual designer babies, while Charlotte Maëva Perret created an exhibition of Syrian soaps and Albibaba.com luxury leather bags.

PES Architects completed the Strait Culture and Art Centre in Fuzhou, China, a vast complex of curving halls that fan out like the petals of a jasmine flower. White ceramic tiles, louvres, mosaics and embossed panels clad the halls and theatres inside and out, creating ideal acoustics and arresting visuals.

BIG used prefabricated modules to create a “winding wall” of affordable homes in Copenhagen. The five-storey Dortheavej Residence provides 66 new homes for low-income residents, all realised in a harmonious palette of light wood and concrete.

Concept-driven offices for technology companies were the order of the day for Gensler. In Dublin the architecture firm built a new headquarters for computer giants Microsoft themed around an island, complete with a light-up digital waterfall cascading through the atrium.

In San Francisco, the firm commandeered a warehouse once used to build submarines for an HR software company, keeping the huge cranes in place around a new open-plan office.

Augmenting, accommodating or enhancing the human body and experience was a theme with designers this week. Australian designer Leah Heiss’ has made a range of hearing aids that look like precious gemstones.

Prague-based design studio 52hours created a bench for breast-feeding parents to sit in with their friends and family in public whilst cocooned in calm behind a shield. For the lonely living in big cities, London-based Aseptic Studio has created a cushion in the shape of a headless human for people to cuddle up to.

Projects that were popular this week included a tiny hotel room inside a 17th-century house just 2.4 metres wide in Antwerp, a beachfront cabana and pool nestled in a rocky hillside on the coast of Mexico, and a new font that could save users from forgetfulness.