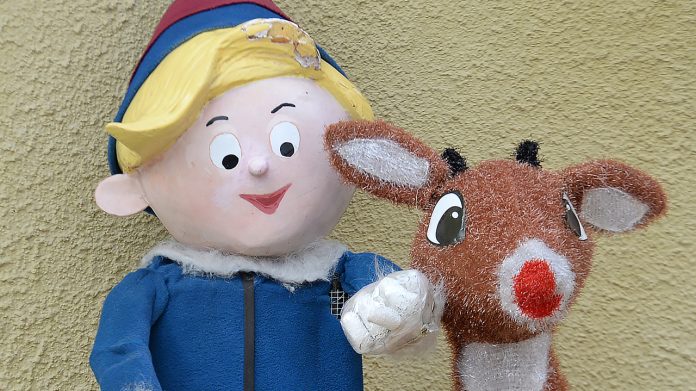 The serving of a search warrant Wednesday morning in central Fresno led law enforcement on a chase that ended with one arrest and an unexpected discovery: a stolen Rudolph the Red-Nosed Reindeer and handmade elf statue.

The beloved Christmas decorations were stolen from outside a home on Christmas Tree Lane last week. Distressed Fresno residents posted a plea on Facebook for their safe return that was shared nearly 3,000 times since Dec. 7.

Their wish was granted by members of the HEAT team (Help Eliminate Auto Theft Task Force), made up of numerous law enforcement agencies, including the Fresno County Sheriff’s Office.

The decorations will be returned Wednesday afternoon to the home on Van Ness Boulevard.

They were found behind an abandoned home in the area of Mariposa Street and Shields Avenue.

Before their recovery, Detective Tim Herzog said the HEAT team was serving a search warrant at a home in the area of Shields Avenue and Fresno Street. The team received a tip Wednesday morning about a man wanted on unrelated felony burglary charges. As law enforcement surrounded the house, the suspect, 34-year-old Kristopher Cartozian, ran out the back, hopped a fence and ran into an adjacent duplex before he was arrested.

As law enforcement officers backtracked his steps to see if anything was dropped, they spotted the missing Christmas decorations. Herzog said it’s unknown who stole the decorations, and no other stolen items were found.

Tony Botti, spokesman for the sheriff’s office, said, “The elf was also found to have four fingers on his left hand taped down, forming an obscene gesture. It’s unknown who is responsible for the prank.”

Decorations stolen from outside a home on Christmas Tree Lane in Fresno – including a handmade elf statue, and Rudolph the Red-Nosed Reindeer – are propped up against a home after Fresno County Sheriff’s Department HEAT team recovred them on Wednesday, Dec. 12, 2018.

The handmade elf – Hermey the misfit elf dentist – is a character from the Christmas television special, “Rudolph the Red-Nosed Reindeer” that originally aired in 1964.

Patricia Gallagher said on Facebook that her husband, Dan, spent many hours making the elf – a “very special” decoration for her family and those who walk the lane each holiday season.

Dan Gallagher, a father of four and teacher at Manchester Gate Elementary School, said “we’re just so grateful” for the happy ending made possible by law enforcement and all who shared the news of their stolen decorations. Hermey has been on display for five years and is one of the family’s most visible decorations.

Herzog said his team is “extremely proud” to have found their stolen property.

He said his team was involved in a similar story last year when they found a beloved stolen Barbie dream house after discovering a chopped-up stolen vehicle inside a garage, and that finding the stolen Christmas decorations was “quite comical.”

In response to a question from a reporter asking if HEAT is the “secret Santa of Fresno County,” Herzog responded with a smile and chuckle, “Oh, we would like to think so.”

Anyone with information about the stolen Christmas decorations is asked to contact the sheriff’s office at 559-600-3111, or Crime Stoppers at 559-498-STOP (7867) or valleycrimestoppers.org, where tips can be made anonymously and may be eligible for a cash reward.