Home Office Potential bombs: What we know after 5 days and 14 suspicious packages 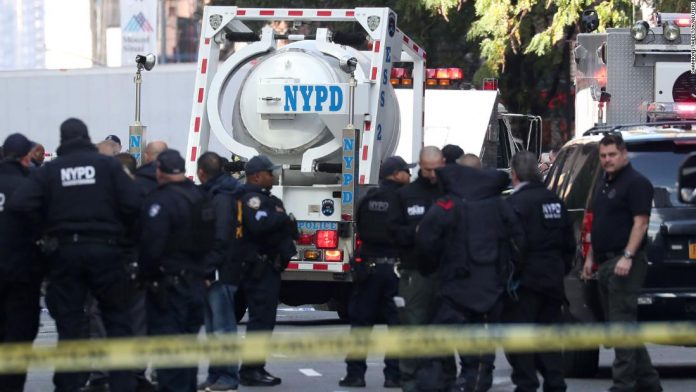 Authorities intercepted all packages before they were delivered to their intended targets. None of the bombs detonated, and no one was injured.

Authorities have intercepted at least 14 packages, officials said. They were addressed to:

Democratic US Rep. Maxine Waters: Two suspicious packages were announced Wednesday: one intercepted at a congressional mail-screening facility in Maryland and a second one at a postal facility in Los Angeles.

John Brennan: A “live explosive device,” according to New York police Commissioner James O’Neill, was addressed to the former CIA director and delivered by courier to CNN’s offices at the Time Warner Center in New York. It was discovered Wednesday morning.

Actor Robert De Niro: A suspicious package sent to him at the Manhattan building where his production company is based was reported to police Thursday. It shows similarities to the other pipe bomb packages, sources said.

Democratic US Sen. Cory Booker: A package addressed to Booker’s Camden, New Jersey, office was found in Florida and is similar in appearance to the others, the FBI said Friday.

Democratic US Sen. Kamala Harris: A suspicious package addressed to senator was found in Sacramento, California, a law enforcement official said Friday. An FBI agent said it appears to be related to the other packages.

What are the details of the arrest?

Cesar Sayoc, 56, of Aventura, Florida, was arrested Friday in Plantation, about 20 miles from his home, sources said.

FBI agents used flash bangs to arrest Sayoc and took him into custody near an AutoZone store in Plantation, a law enforcement official said. He was initially cooperative and told investigators that the pipe bombs wouldn’t have hurt anyone and that he didn’t want to harm anyone, the official added.

A white van — adorned with images of Trump and Vice President Mike Pence as well as a “CNN Sucks” sticker — in Plantation was towed away Friday to Miramar, Florida, where an FBI field office is located. The official said Sayoc had been kicked out by his parents and was living in the van.

He later retained an attorney, so police questioning has ceased, the official added.

Angela Fiore, owner of a properties management company in Miramar, told CNN she saw a huge law enforcement presence — the FBI; the Bureau of Alcohol, Tobacco, Firearms and Explosives; police and sheriff’s officials — at a nearby parking lot Friday morning.

“We see it on the news, all these packages that were sent to these Democratic hotshots, and then all of a sudden, it’s right across the street from us,” Fiore told CNN.

DNA found on at least one of the packages helped investigators identify Sayoc, and investigators were also able to track him using his cell phone, law enforcement officials said.

He is set to make a court appearance at 2 p.m. Monday in Miami before a federal magistrate.

Sayoc was not previously known to the Secret Service, law enforcement sources said, but Florida records show a string of arrests dating back to the early 1990s.

Notable was a 2002 arrest in which Miami police alleged Sayoc threatened to bomb the Florida Power and Light Co. and said that “it would be worse than September 11th.”

Online state records describe the offense as “threat to bomb” and “threaten to discharge destructive device.” They show that Sayoc pleaded guilty and was sentenced to one year of probation. There is also a notation about the adjudication being withheld.

The records show a total of eight arrests for offenses, including grand theft, battery, fraud and drug possession, as well as probation violations. In 2014, he was arrested and later pleaded guilty to stealing copper pipes at a Home Depot.

The adjudication of each of the arrests could not immediately be determined from the summary of offenses provided by the Florida Department of Law Enforcement.

Where did the packages originate?

Several of the packages went through a US Postal Service facility in Opa-locka, Florida, two law enforcement officials familiar with the investigation said.

“Some were obviously in the postal system,” William Sweeney, the assistant director in charge of the FBI’s New York office, said Thursday. “I’ll leave it at that.”

The Miami-Dade Police Department tweeted that its bomb squad and K-9 unit are providing assistance to federal partners at the Opa-locka mail facility.

Did the packages have any similarities?

The federal complaint against the suspect said, “Each of the … (improvised explosive devices) was largely similar in design and construction; they each consisted of approximately six inches of PVC pipe, a small clock, a battery, wiring, and energetic material. Certain of the mailings included photographs of the target-recipients marked with a red ‘X.’ “

Wray described energetic material as “essentially potential explosive and materials that give off heat and energy through a reaction to heat, shock or friction.”

The devices sent to Soros, Brennan and the top Democratic officials appeared to be pipe bombs, said Bryan Paarmann, FBI special agent in charge of the counterterrorism division in New York.

An initial examination shows they are rudimentary but functional and have similar construction. At least one contained projectiles, including shards of glass, a law enforcement official told CNN.

The packages were in manila envelopes with bubble-wrap interior, the FBI said, and each package had six American flag Forever stamps on the envelope. The devices had suspicious-looking packaging, and at least one had a timer available for a few dollars online that should be easily detected when mailed or delivered.

Were the pipe bombs designed to go off?

Authorities are wondering why none of the bombs went off, a law enforcement source told CNN’s Evan Perez. In a statement, the FBI called them “potentially destructive devices.”

The presence of what was believed to be pyrotechnic powder caused investigators to believe they could detonate, but it appeared the packages were handled and moved through the postal system without an explosion.

Based on an X-ray image of one of the devices, there appeared to be hazardous materials present, Anthony May, a retired ATF explosives investigator, told CNN’s Brooke Baldwin. But it also appeared to be missing a crucial component for a functioning explosive device.

Speaking at a news conference Friday, Wray said, “Though we are still analyzing the devices in our laboratory, these are not hoax devices.”

Where are the packages now?

The devices sent to Clinton, De Niro, Obama, the CNN offices and Waters’ East Coast office are either with the FBI or headed to the agency’s lab in Quantico, Virginia. A controlled detonation was conducted on the device sent to Soros, while the one mailed to Waters’ West Coast office was rendered safe by a bomb squad.

It’s unclear where the others are.

A suspicious white powder found in an envelope along with the device sent to Brennan and CNN was tested and found not to be anthrax or other known agents, a source said. Additional tests will be done in the coming days.