Home Office PLO mission in Washington is a ghost of an office 2 weeks... 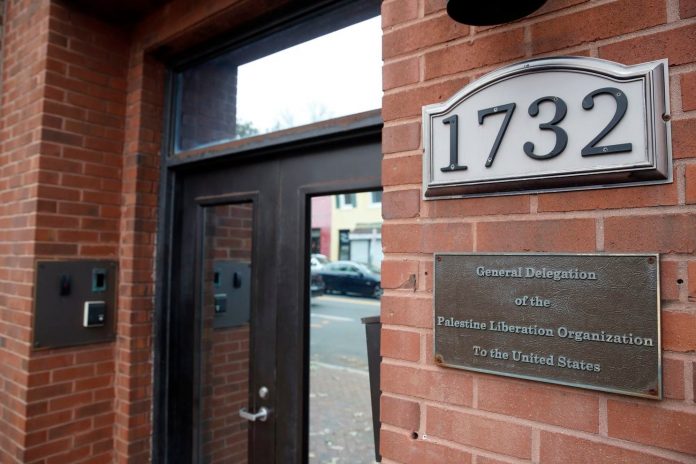 The Trump administration has ordered the closure of the Palestine Liberation Organization’s office in Washington. (Alex Brandon/AP)

The Palestinian flag still hangs, limply, from a pole above the door of the PLO office in a red brick office building in Washington. It takes a few minutes for someone to answer the doorbell.

Peter Orinion buzzes a visitor into the otherwise deserted lobby, where the security officer’s desk is unattended. Orinion says he is part of a skeletal crew still working at the post of the General Delegation of the Palestine Liberation Organization to the United States.

On Sept. 10, the Trump administration ordered the PLO to close the office within 30 days, saying the Palestinian side “has not taken steps to advance the start of direct and meaningful negotiations with Israel.”

With two weeks remaining before the deadline, the Palestinian employees have left for the West Bank city of Ramallah. Other workers, almost all of them Americans, are already out the door or soon will be. The email system has been shut down.

Only the decor is untouched — historical photographs of Jerusalem’s Old City on the walls and framed pictures of Yasser Arafat and Mahmoud Abbas, the Palestinian Authority president, hanging behind the front desk.

This ghost of an office is a metaphor for the collapsed state of U.S.-Palestinian relations, with vestiges of the structure remaining but nothing of substance happening.

“This is the dream of Trump,” said Orinion, who is awaiting orders on what to do when the lease runs out at the end of the month and he, too, will be out of a job.

The closing of the PLO outpost means an end to an aggressive Palestinian effort to engage with Americans. Husam Zomlot, the Palestinian envoy recalled to Ramallah in May to protest the opening of the U.S. Embassy in Jerusalem, said he and his staff of 20 had devoted most of their time to speaking with members of Congress, the Jewish community, university students, church groups and think tanks.

The State Department ordered all such public operations to cease by Sept. 13 — coincidentally, the 23rd anniversary of the Oslo Accord signed by Israel and the Palestinians at the White House in front of President Bill Clinton. In effect, there was no reason to keep the doors open.

Zomlot called the closure “a bullet in the heart of a bilateral relationship.”

“What this administration has done is political, diplomatic malpractice in the highest order,” he said in a telephone interview, “and it will have severe consequences on relations we have with the administration.”

Zomlot was one of only two non-U.S. citizens assigned to the mission. He said the State Department canceled not only his visa but the visas of his wife and their two children. They have already left the country.

The remaining employees have been assigned to help with the final steps of closing the mission. Zomlot said he told them they were being fired via a video conference call.

“The biggest loss for us, after this voice and this platform, is the human capital,” he said. “We recruited these people to build stronger ties with the American people. It was not my success the last two years, it was their success. Everyone I recruited I saw as a leader. That hurt me the most, when I told them I had to let them go.”