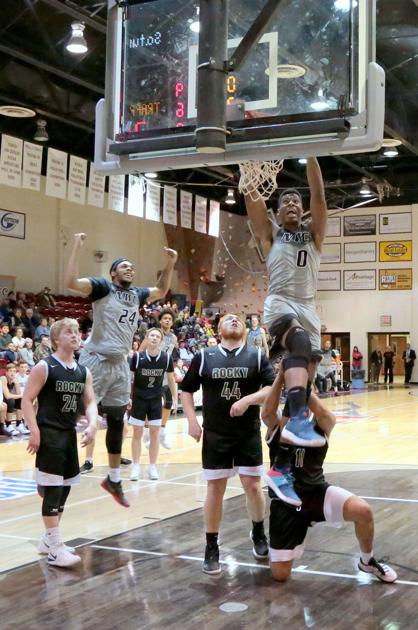 The walls of Duwad Akbar-Rahkman’s Northwest College office were nude.

He’s got ideas, plans, but no time to transfer family photos and sports idols’ photos from packing boxes to become adornments.

One of these days when he exhales, Akbar-Rahkman will display pictures of his sons, both former college basketball players, and maybe even a couple of Philadelphia 76ers photos from the old days, back when Julius Erving and Moses Malone brought an NBA title to PA.

This is the kind of thing that happens when you are hired to run a junior college basketball team on Oct. 15, one which has been practicing for two weeks before even meeting you.

“We thought we might have a coach in place a little before that,” athletic director Brian Erickson said.

Actually, the Trappers did. The coach was Erickson, as it had been for the previous six seasons. Only Erickson got promoted Aug. 23, creating the coaching vacancy at a most inopportune time.

Most college basketball coach hires occur in the spring, after completion of last season, not in October, on the cusp of this season on a last-minute, hurry-up basis.

In fact, the national search process was accelerated so much Akbar-Rahkman’s official status is interim and post-season the school must run through the process again.

The Trappers are 4-5 overall, very much transitioning from Erickson’s guys – there were a half-dozen players back and he recruited the others – to Akbar-Rahkman’s guys.

As if things weren’t jumbled enough, all but one game has been on the road. The getting-to-know-you process has been tricky.

“They’re still learning me,” Akbar-Rahkman said in his basically empty office after the Trappers notched their most emphatic and pleasing win of the season, 99-66 over the Rocky Mountain College junior varsity.

The clicking-on-all-cylinders game was played at Cabre Gym, a significant first impression by Akbar-Rahkman for the home fans.

It was a feel-good night for more than one reason. Northwest prides itself on a diverse student population and was celebrating International Week. There are 19 student-athletes from other countries, including players from Holland, Belgium, France and Poland on the men’s basketball team.

Part of the celebratory atmosphere showcased foreigners picking a favorite song from their country to be played.

“It was made by my uncle,” he said. The song is called “BA Talks jy weet.”

If the meaning was lost in the atmosphere, it was clear the true international language here was hoops.

Grantsaan, who scored 14 points and grabbed 11 rebounds in the Rocky win, said it was nerve-wracking for the players as time passed without a new coach.

“For us, the team was impatient,” he said. “And still there was no coach.”

Erickson said there were rumblings some players might leave, but in the end the whole roster stayed.

“Everyone has the same goals to win,” said returning guard Reme Torbert, who scored 9 points in the home win.

So Akbar-Rahkman walked into a situation where his entire team was set, the first games took place about five minutes later (a scrimmage Oct. 18), and the former, popular coach was not only still in the building, but his boss.

As a basketball lifer he was prepared.

Akbar-Rahkman is 59, from Allentown, Pa. Most recently he was affiliated with Lehigh Carbon Community College, a Division III junior college program in Pennsylvania. Northwest is Division I.

During his lengthy career he has also been an assistant coach at NCAA Division I Howard University and Division III Muhlenberg in Pennsylvania, and coached military rec teams.

“I have been in a variety of different situations,” Akbar-Rahkman said. “Parts of my background contributed to me getting the job.”

He has two sons, Muhammad Ali and Shahad, who both played college basketball, and a daughter Nailah, who played high school ball. Shahad was a 1,000-point scorer at East Stroudsburg in Pennsylvania.

The most prominent is Muhammad Ali Akbar-Rahkman, who was a guard on Michigan’s Final Four team last season, averaging 12.9 points and 3.2 assists a game.

Hoping for a position in last spring’s NBA draft the younger Akbar-Rahman inconveniently broke his foot.

Now healed, after helping his dad move to Powell, he has no time to spend in his room in the new house because he is playing for the Canton Charge, affiliated with the Cleveland Cavaliers in the NBA G League.

In 1979, Duwad Akbar-Rahkman met his son’s namesake in a small-group setting at his Deer Lake, Pa., boxing training camp, the multiple heavyweight champion of the world leaving an impression that hasn’t dimmed.

The coach’s eyes still glisten at the retelling of how circumstances allowed him to accompany an artist making a painting presentation to Ali.

And although it wasn’t planned, how Ali worked out for the benefit of three carloads of kids who traveled from Allentown.

“He put on a show in the ring,” Akbar-Rahkman said.

When Ali finished he peeled off his hand wraps and tossed them to two kids as souvenirs.

The Trappers have been on the road so much they are quickly accumulating frequent bus miles.

“It’s like the old barnstorming days of the NBA,” Akbar-Rahkman said. “It’s crazy.”

He said his offensive style is a little more structured than Erickson’s, but the team has a lot of potential.

The last recruit for the 2018-19 team was Saheem Anthony, who is 6-foot-6, wiry, with a picturesque long-range jump shot. He is the nephew of NBA star Carmelo Anthony, with whom he has engaged in one-on-one contests.

Asked if he has won any of those games, the younger Anthony said yes. To 11 points? To 21?

Akbar-Rakhman doubts this claim though.

Versus Rocky, Anthony nailed six three-pointers for 20 points, looking as if he can shoot against anyone.

Anthony is from Brooklyn and spent one year at Central Georgia Technical College, but knowing some other Northwest athletes from New York eased his shift to Wyoming.

The Trappers have talent – at least three Division I prospects according to Akbar-Rahkman – so Anthony figures they will adapt to the new coach’s approach.

“We have a lot of games to jell,” Anthony said.

Torbert and Akbar-Rahkman shared the same observation, that everything up to now adds up to adversity that must be conquered.

Grantsaan said he is glad this team stuck together.

Akbar-Rahkman is brainwashing the players into seeing the game his way.

“The message is this,” he said. “It’s about you and getting where you want to go. You don’t have much time. This time goes fast.”

They sound as if they are on the same page. Akbar-Rahkman is looking for a big breakthrough when Region IX play starts in January.

“It’s about building for conference,” he said.

By then Akbar-Rahkman may have found time to redecorate the office. Erickson’s family pictures are elsewhere. So are his Larry Bird posters.

“I don’t like Larry Bird,” Akbar-Rahkman said. “I respect him.”

But not enough to stare at his jump shots all day on the wall.

There is a much greater likelihood the office finished product decor will include the faces of Muhammad Ali and Muhammad Ali, the fighter and the son.