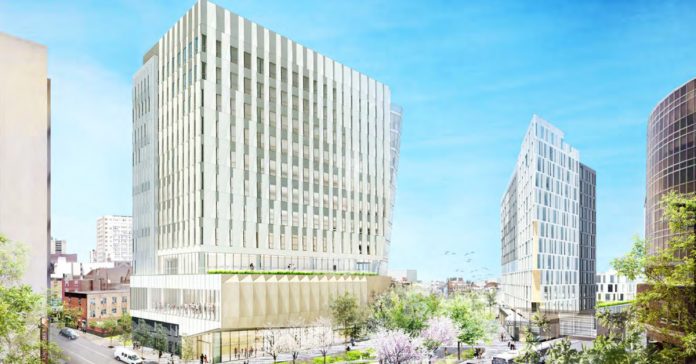 Over a year after developer Pennrose was picked to oversee a major Equal Justice Center and affordable housing project in Chinatown, they’ve settled on the first phase of a new design.

It will bring two buildings—one for the Equal Justice Center and another for housing—as well as nearly 40,000 square feet of public space to the corner of 8th and Vine, which is currently a city-owned parking lot.

The new plans for the development were put together by Pennrose and WRT Design. They’ll go in front of the Civic Design Review (CDR) for the first time next week—and they’ve undergone some changes since their original design.

Pennrose’s first proposal last year called for four buildings 14 stories high, including one for senior housing, another for the Equal Justice Center, a third for apartments, and a final one for a hotel. The Philadelphia Redevelopment Authority (PRA), which owns the property, chose that design over one by the Parkway Corporation, following a community meeting last summer.

Some of those plans have been tweaked ahead of the CDR meeting next week. The new proposal, which was submitted July 24, has one 11-story building that will house the Equal Justice Center and eight residential units on the first two floors. The justice center will provide affordable legal services to people in the community, according to the proposal.

A second building will be 12 stories tall with 51 senior affordable housing units on floors two through four, including amenity space, a terrace, and a green roof. Floors five through 12 will hold 127 market-rate units, also with amenity space.

Two SEPTA trains, a Regional Rail and the Broad-Ridge Spur, run under the lot, which means some of the space can’t be developed. However, the proposal calls for public space there instead, amount to nearly 40,000 square feet. That public space will include paving, newly planted trees, outdoor seating, and shaded areas, according to the proposal.

The two-building plan is only phase one of the development, Jared McKnight, a designer with WRT Design clarified Friday. A second phase is planned for the future, though whether that phase will include the hotel is unclear.

In addition to detailing the plans for the physical space, developers used the proposal to speak to the service the benefit would provide to the surrounding community, especially with the Equal Justice Center.

“The EJC will provide a legal service model oriented to transforming the provision of civil legal services to low income members of the Philadelphia community by co-locating a number of legal aid agencies and nonprofit organizations and groups in a new centrally located headquarters,” the proposal said.

It added that the economic and social impact of the development is, “expected to exceed $200 million per year.”

The project will go in front of the CDR on Tuesday afternoon.

Correction: An original version of this story implied that the hotel would not be a part of the development. In fact, the second phase of the project is still in the works, and might include the hotel. The story has been changed to clarify this.