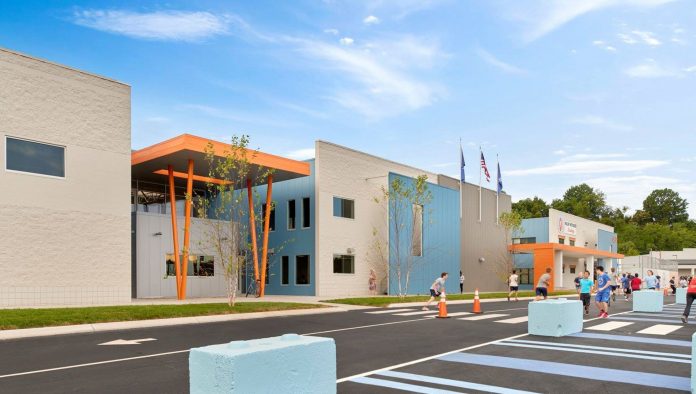 The design of Valor Collegiate Academy, which was built by redesigning a former office building and big box retail store, recently received an award from AIA Middle Tennessee.(Photo: By Nick McGinn)

The two award-winning projects are: RePublic High School, a renovation and addition to a mid-century school building, and Valor Collegiate Academies, an adaptive reuse of a former office building and big box retail store that was transformed into an elementary, middle and high school in Nashville.

Both projects were led by architect Ethan Levine who is heading up the new library and offices in Dickson at the former Food Lion building on Henslee Drive. Levine is a Dickson resident.

“Creating a vibrant educational campus out of a defunct commercial site was a welcome challenge for our team. So proud to have helped create this space…” Levine said.

To create two distinct schools out of the former Lowe’s building, the architect bifurcated the building and created a 10,000 sf courtyard where interior space once stood. Sunlight now penetrates into the center of both the middle and high school buildings, creating opportunities for day lighting in classrooms at the innermost portions of the building. In addition, a second floor was inserted into the exiting building envelope, effectively doubling the usable area within the existing footprint.

The Middle Tennessee American Institute of Architects Design Awards are given annually to promote design excellence among members of the design community and the public at large. Award winning projects are selected by a jury of design professionals.

“Manuel Zeitlin Architects are very excited that the City of Dickson had the vision to recognize the opportunities within the former Food Lion building and look forward working on the Dickson County Library,” Levine said.