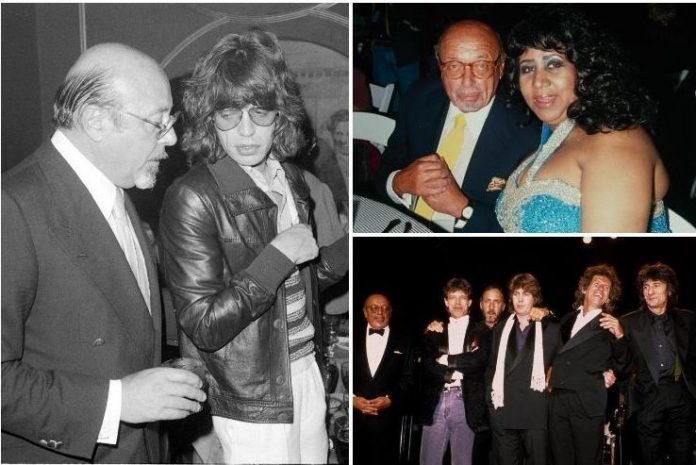 Those are the explosive claims of Dorothy Carvello, former secretary to founder Ahmet Ertegun, and Atlantic’s first female A&R executive.

She claims she suffered sexual harassment at the hands of her drugs fiend boss and his letchy pals.

In her new book, Dorothy reveals how male execs would brag to her about their manhoods, ask her for blow jobs and beg her to sleep with them.

She says her role involved cleaning puke and drugs off her bosses suits, and says she was groped and abused.

And she would also be asked to go through her Roladex looking for women to “entertain” visiting talent.

Ertegun would ring her at 3am demanding vodka, strippers and hookers.

And prostitutes would try and blackmail him with naked pictures, only for him to pay them off with huge wads of cash, according to Dorothy.

She writes: “These guys would f*** girls young enough to be their daughters without thinking twice.

“Ahmet took great pride in it, like he was the Turkish sultan offering his concubines.”

Her boss even bragged about his sordid exploits telling her once: “Last night I went out to a concert.

“Afterward I went backstage with the lead singer and he had five girls lined up naked and we took turns f***ing them, one after the other.”

She said her “moral lines became blurred” as she wrestled with the behaviour of the men around her and the allure of her dream, partying with Mick Jagger and Jimmy Page.

And she says her bullying boss would grope her “like an octopus” and fly into physical rages, once grabbing her arm so tightly it left a hairline fracture.

She wrote: “I lived in a ‘boys will be boys’ world where sexual harassment was taken for granted.

“I knew it was wrong but I didn’t consider fighting it.

“Fight it how and with what power? The only option, it seemed, was to grin and bear it.”

She reveals how she has kinky sex with INXS wildman Michael Hutchence who, she writes, “banged all over the room” and “went through the first eight positions of the Kama Sutra as if it was nothing.”

Her boss congratulated on doing her job well.

Ertegun died in 2006 after falling and hitting his head months earlier.

is now chaired by Craig Kallman, and has signed 300 artists including Ed Sheeran, Cardi B and Coldplay.

Anything for a Hit: An A&R Woman’s Story of Surviving the Music Industry, due September 4, is available on Amazon.