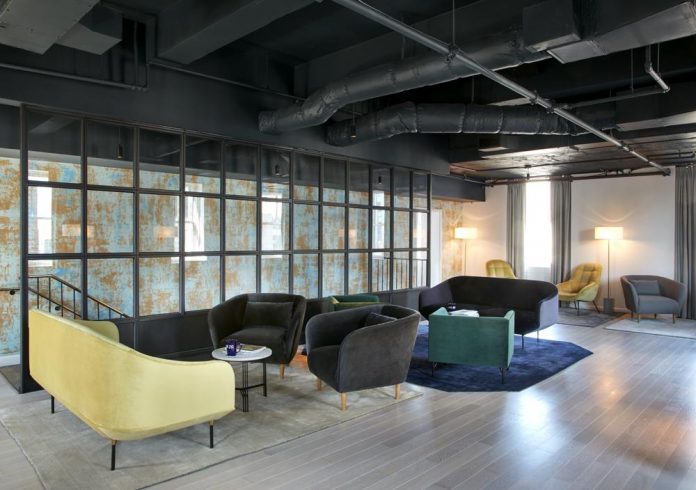 Not many people can get away with sleeping on the job. Tishman Speyer, one of New York’s largest commercial landlords, wants to change that.

Last year, the company introduced Zo, a program to expand the perks offered to its tenants, including nap rooms at Rockefeller Center. “Please associate me with sleeping on the job,” says E B Kelly, a managing director at Tishman Speyer who oversees the effort.

“The trend is as much about an integration of work and life as it is a balance of them,” says David Moore, a senior vice president with EQ Office, a landlord that has converted underused office space at Willis Tower in Chicago into several floors of stylish lounges.

Offered in those lounges, whose décor includes exposed bricks and beams that are unexpected in a 1970s-era skyscraper, are table tennis, coffee stations and a cocktail bar that opens at 2pm. The perks are a $50m piece of a $500m makeover of the building, formerly known as the Sears Tower.

Landlords in Chicago and other major cities are feeling the pressure of stubbornly high vacancy rates. In the third quarter, the rate stood at 16.6 per cent nationally, which is high compared with the last decade and a slight uptick over the past couple of years, according to Reis, a real estate data company.

And shared-office providers like WeWork, whose casual and whimsical environments feed their popularity, are adding to the squeeze, brokers say.

“I don’t see how they can’t,” says A Mitti Liebersohn, the president of the New York office for Avison Young, a commercial real estate service provider. “Every day, you are hearing about another co-working company and the amount of space they are taking.”

The growth in shared workspaces is propelled in part by tenants interested in more collaborative work environments but also in smaller footprints and cost savings. As bench-seating replaces cubicles and corner offices, the amount of square footage per worker has shrivelled.

But it is not clear that small and less-capitalised tenants are willing to pay more for the extra space that table tennis and other extras require, brokers and owners say. In those cases, landlords provide space for those amenities instead, which can be a powerful recruiting tool for tenants, Moore says.

“It’s clearly an advantage,” he says.

At Willis, Chicago’s tallest building at 110 stories, the renovation may be paying off. In 2015, when EQ, a division of the private equity firm Blackstone Group, purchased Willis, its occupancy rate was 80 per cent. Today, it is 95 per cent, Moore says. Similarly, he added, asking rents of $20 per square foot have climbed into the mid-$30s.

For employers unable or unwilling to increase workers’ pay, amenities might also provide a sort of consolation prize, economists say. Wages have grown slowly since the 2008 financial crisis, and inflation has offset gains in recent months. To lure workers, companies are shifting toward non-wage compensation, offering better benefits and perks.

And landlords are getting into the game. Last year, the owner of 1735 Market St in Philadelphia cut the ribbon on a 20,000-square-foot amenity floor that features a tabletop shuffleboard game, gas fireplaces and 18 wine lockers, plus a conference centre lined with tables and screens.

Previously, the floor contained a cafeteria and a data-processing centre used exclusively by a bank, according to Equity Commonwealth, the owner of the property, which added that the building was 91 per cent leased.

In the past, if cafeterias existed at all, they were often the walled-off domain of just a single tenant, according to brokers. Tenant-provided perks are still common outside major cities, they say, especially in lower-density, office-park-type settings like in Silicon Valley, though single-tenant complexes are often the norm there anyway.

But in New York, barriers are being breached, like at 4 Times Square in Manhattan, where, for years, only employees of the magazine publisher Condé Nast could grab lunch at the chic cafeteria designed by the architect Frank Gehry.

Since Condé Nast packed its bags in 2014, the Durst Organisation, which owns the building, now called One Five One, has undertaken a $150m renovation. Included are $37m for amenities, like modernising the cafeteria, which is now open to the entire 47-story building.

Plus, a circular area behind the Nasdaq digital ticker that once housed ventilation equipment has become a spacious lounge that serves cappuccinos in the morning and craft beer in the afternoon.

Martini lunches may have fallen from favour, but brokers say some landlords believe that adult beverages poured during office hours can charm tenants that might otherwise opt for co-working spaces, which often have kegs on hand.

It is unclear, though, if landlords can play the role of bartender. In California, WeWork shut off its beer taps this year over concerns it was not properly licensed. (Durst holds a liquor license for its facility, according to a company spokesman.)

Wrapping the perimeter of the Durst lounge is a “living wall,” a lush array of 2,200 ferns and other plants. Similar walls are becoming darlings of office designers looking to jazz up common areas. And nearby is a black-felt pool table, plus a pair of swings large enough for adults to curl up in.

The scene mirrors a trend in decked-out areas constructed at New York condos and rentals in recent years. Among them is Sky, a 1,175-unit rental tower near Times Square that offers 70,000 square feet of amenities, including three swimming pools, a full-size basketball court and a lawn-lined terrace.

Not all pastimes are equal. Thomas Bow, who handles Durst’s commercial leasing, drew the line at ping pong tables. “They sort of interrupt everything else around you,” he says on a recent tour of One Five One.

Bow added that rents started at about $85 a square foot annually, up from $80 before the extras were finished.

And landlords do not seem keen to install Sony PlayStations just yet. But golf simulators — where workers can whack balls against a soft screen that depicts holes on actual courses — are popping up.

The owner of 2001 M St. Northwest in Washington added two simulators, including one that features a convincing version of a putting green, as part of a two-year renovation completed in 2016.

In October, the 10-story property was about 90 per cent leased, according to the owner, Brookfield Properties. Rents in the area hover around $55 per square foot a year, brokers say.

An interest in healthy employees seems to be motivating developers. At 40 10th Avenue, a prismatic new office building in Manhattan’s meatpacking district, those who commute to work on two wheels have a place to stash their bikes, courtesy of a dedicated basement room.

Bike storage is not unusual. In 2009, New York passed a zoning amendment requiring all new office building to offer some parking. But 40 10th Ave, from Aurora Capital Associates and William Gottlieb Real Estate, also offers adjacent locker rooms with showers to freshen up after a long ride.

In San Francisco, if muscles are knotted, workers can stop for a massage at tables set up in the airy lobby of 1 Bush Street, a property owned by Tishman Speyer. The back rubs are coordinated through Zo, Tishman’s intra-portfolio concierge service, which also helps find baby sitters, book manicures and plan trips.

Not all in the latest package of amenities are tactile: Property owners are also dangling flower arrangements for employees out sick, discounts at local shops and private medical clinics.

With Zo, doing nothing is also an option. At some Tishman buildings, like Rockefeller Center, which NBC, Deloitte and Simon & Schuster call home, enrolment with the program grants access to quiet rooms where naps are encouraged.

In a dark-hued Zo facility that opened there last spring, Seu Jorge’s cover of “Life on Mars?” tinkled through speakers on a recent morning. Stressed-out Zo members can slip into one of three long “pods,” which have pillows and eye masks, and catch 30 minutes of sleep for $5.

“When we first began talking about it, people would say: ‘Napping in the workplace? Are you crazy?’” says Kelly, the Tishman managing director. “But it’s been terrific,” she says, adding that Tishman tenants logged about 2,000 naps from July 2017 to July 2018 at Zo facilities in New York.

“We are trying to bring a little energy and excitement to the workplace,” Kelly says, “so there’s a little beauty, joy and fun.”