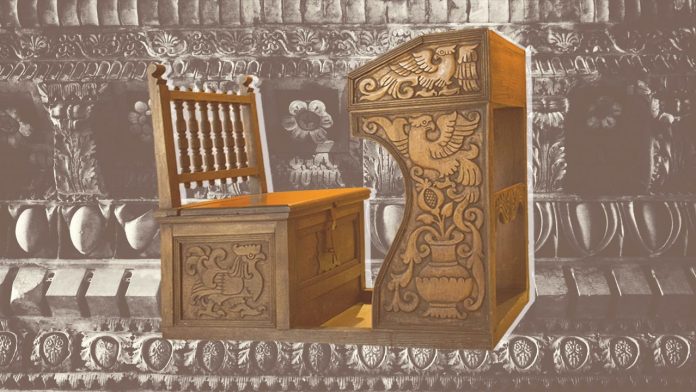 Love it or hate it, some sort of open-plan office is likely the place you get most of your work done. And while academics and architects debate the virtues of design and its effect on productivity, the larger question of how we got here remains unanswered. Surely at some point in history, someone decided that having a dedicated workspace was a good thing. And at another time, someone else suggested that work should be done in one great room, unencumbered by walls or other boundaries.

Related: How can you focus in an open office?

History tells us that as far back as ancient Rome, the Tabularium was used to house public records and also may have served as an office building for workers. But medieval monks may have been the first to use cubicles–or a scriptorium, as it was called–as they worked on manuscripts. These writing rooms were also used by lay scribes and illuminators.

Botticelli’s painting of St. Augustine in his cell depicts a small three-walled alcove with a curtain, further suggesting that such work in Renaissance times was done in secluded spaces to maximize focus. Coincidentally, this painting hangs in the Uffizi Gallery, which was originally the central administrative building of the Medici empire.

The 1600s ushered in a new era for the workplace. Witold Rybczynski, the author of Home: The Short History of an Idea, reveals that lawyers, civil servants, and other professionals started working from offices in London, Amsterdam, and Paris, where previously, many had worked from home. In London, for instance, the Old Admiralty Buildings were the first purpose-built offices constructed in 1726 to store paperwork for the Royal Navy and had meeting spaces like the Admiralty Board Room, which is still in use today.

The East India Company followed suit with its own headquarters, and others began to build as well during this time, prompting Sir Charles Trevelyan, permanent secretary to the Treasury from 1840-59, to write:

For the intellectual work, separate rooms are necessary so that a person who works with his head may not be interrupted; but for the more mechanical work, the working in concert of a number of clerks in the same room under proper superintendence, is the proper mode of meeting it . . .

Flash forward to the early 20th century, and Frank Lloyd Wright steps in to design the Larkin Administration Building, the first modern office, in 1906, and then the first open-plan office building for SC Johnson Wax in 1936. It’s not surprising that the idea of work was changing, and office layouts were designed to maximize productivity, which was the holy grail for “management experts” like Frederick Taylor who were consulting with companies during the latter half of the 19th and early 20th centuries.

1960s: Distractions and the “Action Office”

It wasn’t until the 1960s that the open office really started to gain traction as a popular design for workplaces. Burolandschaft, originally a German design approach that translates to “office landscape,” aimed to democratize the workplace and create more interaction between colleagues.

In response to the growing popularity of the vast open office space, Robert Propst, president of Herman Miller Research Corporation, wrote, “Today’s office is a wasteland. It saps vitality, blocks talent, frustrates accomplishment. It is the daily scene of unfulfilled intentions and failed effort.”

The company’s answer was the debut of the Action Office, which was arguably the first flexible cubicle space, because it offered an alternate work setting with some privacy while still not restricting movement.

There was a bit of a backlash to the open office as more women entered the workforce in the 1960s and ’70s. An article from the Observer in Britain from 1968 detailed the problems (and some positive elements) of the new Boots open-plan office. From the piece:

Ivan Mitchell, Boots’ own chief architect, sits in a private office with smoked glass walls through which he is clearly visible and says that he suffers from visual distraction. He has to turn his desk sideways to avoid seeing the mini-skirts.

Unsurprisingly, this ushered in a new design feature that was called a modesty panel, which covered the front of the desk so the female workers could wear their skirts without being on view. Yet another Observer article from 1970 argued, “A woman’s legs are nothing to be ashamed of, and there is no reason for hiding them behind an obstruction that serves only to tear stockings and add to discomfort and inconvenience.” Rather, the designers interviewed for this piece suggested that the middle drawer of a desk should be removed to allow the female worker to cross her legs more easily.

As more businesses caught on to the idea of the Action Office and its modular flexibility, the concept morphed into a mass production of what we now know as cubicles. This wasn’t a stellar iteration for designer Robert Propst, who declared, “Not all organizations are intelligent and progressive. Lots are run by crass people who can take the same kind of equipment and create hellholes. They make little bitty cubicles and stuff people in them. Barren, rat-hole places.” Too late, as many companies had already made the investment in the fabric-covered mazes.

Now, of course, companies from small startups to massive global corporations are vying to up the design ante in favor of keeping their workers happy and productive. We’ve seen the introduction of game spaces, sleep pods, plant walls, lounges, hot desks, and more. And alongside all this: a return to working from home, just like in the Renaissance.