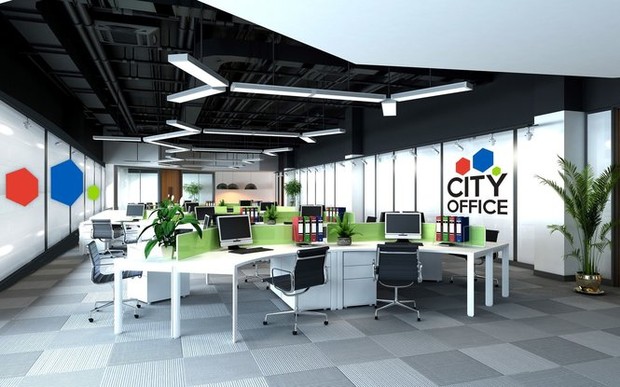 BAY CITY, MI — After you get your food fix on the main level of Bay City’s City Market, head down to the lower level to get some work done in the new and edgy office space.

City Office, a shared work space featuring a colorful theme, open floor plans, games, and a refreshment bar, opens this fall and will help you “improve creativity,” at work.

“What we have in downtown Bay City is a really massive resurgence of people coming back to Bay City to set up shop,” said Matthew Meehan, owner of City Office.

City Office, 401 Center Ave, will offer 250 memberships that will allow customers to use the open space as a work area or they can choose to work in a private office.

Prices for the memberships haven’t been revealed yet, but when they are introduced there will be an “early bird special” for those who act fast. Some memberships were already pre-sold, Meehan said.

He said Google’s office design came to mind when he was planning the layout and design of City Office.The technology company is known for its creative office spaces which showcase lots of color, different themes and encourage creativity. Google also has flexible work schedules where you’re free to come into work at 3 a.m. or meet up with colleagues.

Membership holders will also have that same opportunity to work any time or day as the building can be accessed 24 hours a day with key code access. During normal business hours or work times, staff will be there to manage the office.

Another highlight of the contemporary work space are the games: minature golf and pool tables.

“You should have fun when you’re at work,” Meehan said.

Several conference rooms, TV lounges, furniture equipped with outlets, wifi, an espresso machine, and a full kitchen will also be at the disposal of the membership holders, said Nicole Kinde, executive manager of City Office.

One of the main goals for the space is to help propel business forward in Bay City.

The City Market, which Meehan also co-owns with his husband Rod Hildebrandt, is an example of the growing businesses. City Market opened in 2017 and features dozens of vendors selling fresh, locally sourced food. Other developments that speak to the growth of Bay City are Uptown Bay City, and Jenifer Acosta’s developments such as the Times Lofts and the historic Crapo building.

“We’re right here on the riverfront and we were seeing a decline for so long, but now with the redevelopment there’s a lot of people to come back and open new businesses,” Meehan said.