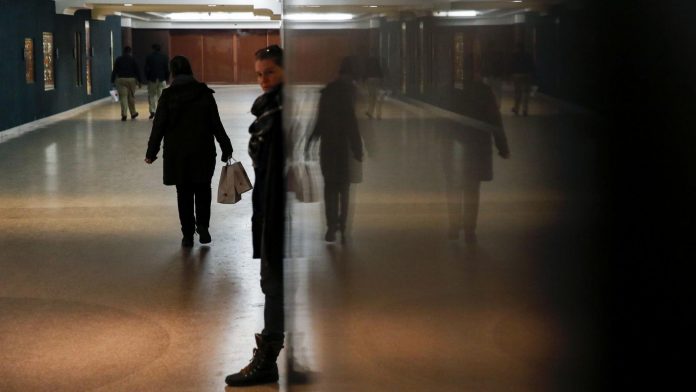 I decided to try to take the Pedway back to the office.

It wasn’t particularly cold or snowy last Monday, but since the weather is only going to get colder and snowier in the next few months I thought I should learn the subterranean route from 303 E. Upper Wacker Drive— the studios of WGN-AM 720 where I go several times a week to bloviate — to the Tribune’s offices at 160 N. Stetson Ave. in Prudential Plaza, roughly three blocks away.

Chicago’s Pedway is a beautiful network in theory — a 5-mile web of mostly indoor, largely underground walkways connecting more than 50 buildings to commuter train stations and other amenities in and near the Loop, a haven from traffic and the elements.

In reality, though, it’s an ugly labyrinth — a thicket of confusing signs, dead ends and frustrating choices.

So “try” is the operative word in my opening sentence. I was going to try to take the Pedway back to the office.

I plunged down the escalator apprehensively. Two minutes later I wandered into a hotel lobby having mistakenly followed what I thought was the proper arrow. Five minutes later I found myself opening a door onto a Metra platform. I tried to retrace my steps and, three minutes after that I was clomping around the dank recesses of Lower Michigan Avenue dodging water runoff from the street above.

Earlier this year, after we vacated Tribune Tower, I had similarly frustrating misadventures in my first few attempts to take the Pedway from the Washington stop on the CTA Blue Line to Prudential Plaza. The first time I somehow ended up on Lower Randolph Street and had to backtrack through the Aon Center. The second time I had to double back when I reached the bowels of the Harris Theater.

“It’s laughable,” said Howard Learner, executive director of the Chicago-based Environmental Law and Policy Center, the organization that’s leading efforts to improve the Pedway. “The signage directing you from the Metra station to the Pru is easy to miss and sophomoric. One has a letter missing. If you don’t walk that route everyday, you’ll get lost.”

“You are here” maps are scarce, difficult to decipher and too small. Directional signs are inconsistent, stingy with addresses and insufficient in number. They assume a knowledge of the relative position of major buildings, fail to include far-off destinations or distances and, as a final insult, feature a compass logo that in no way serves as a compass.

I’ve often felt that the worst effort to produce helpful Pedway signs by the laziest student in a Graphic Design 101 class couldn’t possibly be as bad as what’s now posted there.

“It’s very difficult to find your way around if you’re not down there a lot,” said Lorie Westerman, a Chicago Architectural Center docent who designed and leads Pedway tours.

Tribune architecture critic Blair Kamin has written of the Pedway, “It’s as though the system is for insiders only. “

The basic problem is that the Pedway is owned and managed by numerous private entities along its route and by the Chicago Department of Transportation, which oversees the public segments. This explains why portions of it are bright and spruce and others dingy and drab; why certain doors and hallways are locked at certain times and why we’ve yet to see a coordinated effort to make the Pedway truly visitor and tourist friendly.

“There is no Pedway Commission,” said Learner. “The Pedway is still just a lot of pieces spliced together instead of a coherent whole. Even after all these years” — the first passages were designated in 1951 — “it’s not obvious and easy to know exactly where you are and how to get to where you want to go.”

It’s not even obvious how to enter the Pedway from a city sidewalk, as many potential entrance points aren’t labeled.

To my mind, the entire city suffers from a mild case of Pedway Syndrome. Our directional signage — on train platforms, at key intersections and at other major locations — is so skimpy as to feel almost grudging. “If you don’t know that ‘west’ means ‘north’ as you get onto the Kennedy, or that ‘Forest Park’ means ‘take this train downtown’ at Northwest Side CTA Blue Line stations, then you don’t belong here, stranger.”

Last year I interviewed Mike Rawlinson, a founding director of City ID, a design company with offices in New York and the U.K., about “wayfinding,” an emerging concept in urban planning aimed at minimizing just the sort of confusion that has left me tiptoeing around pigeon poop in the dark every time I’ve tried to reach a new destination via the Pedway.

“It’s ironic that cities spend tens of millions of dollars on their infrastructure, and then a pittance on helping people to interpret it, use it and engage with it,” Rawlinson said. He described wayfinding as an effort to orient pedestrians, passengers and motorists that is “part anthropology, part psychology, part geography and part architecture.”

Wayfinding starts with big, clear numerous signs, of course, but also includes lighting, landscaping and other visual cues that can provide subliminal clues, as well as digital information readily available on smartphones.

The considerable promise of the Pedway will never be realized without it.

Learner said the Environmental Law and Policy Center is in regular meetings with business groups and city officials in an effort to “upgrade and vitalize this underutilized city asset” that will include, yes, improved signage.

I never made it back to work that day — just staggered in defeat to the CTA station over city streets.

May my piteous story shame all Pedway stakeholders into action.

The winner of this week’s online reader poll for funniest tweet is “Me: ‘It’s sweet how my cat sits on my chest to comfort me when I’m sick in bed.’ Cat: ‘I think I’ll eat the eyes first.’ ” by @JohnLyonTweets.

If you subscribe to Change of Subject’s free weekly newsletter at chicagotribune.com/newsletters, you will get an email alert when each week’s poll goes live. Ideally you’ll then be inspired to buy a digital or home-delivery subscription to the Tribune or to give such subscription as a perfect holiday gift.