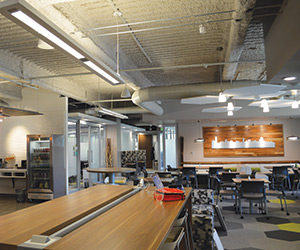 Flexible workspaces are not just for millennial freelancers and tech startups anymore, according to a report from JLL.

The commercial real estate company recently released a report showing flexible work environments are on their way to becoming the new norm, and the number of new office openings in the Great Lakes region has more than doubled in the past five years.

“Most of what we’re seeing is small entrepreneurs,” said Harrison West, JLL research analyst. “Companies that want to have an office if they’ve got four or five employees, but maybe for where they are it doesn’t make sense to sign a long-term lease.”

Coworking spaces are the most common type of flexible office spaces, featuring an open communal environment and shared lounges and amenities, but the report also included executive suits, with more private professional layouts and incubators designed to provide resources for startups and entrepreneurs.

While flexible space currently makes up less than 5 percent of the U.S. office market, West expects it to grow substantially within the next 10 years.

“That’s based on the five-year growth we’ve seen already,” he said. “In markets like Pittsburgh and Detroit, they seem to be popping up all the time. It’s lower than that for GR. There’s certainly room for growth.”

The number of new flexible office locations year over year in the Great Lakes region, as defined by JLL, steadily has risen since 2008. The firm focused on most major metropolitan areas in Michigan, Indiana, Ohio, Kentucky and Pennsylvania.

The amount of new flexible office locations more than doubled in recent years, going from six in 2012 to 13 in 2013.

The number spiked again two years later, with 23 new locations observed in 2015. Last year saw the highest number of new office openings with 33, and at least 18 new offices already have opened in 2018.

Companies can access WorkLab through a paid monthly membership. Custer said clients also have the option to sublease private office spaces for a one-year term or rent out one of their meeting rooms.

“Members can walk in all the time,” he said. “People that have offices have 24/7 access. Everything comes furnished with office furniture and is ready to go.”

Other amenities include Wi-Fi capabilities allowing up to 30 members at a time to connect, a private gym for WorkLab members and access to an adjacent parking structure via the skywalk.

“Part of the reason we’re located here is because of the access to the skywalk … which is important to coworking locations to have easy access to downtown and parking,” Custer said.

WorkLab members must pay for their own parking spaces through the city of Grand Rapids.

Custer said WorkLab’s average age range is in the mid-40s, an older demographic than is expected for a coworking space.

“It’s definitely not geared toward the startup culture,” he said. “These are more established entrepreneurs that are not ready for their own permanent space, but this is a good bridge in between the startup phase and established phase.”

Members usually stay for up to three years before deciding to sign a long-term lease on their own space, Custer added.

WorkLab also has a wide variety of industry representation. Custer said the office is home to a couple of attorneys, technology companies, manufacturers, marketing firms and food service providers.

Allied Mechanical had been there since 2016, but President Steve Huizinga said it was time to bring the office into the 21st century with a more open design.

“We moved in, and it was a typical late ’80s, early ’90s building; 20-foot-by-20-foot monster individual private offices,” Huizinga said. “We can’t do the ‘open office’ plan, but we went with all private offices, and we did all glass partitions.”

The company’s new layout features nine private offices, two workstations and a large custom table in the center. Huizinga said during the design phase, the company originally liked the open-air feel the all-glass cubicles provided, but didn’t intend for it to evolve into a flexible work environment.

“Once we did it, we realized we could roll out and have a conversation at that big custom table,” Huizinga said. “One conversation starts and everybody comes out of their cubes … you find daily there’s four, five guys with a drawing.”

Huizinga added moving into a more open-concept space also has increased company morale and productivity in the preconstruction phase.

Custer said the layout of Allied’s new office was intended to reflect the company’s workflow and added Custer Inc. designs a “palette of places” with different postures and privacy levels.

“That’s a reflection of where our whole industry is going,” Custer said. “We are designing environments that are demanding to be more flexible, just because of the way people work in today’s world.”

While it’s not a true “flexible space,” Huizinga said Allied is now floating somewhere in the middle between traditional and flexible, and perhaps even leaning more toward the flexible. But, he added it’s still important for workers to have their own space for individual work and private meetings.

“In the construction industry, there are not a lot of open offices,” he said. “We still use a lot of paper. We found our guys need desk space to work. They need something to be their own.”