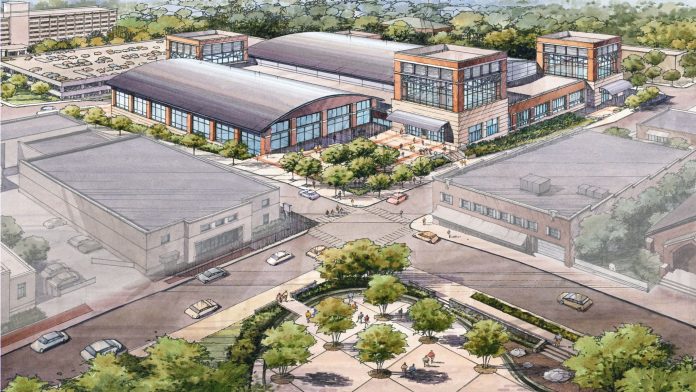 It gave the center’s opponents a chance to air their concerns and for Durrett to respond, and it gave supporters a chance to speak up about the need for the center and what it could do for the community.

And some key new information was presented at the meeting, including that Austin Peay State University’s tenant contract at the site would be for about 30 years. The center would host all of their men’s and women’s basketball games plus the teams’ athletic offices.

The MPEC, as it’s being called for now, would host everything from concerts to ice hockey tournaments to college basketball games on the block bounded by College, Second, Main and First Streets. That’s diagonally across the intersection from the southwest corner of the APSU campus.

The county has a verbal agreement that the Predators would manage the site and its event planning, but nothing has been signed yet.

In providing background on the center, Durrett clarified that it would generate about $20.1 million per year in economic impact, with about $13 million of that from consumer spending — that is from people spending money in nearby restaurants, bars, hotels, gas stations and the like.

How to pay for it

Most of the questions centered on how the county will pay for a center that’s expected to cost about $105 million in land and construction combined.

“I feel confident in our revenue streams,” Durrett said.

He gave some additional detail on those proposed revenue streams:

Combined, they would bring in about $6.5 million per year. Durrett said the hotel/motel tax accounts for about a third of that. The next four items add up to the next third, and the other third would come from the PILOT revenue.

The county is avoiding putting any property tax revenue into the project.

Durrett explained that many years ago, the city and the county invested about $32 million total in the industrial park in order to draw the companies that will soon be making PILOT payments.

He said using the PILOT revenue in this way is reinvesting in the community, and he added that there will be money left over in those funds.

“I think it’s important that we reinvest back in ourselves,” Durrett said. “I’m talking about reinvesting in something that’s going to generate $20 million-plus every year in economic impact in our community, so that means dollars that are coming back to our government.”

With financing, and depending on the total cost, the goal is to have the center paid off within 20 years, Durrett told The Leaf-Chronicle.

In challenging the plans, Steven Currie of Woodlawn brought up examples of what he called similar event centers around the country that have lost money, some of them needing taxpayers to bail them out.

“When this event center doesn’t make enough money to pay the bond payments and the annual operating expenses, how are you going to pay that?” Currie asked.

Durrett emphasized his confidence in the revenue streams, which he called extremely conservative estimates. He also said that citing examples such as the Ford Center in Evansville or the Bridgestone Arena in Nashville isn’t comparing apples to apples. They have different community demographics and arena sizes.

Several people had concerns about traffic and whether the county should focus on that first. Durrett said Montgomery County’s main traffic problems are on state routes. That’s a problem for the Tennessee Department of Transportation to solve, and they have made progress. He cited specifically the state Highway 374 extension, which is in the planning stages.

Some hockey parents spoke up about having to drive to Nashville frequently for hockey practice and training, and all of the money they spend on gas and food there instead of spending it in Clarksville.

What about APSU’s Dunn Center?

When questions arose about what happens to the APSU Dunn Center if the basketball program moves out, university President Alisa White responded, saying that several other groups share the center with the basketball program, including women’s volleyball, health and human Performance classes and offices for other athletic teams.

“The Dunn Center is fully used. So if basketball moves, it gives us more opportunities for the other sports,” she said.

Photos show the condition of a block in downtown at the proposed sight for a downtown events center bordered by 1st, 2nd, Main, and College streets in Clarksville, Tenn., on Friday, May 3, 2019.  (Photo: HENRY TAYLOR/The Leaf-Chronicle)

Durrett characterized the Dunn Center as a 50-year-old, outdated facility.

“What the Dunn Center does not do now,” White said, “is provide much of a fan experience because we don’t have suites, we don’t have the amenities that the new arena would have for basketball.”

Phil Holt of Clarksville Pike was among the supporters who spoke out.

“I was born and raised in Montgomery County, I’m 70 years old, and I’ve been waiting 40 years for this. And if you don’t do it now, I’m not going to live long enough,” Holt said to applause and laughter. “My question is, when will it be open?”

Durrett said that if all goes through, construction could start as early as the spring of 2020, with an opening in the fall of 2021.

The Montgomery County Commission is scheduled to vote on the land purchase at the next meeting, Monday at 7 p.m. at the County Courthouse.

Reach Leaf-Chronicle Editor Chris Smith at [email protected], 931-245-0282 or on Twitter @cssmithwrites. To support his work, consider signing up for a digital subscription at TheLeafChronicle.com.